No Gov. Northam, Your Gun Ban is NOT Constitutional 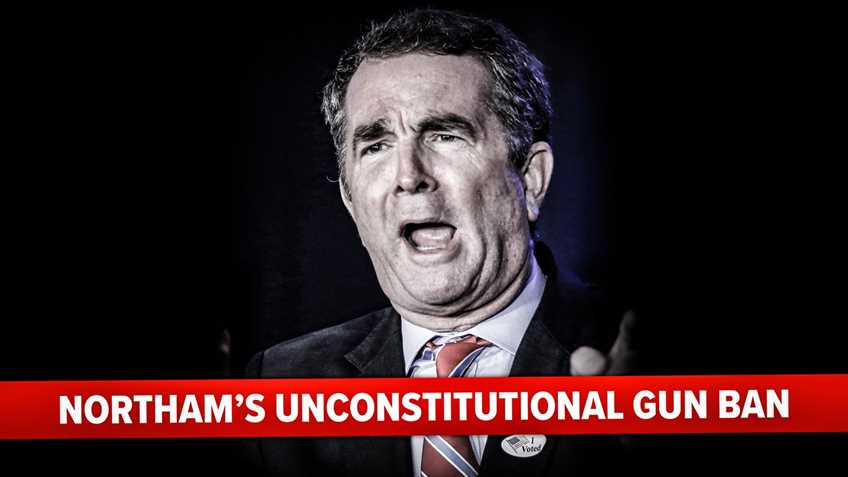 As Virginia gun owners have shown their displeasure with Virginia Gov. Ralph Northam’s proposed attack on their rights in city and county meetings across the Old Dominion, Northam has been forced to answer questions about he and gun control financier Michael Bloomberg’s gun ban agenda. In doing so, the governor has proclaimed that he supports the Second Amendment and that his gun ban does not violate the U.S. Constitution. In truth, Northam’s proposed gun ban would violate the Second Amendment as interpreted by the U.S. Supreme Court in District of Columbia v. Heller and McDonald v. Chicago.

In a Wednesday meeting with reporters, Northam offered a veiled threat to sanctuary jurisdictions that have promised to not enforce unconstitutional gun laws stating, “If we have constitutional laws on the books and law enforcement officers are not enforcing those laws on the books then there are going to be some consequences…” The governor went on to say “Any law that we pass in Richmond and the 8 pieces of legislation that I put on the table back in July - they’re constitutional, so that’s not going to be an issue.”

Banning commonly-owned semi-automatic firearms under either proposal is unconstitutional. The U.S. Supreme Court has made clear that governments cannot ban these firearms as they are “in common use” for lawful purposes.

Taken alone, Justice Antonin Scalia’s opinion in Heller is enough to dispose of Northam’s comments. In the decision, Justice Scalia made clear that the types of firearms protected by the Second Amendment include those “in common use at the time” for “lawful purposes like self-defense.”

The firearms industry has estimated that Americans own more than 17.5 million semi-automatic rifles. The AR-15 is the most popular rifle in the U.S. and therefore indisputably “in common use” and protected by the Second Amendment.

Further, in the 1994 case Staples v. United States, the Supreme Court determined that semi-automatic rifles were common. The case concerned the criminal intent requirement for a conviction for possession of an unregistered machine gun. The subject of the case had argued that he was unaware that the AR-15 in his possession had been modified for automatic fire and was not simply a legal semi-automatic AR-15. In the majority opinion, Justice Clarence Thomas made clear that the mere possession of a converted AR-15 is not enough to infer intent sufficient for conviction, as some firearms are “so commonplace and generally available that we would not consider them to alert individuals to the likelihood of strict regulation.” Justice Thomas went on to write that most categories of guns, including semi-automatic rifles, “traditionally have been widely accepted as lawful possessions.”

Northam’s attempt to portray his Bloomberg-sponsored gun ban as constitutional is an absurd and transparent attempt to forestall the surging Virginia grassroots gun rights movement. Virginia’s gun owners have every reason to take defensive action against Northam and Bloomberg’s unconstitutional gun control agenda.

All Virginia gun owners must organize to fight against unconstitutional Bloomberg-backed gun control in the Old Dominion. Please contact Gov. Northam and let him know you oppose his unconstitutional gun control measures. You can contact Northam using the Governor's Office contact form below or call his office at 804-786-2211​.

Stay tuned to www.nraila.org for updates. And, in the meantime, please sign up to volunteer to help defeat Northam and Bloomberg’s gun control legislation.