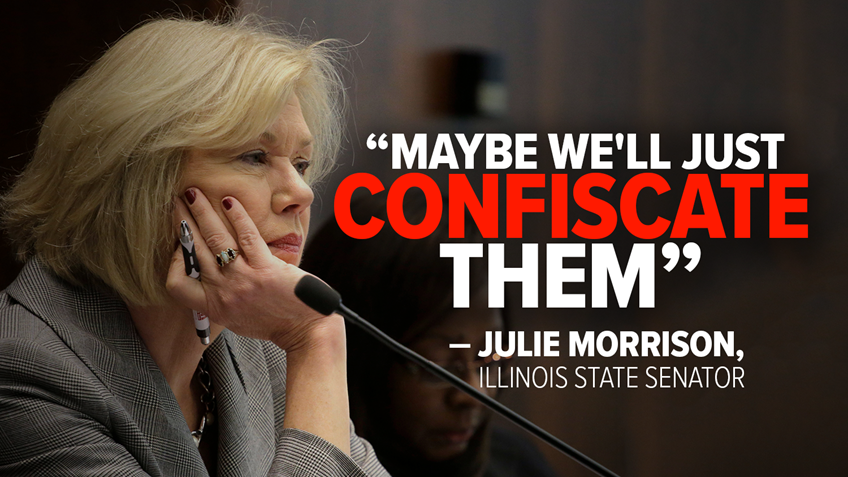 Anti-gun lawmakers, including some of those vying for the 2020 Democratic presidential nomination, are becoming increasingly open about their desire to confiscate firearms from law-abiding citizens and jail those who don’t comply. Perhaps taking a cue from their strident federal allies, this trend has trickled down to state politicians.

The bill would have branded many modern semi-automatic rifles, semi-automatic handguns, and shotguns commonly owned by law-abiding citizens as “assault weapons” and banned them along with spare parts and accessories. The legislation permitted current owners to continue to possess these firearms if the owner registered the firearm with the state and paid a $25 fee for each gun.

At the "townhall," a constituent confronted Morrison about her bill, asking why it was acceptable for the lawmaker to push legislation that would take firearms away from law-abiding citizens unless they registered their guns and paid a fine. The exchange was captured on video by an ISRA supporter.

After pointing out the punitive nature of the legislation, the gun rights supporter asked Morrison, "If I get to keep it if I pay a fine and register it, how dangerous is it in the first place and why do you need to ban it at all? Why do you need to try to ban my semi-automatic firearms?

With a repellant smugness that can only be appreciated by watching the video, Morrison offered her constituents a flippant response. Literally looking down her nose at those gathered, the state senator replied, "Well you’ve just maybe changed my mind. Maybe we won’t have a fine at all. Maybe it’ll just be confiscation and we won’t have to worry about paying a fine."

Astute gun rights supporters have long-understood that the ultimate goal of anti-gun politicians is to confiscate firearms from law-abiding gun owners. What sets Morrison’s conduct apart is that it is an almost perfect encapsulation of the contempt gun control supporters have for their fellow citizens. Gun rights supporters and all those who value personal freedom should share this video in order to show others the arrogant indifference with which these lawmakers treat their constituents’ constitutional rights.