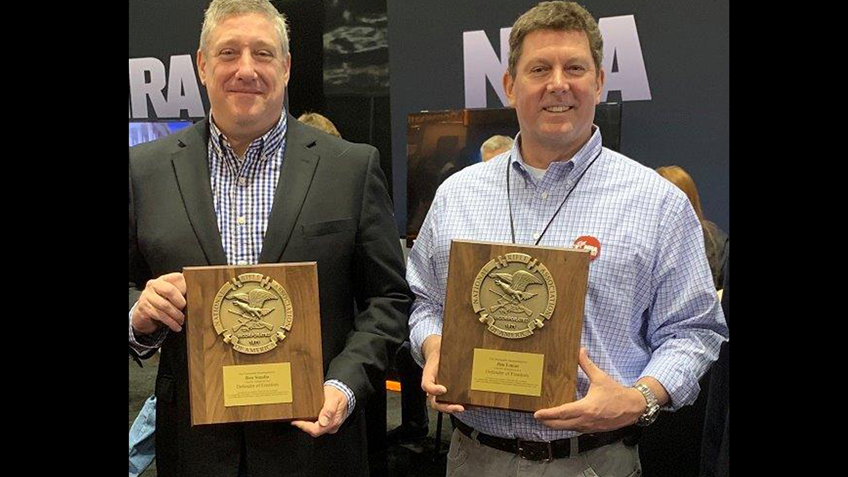 “This year Jim Lucas and Ben Smaltz succeeded in passing legislation to expand self-defense options for Hoosiers,” said Chris Kopacki, NRA-ILA Indiana state director. “This award honors Lucas and Smaltz for leading the fight in Indiana to promote our fundamental right to self-protection.”

“I thank Representatives Lucas and Smaltz for their unwavering commitment to freedom,” concluded Kopacki.

At the NRAAM in Indianapolis, Gov. Eric Holcomb signed into law Lucas and Smaltz’s comprehensive gun rights bill that makes it easier for law-abiding Hoosiers to defend themselves. The new law, which includes proposals introduced by both Lucas and Smaltz, expands self-defense options in the following ways:

Under this new law, honest, hard-working gun owners will no longer be forced to pay taxes and fees to exercise a fundamental right that ought to be free. This law ends this abuse and ensures that the most vulnerable gun owners are able to protect themselves without worrying about the cost of a license.

Additionally, the new law provides greater protection to gun owners. Previously, an undue burden was on the defendant in exercising the right to self-defense. Under the new law, that burden is shifted.  In addition, a person who acts in self-defense and is later forced to defend themselves a second time in court can be reimbursed for the legal fees associated with their defense.