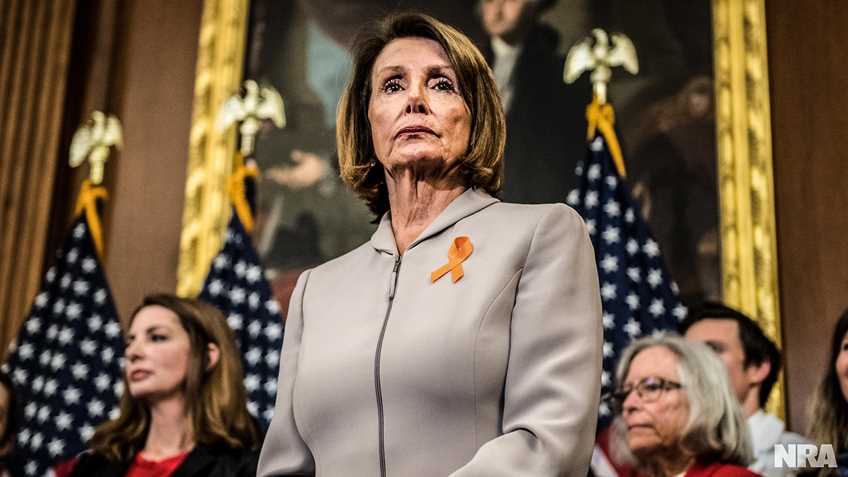 The Nancy Pelosi Speaker Era 2.0 continued on Wednesday, Feb. 13, with a markup of H.R 8, the “universal” background checks bill, in the House Judiciary Committee. Following on the heels of last week’s Judiciary Committee hearing, the same committee held a markup on Wednesday, where amendments and corrections to H.R. 8 could be considered. Unfortunately, the markup was clearly designed to allow the anti-gun Democrats who control the Judiciary Committee to grandstand and promote attacks on law-abiding gun owners, rather than consider efforts to combat violent crime.

It was clear from the outset that the anti-gun Democrats had no interest in considering reasonable approaches to addressing violent crime. The committee’s Ranking Member, Doug Collins (R-Ga.), offered the first amendment to the bill, which sought other approaches to combating crime rather than “universal” background checks, which study after study have shown to be ineffective, or their effectiveness inconclusive. His amendment was simply dismissed as not germane, without any discussion of its merits.

Please Contact Your U.S. Representative and Ask Them to Vote Against H.R. 8 and H.R. 1112!

Representative F. James Sensenbrenner (R-Wisc.) offered the next amendment. It simply sought to add to the list of exemptions from the “universal” background check requirements anyone who possessed a valid permit to carry a firearm. Adoption of the amendment would have still left the bill as an anti-gun mess, but it was a reasonable proposal considering carry permit holders already undergo a background check in order to obtain their permits. The anti-gun majority made clear they were not interested in anything reasonable, and the amendment was defeated.

The Sensenbrenner amendment was attacked by anti-gunners on the committee with ridiculous arguments and inaccurate information. Committee Chair Jerrold Nadler (D-N.Y.) objected because not all states that issue permits to carry firearms require any training, even though the “universal” background checks mandated by H.R. 8 have no training requirements.Representative David Cicilline (D-R.I.) objected because, according to him, some states have no issuing requirements for permits, which is patently false. Other anti-gun legislators tried to claim that some states that issue permits after an applicant has submitted to a background check actually don’t check an applicant’s criminal history.

This process repeated itself throughout the day, with other amendments seeking to make even minor improvements to a monumentally bad piece of legislation being rejected similarly, either voted down or ruled not germane, by the anti-gun majority and Chair. This includes simple amendments that merely sought to put a cap on the fees that could be charged for a “universal” background check.

The Chair even spoke out against an amendment that sought to exempt victims of domestic violence from “universal” background check provisions of H.R. 8 by raising the concern of “evidentiary standards” when determining if the victim is actually a victim, even though anti-gun politicians have consistently refused to acknowledge “evidentiary standards” when promoting legislation to strip gun owners of their firearms.

After several hours, H.R. 8 was passed after anti-gun Democrats rejected every amendment offered by Republicans. The Judiciary Committee then took up H.R. 1112, legislation that would change current law that allows an FFL the option to transfer a firearm after three days if a NICS check is delayed. That discussion was much shorter, being dealt with in under an hour.

Although the actual language for H.R. 1112 has still not been made available on Congress.gov, as anti-gun Democrats have been apparently trying to rush legislation to the floor before it is truly ready for consideration, Chairman Nadler explained that the bill would extend the “delay” period from three days to 10 business days. However, after 10 business days, the transfer is not allowed to go through. The prospective purchaser must first file a petition with the Attorney General. If a “proceed” message is still not received 10 business days after the filing of the petition, only then may the transfer go through. However, NICS checks are only valid for 30 calendar days, so this new proposed proceed provision appears to be practically worthless because in almost all scenarios it will take more than 30 calendar days to accomplish.

The entire premise of H.R. 1112 is predicated on the notion that it would have prevented the horrific murders committed in Charleston, S.C., on June 17, 2015. Proponents have argued that the perpetrator of that crime would not have been able to commit his crime if the background check had taken longer. That, however, is simply not true, as the violent murderer was not prohibited from purchasing the firearm he used and his terrible crime took place more than two months after he first attempted to buy a firearm, so even the extended delay of H.R. 1112 would have had no effect in his case.

Ranking Member Collins may have best summarized this week’s markup and last week’s hearing in his opening remarks on Wednesday, when he stated, “I’m sad the bill before us represents another missed opportunity to prevent violence in our communities.” Neither H.R. 8 nor H.R. 1112 will do anything to address violent crime, but both will surely create problems for otherwise law-abiding gun owners and prospective gun owners.

Please thank Ranking Member Collins and the 13 other members of the House Judiciary Committee who voted against the misguided and ineffective legislation that is designed to score political points, not address crime, violence or mental health.

Please use this link to let your elected officials know that you won’t be blamed for the actions of violent criminals.  Ask your Representative to oppose H.R.8 and H.R 1112. Additionally, you may call your U.S. Representative using the Capitol switchboard at 202-224-3121.

Support For New Restrictions On Firearms Has Taken A Nosedive