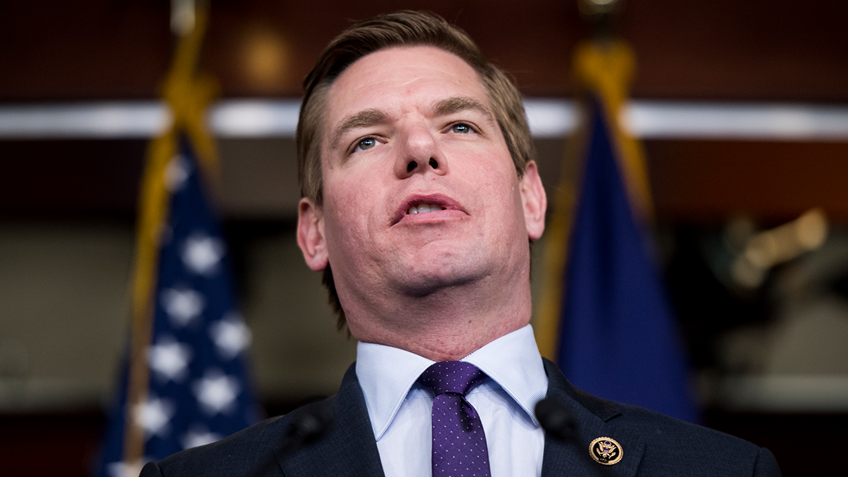 Well, it’s almost Thanksgiving, and nothing gets you into the holiday spirit like a U.S. Congressman who raises the specter of unleashing a nuclear attack against fellow Americans to demonstrate just how darned committed he is to mass firearm confiscation.

For those looking for yet another reason to purchase modern semiautomatic firearms and extra magazines for yourselves and your loved ones on Black Friday, we give you the recent comments of Rep. Eric Swalwell (D-CA).

Swalwell, you may recall, gained some headlines for himself earlier this year when he proposed banning various semiautomatic firearms, forcing current owners to surrender them to the government, and “go[ing] after” resisters.

Last week, he made it clear in a Twitter exchange that he meant what he said.

Responding to another Twitter user who commented that an attempt to repeal the Second Amendment and ban and seize guns would provoke a war, Swallwell stated: “And it would be a short war my friend. The government has nukes. Too many of them. But they’re legit.” He added, “I’m sure if we talked we could find common ground to protect our families and communities.”

When confronted with the obvious import of his words – that he was suggesting nuclear weapons could be used on American soil against resisters of firearm confiscation – Swalwell backpedaled and tried to reframe his comments.

“Don’t be so dramatic,” he tweeted. “No one is nuking anyone or threatening that. I’m telling you this is not the 18th Century. The argument that you would go to war with your government if an assault weapons ban was in place is ludicrous and inflames the gun debate. Which is what you want.”

Later, as backlash continued to mount, Swalwell changed his story again and claimed his reference to America’s nuclear arsenal was merely a “joke” and “sarcasm.”

So which Swalwell story are we supposed to believe?

If it’s the first one, there’s apparently no option that he would consider off the table for enforcing firearm confiscation. This includes destroying entire communities, killing untold numbers of innocent bystanders, rendering large areas of land uninhabitable, all to annihilate (and presumably make an example of) anyone who stood in the way of his plans.

If it’s the second one, he’s pointing out that the idea of resisting a federal firearm confiscation order is “ludicrous” because the 18th Century’s relative parity between the unorganized militia and the then-recognized government no longer exists, even if the nuclear option is off the table. Yet this also implies that he could foresee using sophisticated military technology other than nuclear weapons against resistors.

If we’re to believe the third story, we’re all just too stuffy and serious to recognize the obvious comedic intent the U.S. Congressman had when he referenced nuclear weapons in describing the futility of anyone resisting the government’s attempt to violate their fundamental constitutional rights. The historical basis of the Second Amendment, in other words, is but a joke to Eric Swalwell.

Whatever option you choose, it is incredible even by the low standards of modern political rhetoric that Swalwell would be the one accusing others of being “dramatic” and “inflam[ing] the gun debate. ...we just don’t see anything funny about politicians and reporters whose idea of a joke is threatening to bomb fellow Americans or slandering law-abiding Americans for exercising their constitutional rights.

And even if didn’t mean what he actually said (always a possibility with anti-gun politicians), we can still give thanks this Thursday that Eric Swalwell is not and almost certainly never will be trusted with the launch codes for America’s nuclear arsenal.

But it’s perhaps not surprising that he could be so cavalier about subjects many gun-owning Americans take very seriously. Despite the political left’s mantras of tolerance, diversity, and inclusion, many are proudly ignorant of and indifferent to the types of lives led by millions of ordinary Americans who happen not to inhabit America’s largest coastal cities.

Also weighing into Swalwell’s Twitter debacle this week was Nina Burleigh, Newsweek’s national politics correspondent and, according to her official Newsweek bio, “an award-winning journalist and the author of five books.”

With such impressive journalistic credentials covering U.S. politics, you would think that Ms. Burleigh would have at least caught on that AR-15s and similar guns are common and popular firearms in America, even if she didn’t know that they are in fact America’s most popular class of rifles.

But to think so would be overestimating Nina Burleigh.

As Swalwell attempted to reframe his initial tweet, Burleigh leapt to his defense with a tweet of her own aimed at the NRA’s Dana Loesch: “Almost every single person I’ve ever heard of with an AR-15 has been a mass murderer. Based on Twitter sample the rest of them are scarily paranoid. Get on the right side of history.”

And even if it’s possible that Burleigh herself doesn’t personally know a single one of the many, many millions of Americans who own and lawfully use AR-15s and other semiautomatic rifles, you might think she would have at least read about some of them, again considering she works in the media.

For example, she might have read about Stephen Willeford, who used his AR-15 to end a mass shooting in a Texas church and to prevent the perpetrator from escaping.

There’s also Sarah Merkle, who as a 15-year-old testified against the then-pending ban in Maryland on AR-15s and similar semiautomatic rifles. She explained that the AR-15 was the type of rifle she used as a member of the Maryland State Rifle Team and that her competitive accomplishments provided her with college scholarship opportunities she otherwise would not have had. She also explained that rifles of any type are used in only a very small percentage of firearm-related homicides in the U.S.

Also making the news as an AR-15 owner was U.S. Sen. Lindsey Graham (R-SC), who during the debate over the Democrats’ proposed “assault weapons” ban in 2013 noted that "I own an AR-15 and I have done nothing wrong by owning the gun.”

Of course, we cannot rule out the possibility that Burleigh was also joking and that we just aren’t sophisticated to understand her rapier-like wit.

Call us party poopers, but we just don’t see anything funny about politicians and reporters whose idea of a joke is threatening to bomb fellow Americans or slandering law-abiding Americans for exercising their constitutional rights.