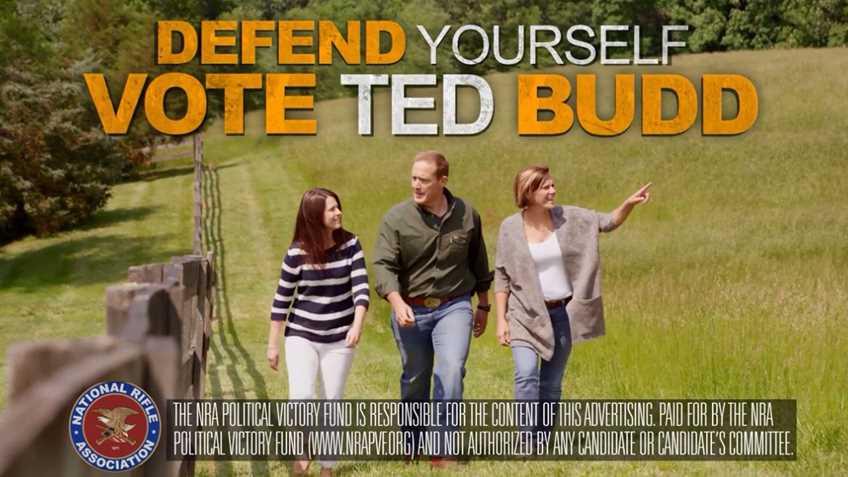 Fairfax, Va.— The National Rifle Association Political Victory Fund (NRA-PVF) has launched an ad campaign to inform voters in North Carolina’s 13th Congressional District that their right to self-defense is on the ballot in November. The television ad, Woman Working Late, will air on cable and broadcast stations.

“The Second Amendment right to self-defense is on the ballot this November,” said Chris W. Cox, NRA-PVF Chairman. "Ted Budd is the only candidate in this race who will continue to oppose the Pelosi/Bloomberg gun control agenda and defend our constitutional freedoms."

The ad features a woman leaving work late at night.  As she leaves work and enters her car she is attacked. When she reaches for her firearm it disappears. The ad illustrates the real life and death consequences of the Pelosi/Bloomberg gun control agenda.
​
Budd strongly opposes the Pelosi/Schumer/Bloomberg gun control agenda and will vote for legislation to protect and expand Americans’ Second Amendment freedoms.  He voted for concealed carry reciprocity legislation, which would ensure that the nearly 20 million law-abiding Americans who can carry a concealed firearm in their home state are able to legally carry concealed across state lines. He also voted to protect veterans’ Second Amendment rights and opposes bans on commonly owned rifles and ammunition.

Budd’s opponent, Kathy Manning, is an “F” rated candidate who would act as a rubber stamp for Nancy Pelosi’s gun control agenda.  She opposes concealed carry reciprocity and wants to criminalize private firearm transfers between lifelong friends and many family members.​​

“We can count on Ted Budd to stand up for our constitutional freedoms in the U.S. House,” concluded Cox. "The NRA urges all members, Second Amendment supporters and sportsmen in North Carolina’s 13th Congressional District to vote Ted Budd for Congress on or before November 6.”

(Turns lights off. Last one to leave.  Walks across parking lot. Gets in car. Suddenly an attacker lunges at the car.)

Announcer: It can happen fast.  And the only person who can stop it, is you.

Announcer: But anti-gun liberals want to take away your right to self-defense. That’s why we need Ted Budd in Congress. Ted Budd will always protect our right to own a gun for self -defense. Ted Budd: endorsed by the NRA.

The NRA Political Victory Fund is responsible for the content of this advertising.​

Hunting and fishing a part of North Carolinians’ heritage