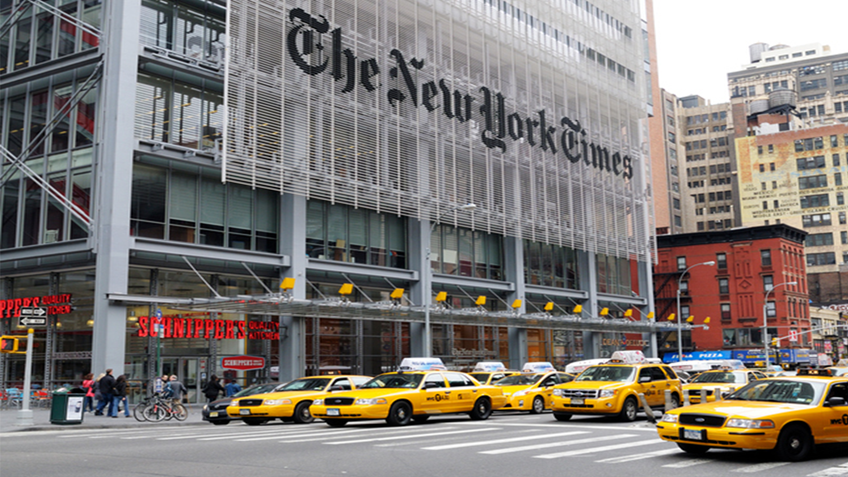 It turns out the New York Times and its readers have their own version of this phenomenon, as depicted in a lavishly illustrated, full-color photo-essay first published online Tuesday (coincidentally the same day the normally liberal Ninth Circuit ruled that public open carry is protected by the Second Amendment). Their version, however, tantalizes its adherents with vivid images of mass firearm destruction. What reader of the New York Times, after all, doesn’t fantasize about the day when America’s guns finally meet their long-destined hour of reckoning in the fiery depths of a steel mill’s furnace?

Entitled “Where Guns Go to Be Reincarnated,” the piece actually indulges two liberal fetishes: industrial-scale firearms destruction, coupled with repurposing of the material for things like publicly funded infrastructure projects. And if gun melts and recycling are not enough of a sensory overload, the pictures are accompanied by lurid text, suggesting that the real solution to America’s “unwanted guns” is to “[t]hrow them into a giant caldron, heat them up to 3,000 degrees Fahrenheit and liquefy them into an orange ooze.”

The first picture sets the tone: a mass of what are mostly shotguns and revolvers, predominantly with wooden stocks, lays broken and debased amid a pile of industrial garbage, with licenses plates from Minnesota peeking out from the rubble. The picture’s subtext is clear and ominous: No gun will be left in the end. We will march into the Heartland itself and grab whatever six-shooters or break-action bird guns you thought would always be safe.

The online version also features animation. An unimaginably hot furnace spews a molten billet of glowing steel through a cooling bath onto a conveyer belt. The capture assures viewers it is made from “melted firearms.”

Further on are pictures of giant magnets grabbing firearms en masse for consignment to the abyss.  Police officers and mill workers are shown holding what appear to be perfectly intact and functional firearms. They have been surrendered, the text tells us; they have been seized. They will in some cases become art, the author exults, or even garden tools.

Don’t worry, the author seems to assure her readers. There will be plenty of capacity, even for America’s 400 million guns. She writes:

A magnetic crane then hoists the firearms and plops them into a bucket that can hold 45 tons, which is driven into a warehouse. There, the bucket is positioned over a furnace, and at the right moment, its bottom opens like a clamshell.

The guns tumble into a pool of molten metal, causing a small fireball … . The weapons, heated by arcs of electricity, dissolve inside the furnace.

Caravans of box trucks and trailers carrying firearms can be accommodated by the mill, we’re told.

Dream on, you gun-chopping freaks.

And they will, to be sure. If they can imagine and depict the end of days for gun ownership in America, they believe they can make it a reality.  Elite “reformers” are determined to do whatever it takes, up to and including genetic engineering to improve the “moral decisions” of future Americans to counteract our supposed inability or unwillingness to “enact the kind of political change that might save us from us.”

For now, at least, these fantasies might seem like a distant nightmare to the rest of us. Indeed, to gun owners, the pictures in the New York Times piece merely recall other historic infamies that turned industrial might into the engine of destruction

That’s why it’s up to us who value American freedom and the tools that preserve it to ensure that the readers of the New York Times never get the happy ending to civilian gun ownership they crave.