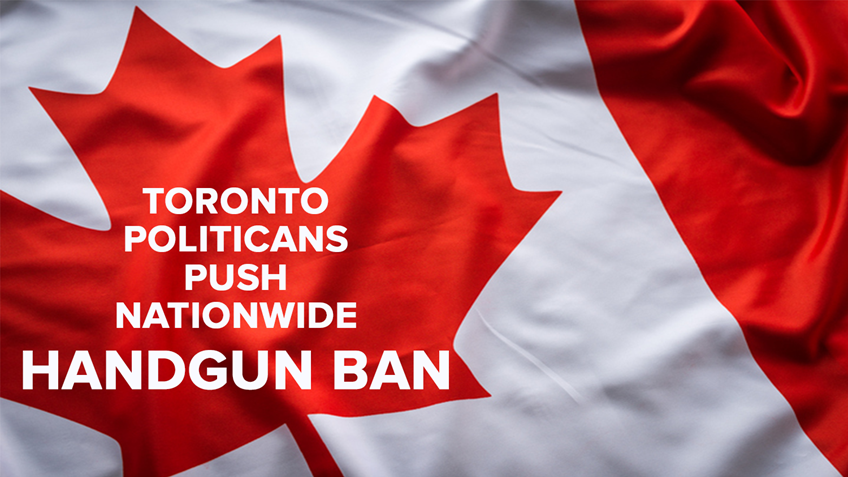 Canadian gun control advocates’ goal of civilian disarmament came further into focus this week following a tragic shooting Sunday in Toronto that killed two people and wounded 13. As law enforcement officials were still working to determine where attacker Faisal Hussain had obtained the pistol used in the shooting, various Toronto politicians called for a total ban on the sale or possession of handguns in Canada’s most populous city and for federal legislation that would ban the sale and possession of all handguns and semiautomatic firearms nationwide. Canada’s Liberal-led federal government has expressed its support for further gun control, and is reported to be contemplating a total handgun ban.

Access to handguns is already heavily restricted in Canada. In order to possess any firearm, an individual must obtain a Possession and Acquisition Licence, or PAL. License applicants are required to provide the Royal Canadian Mounted Police with a host of personal information, and are asked intrusive questions about their mental health history and even their current and former “conjugal partners.” The applicant must also provide references and show proof that they have completed the Canadian Firearms Safety Course.

Further, Canadian law classifies all handguns and certain semiautomatic long guns as “restricted.” In order to possess these firearms, a PAL applicant must also show proof that they have completed the Canadian Restricted Firearms Safety Course. All restricted firearms must be registered with the federal government.

For more information on Canada’s gun laws, visit the Library of Congress website at http://www.loc.gov/law/help/firearms-control/canada.php.

Shortly after the shooting, information surfaced about Hussain’s lengthy history of severe mental illness. According to a report from Global News, “Hussain had previously been apprehended by Toronto police twice under the mental health act.” This, in part, led a Toronto attorney to tell the news outlet, “It doesn’t look like a guy who legally purchased a weapon, at this point in time, from the information we have.”

On Wednesday, CTV reported that the gun was likely to have come from a “gang-related source” and that “a police source” had said that “the semi-automatic handgun used in the shooting is illegal in Canada and was originally from the United States.” A CBC report indicated that “there is reason to believe” Hussain obtained the firearms illegally from his brother. Another report from Global News stated that the firearm had been traced to a burglary at a Saskatchewan gun dealer.

Hussain’s brother had faced drug and weapons charges before slipping into a coma last year, and was reportedly an associate of one Maisum Ansari. In September 2017, police raided Ansari’s property, where they discovered 33 firearms and 42 kilograms of the fentanyl analog carfentanil. According to Global News, “Ansari was charged with 337 firearm-related offences and is currently out on bail.”

Despite the evidence that Hussain obtained the pistol used in the shooting in contravention of any number of Canadian, and potentially foreign laws, Canadian politicians have used the occasion of this tragedy to push for even more gun laws.

In a statement Monday to the Toronto City Council, Mayor John Tory called for a ban on firearms in the city. Tory stated,

You’ve heard me ask the question of why anybody would need to buy 10 or 20 guns, which they can lawfully do under the present laws. And that leads to another question we need to discuss: Why does anyone in this city need to have a gun at all?

On Tuesday, the Toronto City Council passed a series of extreme gun control resolutions. A motion offered by Councillor Joe Cressy urged the Canadian Federal Government to “to ban the sale of handguns in the City of Toronto,” and prompted the Ontario Provincial Government “to ban the sale of handgun ammunition” in the city. Cressy’s motion also directed the city manager to explore ways in which the city itself could act to hamper handgun sales.

the availability, sale, possession and use of handguns, assault rifles and semi-automatic firearms in Canada, with the exception of the Canadian Armed Forces, police services or other entity that is authorized to possess firearms with legal obligations imposed by the municipal, provincial and federal governments.

The council also adopted a motion requesting the federal government enact legislation that would eliminate the domestic possession of all firearms nationwide. The language, offered by Councillor Jim Karygiannis, read,

That City Council request the Federal Government to enact legislation… to create gun repositories that require all long guns and hand guns to be locked up and only retrieved if and where there is a need for hunting or going to the range for target practice, such repositories to be developed in a private-public partnership.

The city council adopted a pair of resolutions offered by Councillor Janet Davis aimed at harassing the shooting ranges and gun clubs in Toronto. One motion called to “investigate any operating gun clubs with a shooting range in the City of Toronto to determine if they are operating legally and take appropriate action if required.” A more aggressive measure was aimed at shutting down gun ranges, calling on the city to “investigate and determine the feasibility of acquiring and repurposing the remaining gun clubs with shooting ranges in the City of Toronto for civic purposes.”

As for federal officials, Public Safety and Emergency Preparedness Minister Ralph Goodale told the press that the federal government was prepared to consider further restricting handguns as part of a their larger effort to enact gun control legislation with Bill C-71. The Globe and Mail has reported that, “A proposal to ban handguns is under serious consideration, according to a senior official, who was not authorized to speak on the record.” According to the account, “Goodale and senior civil servants have been tasked with examining the idea of a ban.” In a rather candid exhibition of narrowmindedness, while arguing for further restrictions, Parliamentary Secretary for Housing and Urban Affairs Adam Vaughan stated, “My personal perspective. I don't own a gun and I can't see why anyone else would.”

If any of the differing reports on how Hussain illegally obtained the firearm used in the killings is accurate, it’s difficult for gun control supporters to make a plausible argument that any of their proposals would have impeded a criminal, or possibly a gang of criminals, already acting well outside the law. Rather than make any cogent attempt to address the Greektown shooting, anti-gun politicians have opted to attack Canada’s firearms community and culture. The scope and incongruity of the Toronto government’s assault on the rights of Canada’s law-abiding gun owners reveals a breathtaking intolerance and makes clear that officials intend to use the recent tragedy as pretext to advance a pre-existing anti-gun agenda.