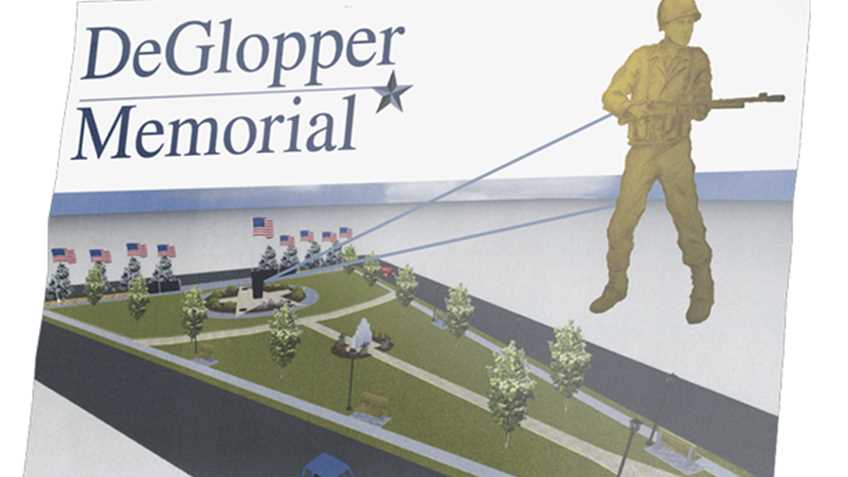 As difficult as it may seem, anti-gun tactics have reached a pathetic new low. We regret to report that some on the anti-gun left, in their fanatical intolerance of all things firearms, now find it acceptable to attack monuments honoring World War II Medal of Honor recipients.

Grand Island, N.Y. is home to Charles N. DeGlopper Memorial Park. The memorial honors the city’s hometown hero, who posthumously received the Medal of Honor for his valor during the invasion of Normandy.

According to the citation found at the U.S. Army Center of Military History, when Pfc. DeGlopper’s platoon became separated from the rest of his company, he volunteered to supply suppressing fire from his Browning Automatic Rifle (BAR) while his comrades withdrew. In order to fire upon the German position, DeGlopper exposed himself to enemy fire and was wounded. According to the account, “Kneeling in the roadway, weakened by his grievous wounds, [DeGlopper] leveled his heavy weapon against the enemy and fired burst after burst until killed outright.” The citation goes on to explain, “In the area where he made his intrepid stand his comrades later found the ground strewn with dead Germans and many machineguns and automatic weapons which he had knocked out of action.”

The local Veterans of Foreign Wars post and others in the community have sought to expand the Grand Island memorial honoring DeGlopper. The centerpiece of their proposal is a statue of DeGlopper wielding the BAR he used to protect his comrades.

To pursue the project, the memorial’s backers requested $150,000 from the Buffalo & Erie County Greenway Standing Committee. According to the Buffalo News, the committee funded $2 million in other requests but denied the funding for the DeGlopper Memorial.

It should be noted that there were a reported $4 million in requests during the funding cycle, so the DeGlopper memorial was not the only project to face the chopping block. Further, local officials contend that their decision was strictly financial. However, many residents are suspicious that the statue of DeGlopper was scrapped because it featured the hero wielding a firearm.

The reason for their concern stems from a bizarre November 2017 op-ed penned by Sierra Club Niagara Group Conservation Chairman Larry Beahan. In it, Beahan explained that as part of his position with the Niagara Sierra Club affiliate he helps to assure the “appropriateness” of Greenway spending. Beahan then proceeded to explain just how inappropriate a statue of DeGlopper carrying a firearm would be.

Beahan likened DeGlopper’s gallantry to the heinous actions of the Las Vegas shooter and those of the murderer in Sutherland Springs, Texas, even going so far as to contend that the fully-automatic BAR was the “AR-15 of its day.” In his zeal to smear the proposed statue, Beahan disregarded the facts of the Sutherland Springs shooting by claiming that “a bystander brought [the shooter] down with a shotgun.” In fact, NRA Member Stephen Willeford stopped the shooting with an AR-15.

Beahan later told the Buffalo News that he wrote the op-ed with the intention of influencing the Greenway Commission. The Sierra Club Niagara Group chairman went on to tell the paper, “Let's not make our kids worship heroes who are killing people.”

Despite ostensibly being a conservation organization, the national Sierra Club has an official policy position in support of gun control. Specifically, the group backs a ban on commonly-owned semi-automatic firearms, the criminalization of private transfers, and a ban on traditional ammunition. That Beahan used his position with the group to advocate against the DeGlopper statue will make some wonder whether the national Sierra Club supports or at least tacitly approves of this radical position regarding depictions of our fallen soldiers.

Should Americans expect the Sierra Club’s Washington, D.C. chapter to advocate for the removal of the Three Servicemen statue honoring our Vietnam veterans or the Korean War Veterans Memorial? Will the Massachusetts chapter take issue with Lexington and Concord’s Minutemen statues?

DeGlopper Memorial supporters have taken to local media to register their disgust over the rejection of the statue proposal. Local activist Rus Thompson said, “It's because of the gun… I mean, we didn't win World War II by using sticks, you know? We used guns. He got killed by a gun. DeGlopper stood up there and took how many rounds of fire to save how many guys? And they're going to take away his gun?” Grand Island Town Councilman Mike Madigan told Buffalo’s WKBW, “To rewrite history and to make war look like it's peaceful and it doesn't involve guns is not an appropriate depiction.”