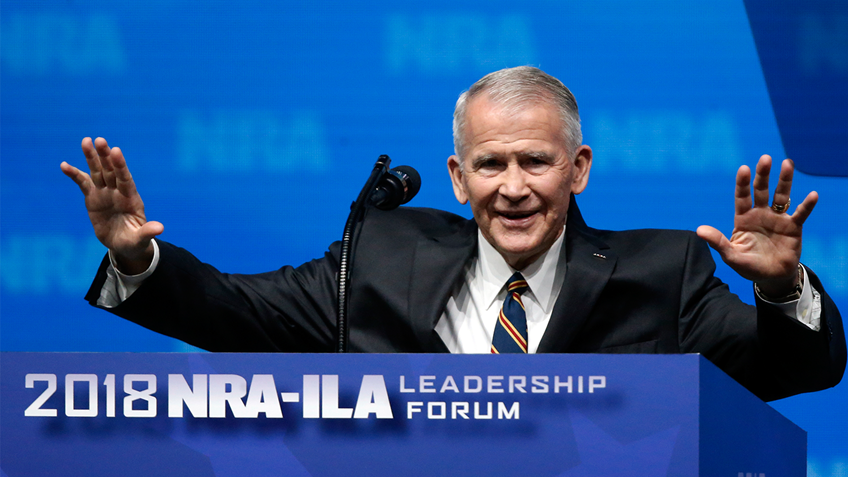 DALLAS – Lt. Colonel Oliver North, USMC (Ret.) will become President of the National Rifle Association of America within a few weeks, a process the NRA Board of Directors initiated this morning.

“This is the most exciting news for our members since Charlton Heston became President of our Association,” said NRA Executive Vice President and CEO Wayne LaPierre.  “Oliver North is a legendary warrior for American freedom, a gifted communicator and skilled leader.  In these times, I can think of no one better suited to serve as our President.”

North said he was eager to take on this new role as soon as his business affairs were put in order.  North is retiring from Fox News, effective immediately.  “I am honored to have been selected by the NRA Board to soon serve as this great organization’s President,” North said.  “I appreciate the board initiating a process that affords me a few weeks to set my affairs in order, and I am eager to hit the ground running as the new NRA President.”

The NRA Board acted quickly to begin the process for North to become President, after former NRA President Pete Brownell announced this morning that, in order to devote his full time and energy to his family business, he had decided not to seek election to a second term.  In his letter to the Board, Brownell wholeheartedly endorsed North for President.

“Discussing this with Wayne LaPierre,” Brownell said in the letter, “he suggested we reach out to a warrior amongst our board members, Lt. Colonel Oliver North, to succeed me.  Wayne and I feel that in these extraordinary times, a leader with his history as a communicator and resolute defender of the Second Amendment is precisely what the NRA needs.  After consulting with NRA-ILA Executive Director Chris Cox, First Vice President Childress and Second Vice President Meadows, I can report there is extraordinary support for Lt. Colonel North.”

“Pete has served the NRA with great courage and distinction,” LaPierre said.  “I am grateful that he joined me in enthusiastically recommending Oliver North to the Board of Directors.”

After the announcement, NRA First Vice President Richard Childress informed the board that he had multiple commitments in the next several weeks and was unable to be immediately available to serve as interim President.  The Board then selected Second Vice President Carolyn Meadows to serve as its interim President.  Meadows will step aside in a few weeks, when Lt. Colonel North is prepared to take on his new role as NRA President.

LaPierre congratulated the NRA Board for its action.  “The board acted quickly and with great vision,” LaPierre said.  “Oliver North is, hands down, the absolute best choice to lead our NRA Board, to fully engage with our members, and to unflinchingly stand and fight for the great freedoms he has defended his entire life.”

“Oliver North is a true hero and warrior for freedom,” LaPierre said, “and NRA members are proud to stand with him.”

IN THIS ARTICLE
Texas Oliver North Board of Directors
TRENDING NOW