Cutting the Data: Strong Interest in Suppressors Continued in 2017 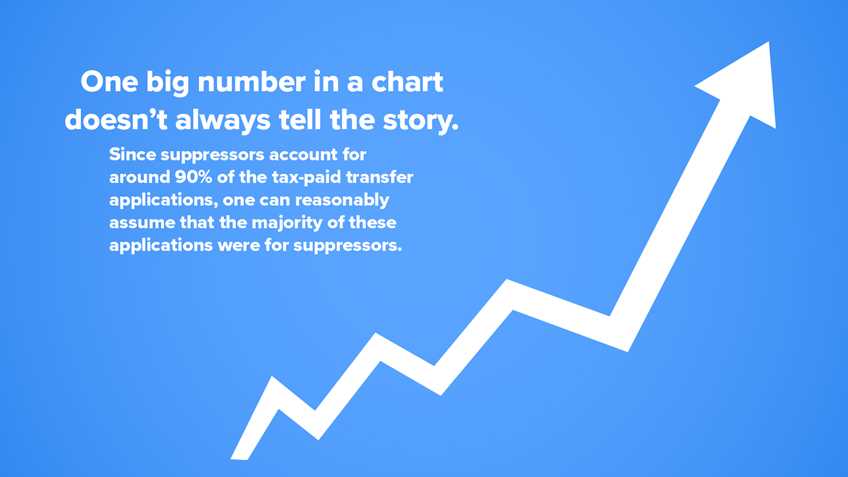 The number of Form 4 applications received by the Bureau of Alcohol, Tobacco, Firearms, and Explosives (BATFE) in 2016 and 2017 seems to indicate a clear peak followed by a marked drop-off. Nearly three times as many applications were received in 2016 as in 2017. Another indication of the Trump Slump or pre-Hillary Clinton panic buying?

About two years ago, BATFE issued Rule 41F Machine guns, Destructive Devices, and Certain Other Firearms; Background Checks for Responsible Persons of a Trust or Legal Entity with Respect to Making or Transferring a Firearm.

The ATF reports that the goal of this rule is “to ensure that the identification and background check requirements apply equally to individuals, trusts, and legal entities who apply to make or receive NFA firearms.” The rule became effective on July 13, 2016. Approximately two years’ worth of consumer purchases were compressed into the first six months of 2016 – pushing the total number of Form 4 NFA applications to 312,850 for the year. All but about 12% of these applications were submitted before Rule 41F came into effect. Since suppressors account for around 90% of the tax-paid transfer applications, one can reasonably assume that the majority of these applications were for suppressors.

Since suppressors account for around 90% of the tax-paid transfer applications, one can reasonably assume that the majority of these applications were for suppressors.

After the pre-rule rush, 2017 looked like a down year with “only” 110,377 Form 4 Applications received. This is actually in line with previous years before Rule 41F. By the end of 2017, there were nearly 1.4 million suppressors registered in the National Firearms Registration and Transfer Record – the database of all suppressors not owned by the federal government. The number of suppressors manufactured between the announcement of Rule 41F and April 2017 outpaced the number of Form 4 Applications; supply simply outpaced demand. The rest of 2017 saw four times as many Form 4 applications as suppressors manufactured as the market forces rebalance and BATFE catches up on processing the backlog of applications.

One big number in a chart doesn’t always tell the story.