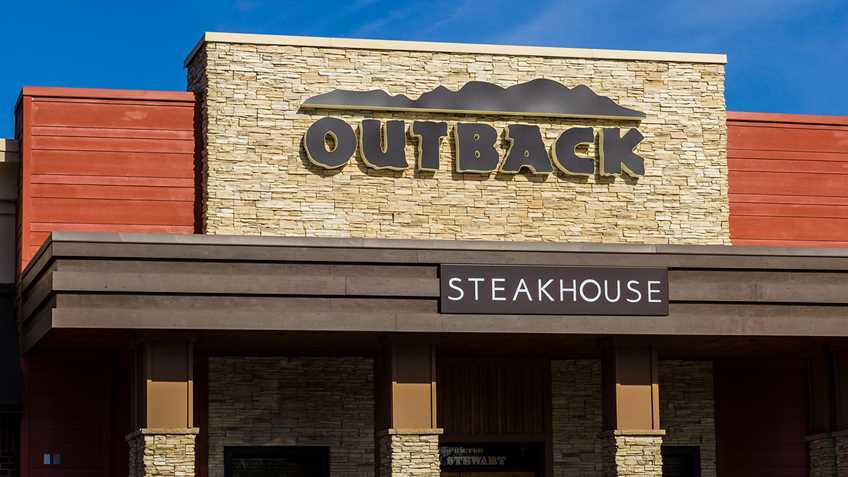 The word “Outback” used to conjure images of Australia’s tenacious frontier spirit; of hunters, ranchers, and other adventurers who carved out a harsh existence from an unforgiving land. Thanks to a decades-long campaign to distance the island nation from certain elements of its rugged heritage and the proliferation of an Australian-themed casual dining restaurant chain, today the word “Outback” is more likely to bring to mind a 3,000 calorie deep-fried onion.

Despite its namesake and decor, culinary critics have long questioned whether Outback Steakhouse offers an authentic Down Under dining experience. However, these detractors should know that in recent years the chain has gone to great lengths to replicate for their guests Australia’s culture of civilian disarmament by prohibiting diners from carrying firearms onto the premises. This commitment to reproducing Australia’s defenseless society is so profound that earlier this month a uniformed law enforcement officer was asked to leave an Outback in Cleveland, Tenn. because he was armed.

The incident occurred when Tennessee Wildlife Resource Agency Officer Andrew Ward and his wife went to the restaurant for dinner. In a Facebook post, Ward explained,

I was approached by the manager and asked if I would put my gun in my truck. I let her know that I couldn’t because I was in uniform. She then went and made a call and came back and we were asked to leave because Outback is a gun free zone.

What is this country coming to? A uniformed Law Enforcement Officer who is sworn to protect and serve the public, is refused service because they have a firearm! I am disgusted and have no other words!!!

In an update to his initial post, Ward noted that he was asked to leave after Outback management bent to the will of an unhinged customer. According to Ward, “There was another customer who was ‘scared for her life’… because ‘police are shooting people.’” Ward explained that “the customer went on to demand to be escorted to her vehicle out of fear of being shot.”

Given the decades of statistics showing the law-abiding character of Right-to-Carry permit holders, Outback’s gun free zone policy is foolish. However, that the company would cite their gun-free policy as justification to yield to the ravings of an unreasonable individual to the detriment of a uniformed law enforcement officer is radical.

There is a general consensus that uniformed and ununiformed current and former law enforcement officers should be allowed to carry a firearm for the public benefit. That is why in 2004 Congress passed and President George W. Bush signed the Law Enforcement Officer’s Safety Act (LEOSA). Under LEOSA, current and former law enforcement officers who meet certain basic criteria, such as carrying qualified identification, are permitted to carry a firearm throughout the country.

Showing the strong bipartisan support for this measure, the original legislation, H.R. 218, had 297 co-sponsors in the House of Representative and passed the Senate unanimously. Subsequent changes that have been made to increase the number of officers able to take advantage of this protection have been similarly popular.

Sensing a growing public outrage, Outback reached out to the Wards and offered them a $100 gift card and an apology. Outback’s parent-company, Bloomin’ Brands, Inc., issued a statement to Chattanooga’s WTVC that contended it is not company policy to prohibit law enforcement officers from carrying at their restaurants. The statement went on to blame the incident on the individual restaurant manager.

While the manager might have handled the situation better, Bloomin’ Brands shares some responsibility for creating the irrational gun free zone policy that the employee was forced to interpret. Outback Steakhouse ads have long carried the tagline “Outback: No Rules, Just Right.” In order to better reflect company values and bolster ongoing efforts at authenticity, we submit for consideration, “Outback: No Rights, Just Rules.”