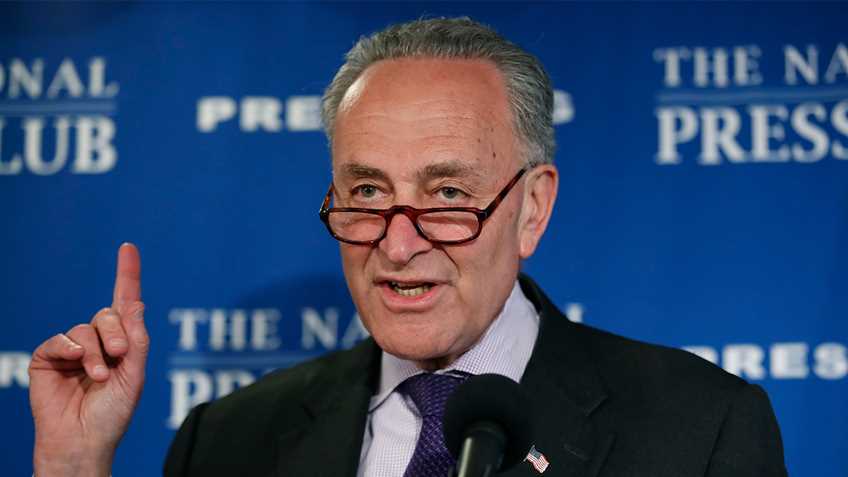 Sen. Chuck Schumer (D-NY), the current U.S. Senate minority leader has called for members of his party to filibuster the confirmation of Judge Neil M. Gorsuch to the U.S. Supreme Court.

Senate Majority Leader Mitch McConnell (R-KY) has predicted that Democrats will be unable to stop Judge Gorsuch’s confirmation. Speaking to reporters, McConnell said, “It’s almost amusing to watch our Democratic friends try to come up with some rationale for opposition.” McConnell also noted that no Supreme Court confirmation has ever been stopped by the sort of partisan filibuster Schumer is proposing.

Schumer, undoubtedly, knows all of that. And he knows the members of his party know it as well.

As one media account put it, “[T]here were several Democrats who appeared impressed with Gorsuch, who aced his confirmation hearing testimony. Committee Democrats couldn't lay a hand on him.”

But Schumer is so consumed by rancor and partisan politics that he insists on living in a state of abject denial. Forsaking reason (to say nothing of his oath of office), he is determined to use whatever authority and leverage he has for the sole purpose of obstructing the duly elected president of the United States.

Tellingly, few of the usual Trump-hating media outlets have rushed to Schumer’s defense or joined in his slander of a decent, honorable man.

Instead, the New York Times published an op-ed by a former Obama administration solicitor general praising Gorsuch for bringing a “sense of fairness and decency to the job, and a temperament that suits the nation’s highest court.”

Similarly, the Washington Post published an op-ed by a professor of jurisprudence at Princeton University who warned, “If Democrats are looking for a point of vulnerability in either Gorsuch’s integrity or impartiality, they won’t find it.”

And a columnist for the liberal Milwaukee Journal Sentinel called the idea of filibustering Judge Gorsuch’s confirmation vote “a petty charade.” That same piece observed, “During his hearing this week, Gorsuch proved himself to be an erudite family man with an encyclopedic knowledge of the law.”

And that’s about the worst that can honestly be said of him.

For Judge Gorsuch has distinguished himself in the academy, in the practice of law, and as a judge on the U.S. Court of Appeals for the Tenth Circuit.

Indeed, Schumer himself – along with then Sens. Barack Obama, Hillary Clinton, and Joe Biden, as well as current Senate minority whip, Dick Durbin (D-IL) – all voted in 2006 to confirm Neil Gorsuch to his current judicial post. That vote was unanimous.

Since that time, Judge Gorsuch has strengthened his reputation as a fair and impartial jurist.

Anti-gun Sen. Dianne Feinstein tried to argue during Judge Gorsuch’s recent Supreme Court confirmation hearings that he should have worked harder to bend the law in the direction of the “little guy.”

To this, Judge Gorsuch responded  how he has just as often been on the “little guy’s” side when the law actually favored the person’s claim. As he explained, the question in his mind was never who the litigants were but what law demanded as a result.

Speaking in his usual, measured tones, Schumer propounded from the Senate floor his rationalizations for filibustering Judge Gorsuch’s confirmation.

First, Schumer said, Judge Gorsuch hadn’t convinced him that he could be an “independent check” on President Trump. Schumer did not elaborate on this point, and it’s unlikely he could have, given the lack of evidence for his assertion and the mountain of evidence in Judge Gorsuch’s record that shows he simply follows whatever result the law requires.

Schumer also said Judge Gorsuch was “unable to convince me that he would be a mainstream justice” who would rule without bias. This ignored the opinions of Neil Gorsuch’s judicial colleagues, including a Bill Clinton appointee, who praised his professionalism and integrity. It’s also at odds with the Left-leaning American Bar Association, which gave Gorsuch its highest rating for a Supreme Court nominee.

Schumer’s final point was the same one that Gorsuch so ably debunked in his hearings, that he “almost instinctively favored the powerful over the weak.”

Yet the strain of his untenable position and the collapse of his dreams in the 2016 election are clearly weighing on Chuck Schumer.

News reports from this week indicate that Schumer experienced a very public and undignified meltdown when he encountered a Trump supporter at an upscale Manhattan restaurant and began screaming criticisms of Trump at her. The woman also happened to be the wife of a senior political appointee in two different Democratic presidential administrations.

Witnesses described Schumer as making “a scene,” “yelling,” and pursuing the woman outside the restaurant to continue berating her, even after she attempted to flee his tirade.

The victim, for her part, described Schumer as “rude” and said she was so taken aback at Schumer’s demeanor that “I didn’t say anything.”

Schumer’s camp denied her account, essentially calling her a liar.

So much for measured tones.

As we’ve long said, elections have consequences.  Sen. Schumer might not like that when he’s on the losing end, but it remains true.  Instead of trying to reverse the results of last November, Schumer should come to grips with reality and support Judge Gorsuch – a tremendously qualified nominee for the U.S. Supreme Court.