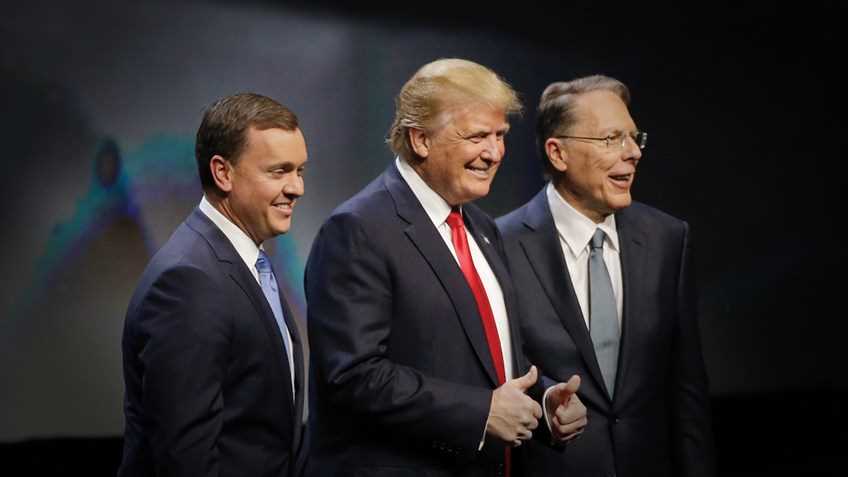 This feature appears in the January ‘17 issue of NRA America’s 1st Freedom, one of the official journals of the National Rifle Association.

November 6, 2012, was a difficult day. As I thought about what I could say in these pages as we contemplated another four years with Barack Obama as president and Joe Biden as vice president, I recalled the words of Alexis de Tocqueville, one of the keenest observers of American democracy. “The greatness of America lies,” de Tocqueville wrote, “in her ability to repair her faults.

So starting Nov. 7, 2012, that’s what your NRA set out to do: to continue the hard work of protecting our rights and to try to set the stage to repair the damage that eight years of an Obama administration would inflict.

We worked diligently during those years to limit our losses. History will reflect that not only did we succeed in fighting Obama to a standstill on his legislative agenda—which included banning America’s most popular rifles and criminalizing the transfer of firearms between relatives and friends—we helped ensure that the Supreme Court was not realigned against our rights. The efforts we began on Nov. 7, 2012, paid off in 2016 with the election of Trump as president of the United States.

Justice Antonin Scalia, author of the landmarkHeller opinion that recognized the individual right of armed self-defense under the Second Amendment, left us too soon on Feb. 13, 2016. His passing meant that the one-vote majority that supported this right no longer existed on the court.

All too predictably, Obama nominated a successor with anti-Second Amendment credentials, a judge who voted to give the District of Columbia’s unconstitutional gun ban a second chance when it was invalidated by a federal appellate court. His nominee also cast a vote to uphold a Clinton-era policy of documenting and registering law-abiding gun buyers, despite federal statutes passed specifically to prevent it.

The NRA helped lead the opposition against the confirmation of Judge Merrick Garland to the Supreme Court. Carefully and thoughtfully, we presented our case to the American people and to the U.S. Senate.

Throughout those many months—and, indeed, throughout the entire Obama presidency—we faced a withering barrage of false, misleading and negative attacks in the media. But through it all, and with our eyes firmly fixed on the monumental issues at stake, we did not blink. We stood our ground.

And so did the pro-gun Congress you elected to protect your rights.

As a result of the 2016 presidential election, Garland will not be confirmed to the Supreme Court to reverse the progress made in Heller. Instead, President-elect Donald J. Trump has promised to put forward a nominee who will uphold Scalia’s legacy of respecting the Second Amendment and its fundamental role in America’s constitutional order.

Not only does this mean our individual right to keep and bear arms will be preserved, it will hopefully mean that the high court will explicitly recognize that this right extends beyond the home. Time will tell, but the importance of NRA’s achievement in preserving a Supreme Court that takes the Second Amendment seriously cannot be overstated.

Despite these victories, we did suffer losses during the Obama years.

Obama pursued an aggressive course of executive action to curtail Second Amendment-protected rights. Tens of thousands of veterans were summarily stripped of their rights through the Department of Veterans Affairs, which labeled any beneficiary needing help with finances as a prohibited “mental defective.” Rulemaking is still pending to implement a similar regime with respect to a broad range of Social Security beneficiaries.

Untold thousands of rifles were subject to federal registration through an ATF program that forced southwestern FFLs to report certain sales directly to the government.

The U.N. Arms Trade Treaty was signed by Obama’s secretary of state, John Kerry, on behalf of the United States, signaling a willingness to place “international norms” ahead of America’s own Second Amendment.

Federal banking regulators created an atmosphere of toxicity around firearm-related businesses in the financial services industry. Many upstanding gun shops were choked off from the credit their small businesses needed to survive.

And statutes that had been on the books for years were suddenly reinterpreted to expand the reach of the federal government into innocent firearm-related activity. Casual gun sales between friends could trigger federal dealer licensing requirements. Traditional gunsmithing could trigger a prohibitively expensive State Department registration requirement for “manufacturers” of “defense articles.” Technical discussions and depictions of firearms and ammunition posted online could trigger federal “export” controls, with felony penalties and ruinous fines for those who fail to comply.

The efforts we began on Nov. 7, 2012, paid off in 2016 with the election of Trump as president of the United States. In addition, America preserved pro-gun majorities in the U.S. House and Senate and a substantial pro-gun majority in governors’ offices throughout the country. It is now time to repair the damage brought on by eight years of the Obama administration and to embrace the opportunities that await us.

Those results sent shockwaves throughout the political establishment.

Let’s face it, virtually every facet of America’s political, cultural and academic elite got it wrong.

But your NRA got it right. We were among the first to throw our full public support behind Trump. And we stuck to our guns through one of the most bitterly and hotly contested elections in our nation’s history. Because you don’t abandon your mission or principles—or your friends—when the going gets tough or things get ugly. Mission, principles and friends see you through tough times.

I am proud of our support for Trump. More so than any candidate in the modern era, he stood up for the voices that have been ignored, if not silenced, in American politics: for tradesmen, for cops, for America’s military members, for all the ordinary, hardworking people who liberal elites were willing to dismiss as “deplorable” and “irredeemable.” He brought passion, understanding, and guts to an American political landscape that needs more of it. And he was outspoken in his support for America’s law-abiding gun owners.

And you got it right as well. For nothing the NRA does can succeed without you, the American gun owner and voter. With quiet determination, goodwill, tireless energy and belief in the greatness of America and its founding principles, you upended the Washington establishment and set the stage for a course correction that can result in a freer, more prosperous and safer America.

It is now time to repair the damage brought on by eight years of the Obama administration and to embrace the opportunities that await us.

We have every reason to believe that Trump will work with us to protect and promote the Second Amendment.

He has promised to nominate a replacement for Scalia who will carry forward the legacy of respect for and understanding of the Second Amendment. This will secure our fundamental right to keep and bear arms for generations to come.

He has committed to reversing the harmful effects of Obama’s anti-gun executive actions. This will ensure the federal bureaucracy is not used as a club against law-abiding gun owners and firearm-related businesses.

Perhaps most importantly, NRA-ILA will be better situated than at any time in its 41 year history to advance a pro-gun legislative agenda through Congress and promote laws to materially benefit American gun owners.

One of our first objectives will be a comprehensive interstate concealed-carry reciprocity law. Gun owners lawfully carrying firearms for defensive purposes should no longer have to fear becoming accidental felons when they cross state lines.

We’ll also make sure our veterans are protected and won’t have to fear that taking advantage of the benefits they earned by their service will cost them the very rights they served to protect.

Finally, we will work to modernize the Gun Control Act of 1968 to ensure that it does not provide a barrier for today’s firearm-related commerce and that responsible businesses are not unreasonably burdened by an unnecessary or intrusive bureaucracy.

As always, we will need your help and support as we move forward. And as always, you can count on your NRA to never relent in the protection and promotion of our rights.

California: Tomorrow, December 28th Is the Last Day to Submit Comments on the Proposed Magazine Regulations