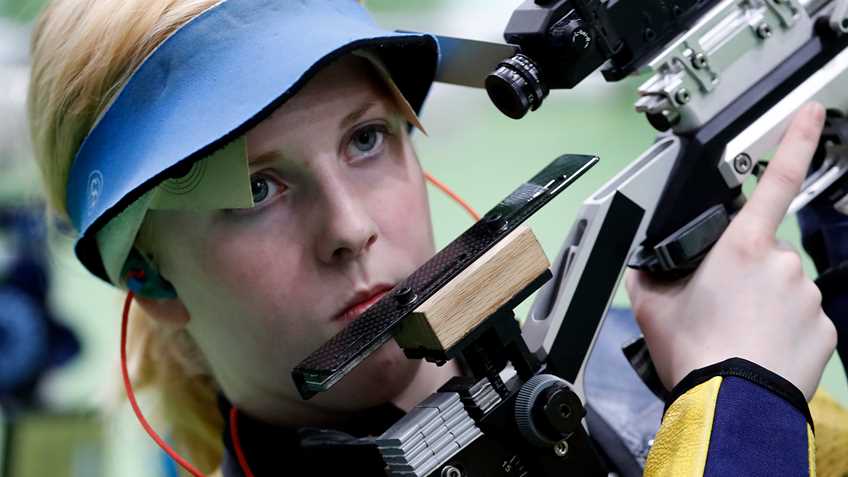 Signs of the cultural schisms and declining love of country that are the chief legacy of the Obama presidency are all around us. And while not the most serious, one of the most unfortunate and pathetic is that Americans can no longer agree that a fellow patriot’s gold medal at the Olympics is something to be celebrated. At least not when the gold involves pulling a trigger.

Nineteen-year-old Virginian Ginny Thrasher became the first gold medalist of the 2016 Summer Olympiad last Saturday, winning the women’s 10-meter air rifle competition in an upset over heavily-favored China, whose competitors in the event have six prior Olympic medals between them.

Ginny’s is a classic Cinderella story of a young athlete ascending to the top of her sport in her very first Olympic appearance. And while her stiffest competition have long been dominating international matches, Ginny’s first exposure to the shooting sports occurred only few years ago, on a hunting trip with her grandfather. Taking her first whitetail proved to be a formative experience for Ginny, as the then-figure skater began devoting her full competitive energies to marksmanship.

Fortunately, in addition to her grandfather, she had support and training from her father, who is retired from the U.S. Air Force. She also had ready access to firearm safety training and scholastic shooting programs at two public institutions, West Springfield High School and perennial NCAA shooting standout West Virginia University. During her freshman year last season at WVU, Ginny won the individual small-bore and air rifle titles, paving her way to national prominence and a place on the U.S. shooting team.

Ginny’s story could only be written in America, where firearms are woven into the fabric of ordinary life and where even a suburban teenage girl can find top notch marksmanship training and support right in her own neighborhood.

“I am so proud of being American,” she told ABC News. “I am so proud to stand on that podium, to listen to my nation’s anthem and to just be able to represent, and start off this Rio 2016 games on such a positive note.”

Now it’s no surprise that the chattering classes from abroad haven’t been as enthusiastic in embracing Ginny as the vast majority of Americans. Gun-hating Piers Morgan, a sterling example of why the British Empire has declined so precipitously, weighed in early with his mockery. “LEAST SURPRISING BREAKING NEWS EVER,” he tweeted, “America's 1st Olympic Gold Medal is for Shooting. #Thrasher.”

But it’s disappointing that antigun politics prevent even some Americans from celebrating their countrywoman’s outstanding accomplishment. Wil Wheaton (yes, we checked, and apparently he’s a celebrity of sorts), reacted to Ginny’s win with this tweet: “America's first gold medal in the 2016 Olympics was won by a teenager for shooting. Because we now live inside @TheOnion.”

The Twittersphere featured a number of similar comments, albeit many by people who have no public persona or whose public persona is even more obscure than Wil Wheaton’s.

And the Washington Post, in an otherwise relatively straightforward profile of the golden girl, nevertheless could not help commenting on her “menacing name” and “high-powered, German-made weapon.”

In that regard, the Post was wrong on everything except the origin of Ginny’s Feinwerkbau 700. While it was made in Germany, it’s basically a more sophisticated version of the pellet guns many American children grow up with and use to learn the fundamentals of safe shooting and gun handling. It is designed specifically for marksmanship competitions, not as a weapon. And propelling a .177 caliber pellet at a maximum velocity of 570 feet per second, it’s not even especially powerful by air gun standards. What distinguishes it most is its pinpoint accuracy at competition range, something that only really matters in the hands of an expert user like Ginny Thrasher.

Simply put, any suggestion that Ginny’s participation in elite shooting competition on behalf of her university and country somehow promotes a “culture of violence” or firearm-related crime is like suggesting that the Olympic torch should be faulted for contributing to global warming.

Indeed, a variety of shooting sports have a long-established history in the Olympic Games. And for good reason. Many traditional Olympic events are rooted in disciplines that have a martial pedigree, including biathlon, wrestling, boxing, archery, javelin, and equestrian events. Yet according to the International Olympic Committee’s charter:  “The goal of Olympism is to place sport at the service of the harmonious development of humankind, with a view to promoting a peaceful society concerned with the preservation of human dignity.” In other words, the Olympics provide a forum for countries to contend with one another in contests of strength, courage, precision, speed, and skill, but without bloodshed and with the goal of mutual elevation, not conquest or subjugation.

That’s a pretty intuitive concept for most people to grasp.

As for Ginny, she’s not letting ginned up “controversies” interfere with the achievement of her Olympic dreams. You don’t become Olympic shooting champion, after all, if you are easily distracted. Rather than focus on polemics, Ginny said, “I just tried to focus on the competition.”

That’s what makes Ginny an international winner and an American success story.

And while most Americans will continue to embrace her as a hero, her detractors on Twitter will no doubt keep making fools of themselves, 140 characters at a time.