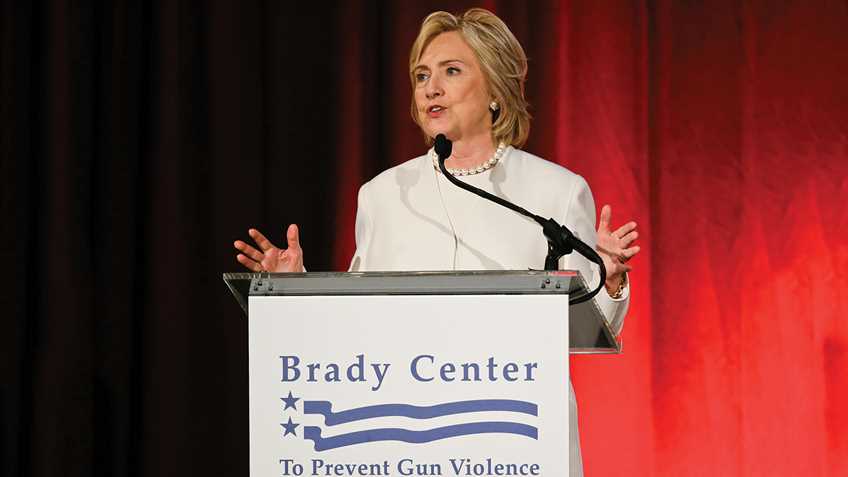 You can judge a presidential candidate by the company she keeps. Over the last week, Democrat Hillary Clinton received endorsements from the Brady Campaign to Prevent Gun Violence, Americans for Responsible Solutions, and former Attorney General Eric Holder. All are in lock step with the gun control agenda President Obama has pursued during his second term of office, and the plan Clinton has laid out in her gun control campaign platform.

The Brady Campaign said Clinton “will finish the job” begun by Obama, to impose mandatory background checks on non-dealer sales, trades, and gifts of firearms. Former Rep. Gabrielle Giffords and husband Mark Kelly, said Clinton is the only “candidate for president that has the determination and toughness to stand up to the corporate gun lobby.” Holder said Clinton, “has bold plans to address police brutality [and] fight for common sense reforms to our gun laws.”

The endorsements should help Clinton establish herself as the most anti-gun candidate running for president this year, a tactic she hopes will increase her declining support among Democrats in Iowa and New Hampshire.  As the Washington Post observes, “polls [have] suddenly showed the Democratic presidential front-runner in real danger of losing the first two primary contests.” Sen. Bernie Sanders of Vermont has overtaken her in both states.

Apart from the endorsements, Clinton has been busy trying to shore up her support among the Democrat base. On Tuesday during a campaign stop, Clinton was introduced by Brady Campaign president Dan Gross, who said, “She’s taking on the corporate gun lobby, and she’s taking it to them like no presidential candidate ever has.” Clinton followed, saying, “Anybody who cares about . . . making a difference . . . has to stand with us against the gun lobby. That is an absolute must.” Perhaps tired from the rigors of the campaign, she forgot to say “corporate” gun lobby, phraseology that gun control supporters have started using to play to the anti-capitalism rhetoric of Sen. Sanders.

Clinton remembered to throw a sop to anti-capitalist voters in a new campaign video, however. In the video, Clinton says she’s “with” Obama when it comes to not only so-called “universal” background check legislation, but also to repealing the Protection of Lawful Commerce in Arms Act (PLCAA). Gun control supporters hate that law, because it prohibits them from filing ruinous lawsuits against lawful firearm manufacturers and dealers for the criminal misuse of their products.

Increasing gun control supporters’ sense of urgency to repeal the PLCAA is the fact that firearm sales are soaring and, along with it, the publicly traded stock values of Ruger and Smith & Wesson.

It’s far too early to know whether Clinton will end up her party’s nominee. But if she does, she will have made sure that everyone in America knows she is the most openly anti-gun presidential candidate in America history.