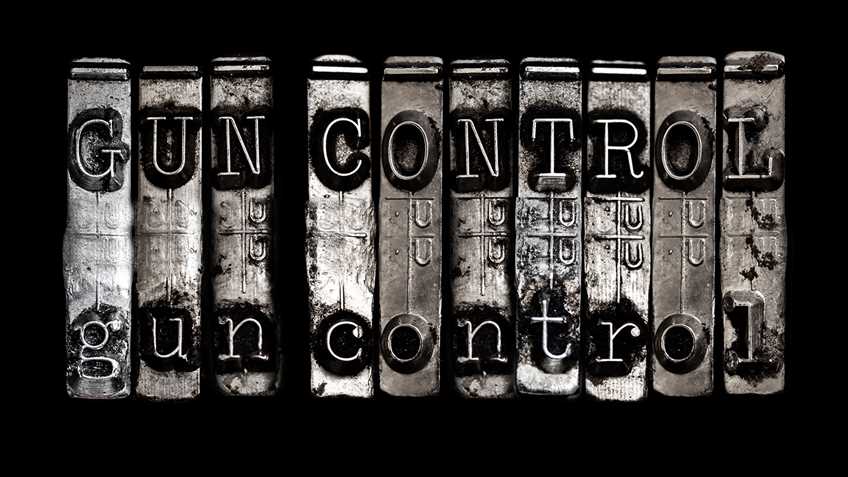 Throwing all manner of mud at the wall to see what might stick, Michael Bloomberg’s number-crunchers and whoever produces “reports” for the Brady Campaign nowadays have decided, as gun control supporters do, to try promoting gun control as the solution to suicide.

From their perspective, it makes sense to give it a try, since firearm murder and firearm accident death rates are at historic lows, the American people increasingly say that firearms help protect people from crime, and each of the anti-gunners’ attempts to promote gun control in knee-jerk reaction to high-profile crimes has motivated Americans to buy more guns.

A new study by researchers at Bloomberg’s Center for Gun Policy at Johns Hopkins University contends that if you juggle the numbers a certain way, suicide rates might hinge on whether a state requires a permit to purchase a handgun, while the Brady Campaign tries to link suicide rates to gun availability in general.

Dealing with the subject of suicide requires the anti-gunners to get creative, however. According to Centers for Disease Control and Prevention (CDC) data, which cover years 1981 through 2013—incidentally, a period in which Americans acquired an additional 195 million firearms—the firearm suicide rate (the number of suicides per 100,000 population) decreased five percent, while the non-firearm suicide rate increased 27 percent. 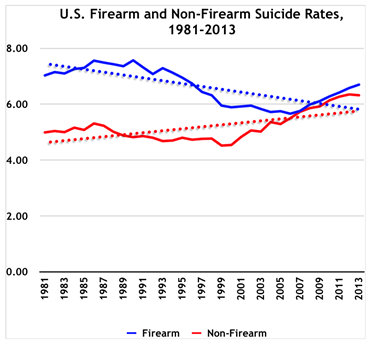 Requiring that a person obtain a permit before acquiring a handgun is one of anti-gun activists’ favorite restrictions, particularly if the authorities that control the permits are allowed to arbitrarily refuse them to legally eligible applicants. The Brady Campaign calls the concept “needs-based licensing,” with the understanding that if you aren’t in the FBI’s witness protection program, or a real life James Bond, or married to someone in the issuing officer’s immediate family, you couldn’t possibly need to have your application approved.

So, Bloomberg’s researchers compared suicide trends before and after Connecticut increased its purchase permit requirement in 1995, and before and after Missouri eliminated its requirement in 2007. The researchers ran the numbers, for those states and the other 48, two ways. When using a “synthetic” model – which is not the preferred approach when studying differences among the states  – the researchers not surprisingly concluded that purchase permit laws reduce suicide.  Synthetic, in this case and as you might expect, means created from computer simulation.

However, when they ran the numbers according to traditional methodology based on actual data from the states, they admitted, Connecticut’s permit law had “no association with overall suicide rates” and “[t]he repeal of Missouri’s [purchase permit] law was not associated with changes in any of the suicide measures.”

Of course, instead of leading with this finding, the researchers used the “synthetic” model as the lead because it provided the results which support their anti-gun agenda.

As the trend lines in the following chart show, over time, Connecticut’s suicide rate has remained almost flat, the U.S. rate has decreased slightly, and Missouri’s rate has increased only slightly. 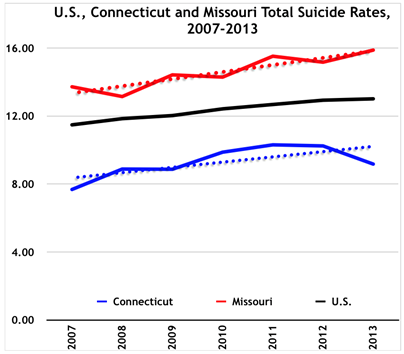 Gun control supporters might say “ah HA!” to Missouri’s increase over the last few years. However, as the trend lines in the next chart show, since about the time of the 2008 recession and stock market decline, Connecticut’s suicide rate with a purchase permit restriction, and Missouri’s rate without such a restriction, have both increased, along with that of the rest of the United States.

As the New York Times reported in 2013, after interviewing officials at the CDC, the increase may be traced to “the economic downturn over the past decade. Historically, suicide rates rise during times of financial stress and economic setbacks.”

The Times further noted, “[a]nother factor may be the widespread availability of opioid drugs like OxyContin and oxycodone, which can be particularly deadly in large doses.” Indeed, for all of gun control supporters’ focus on guns, most of the recent increase in non-firearm suicides has been due to an increase in those by suffocation and by drug-related poisoning. 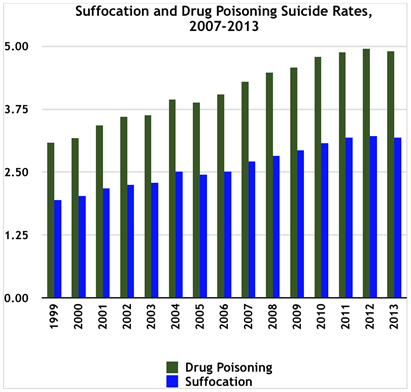 Dr. Crifasi also admitted that her study’s findings didn’t show that the lack of a handgun purchase permit requirement increases suicides. “When we examined whether there were changes in suicides committed by other means following the changes in the laws, there was some evidence that Connecticut experienced lower than expected rates of suicides by means other than firearms,” she said. “This suggests that factors other than handgun purchaser licensing may have contributed to the decline in suicides.”

The Brady Campaign may be wrong about how to remain safe. But we can at least give them credit for reminding us of the value of unsolicited advice. 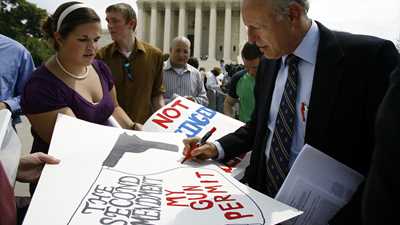