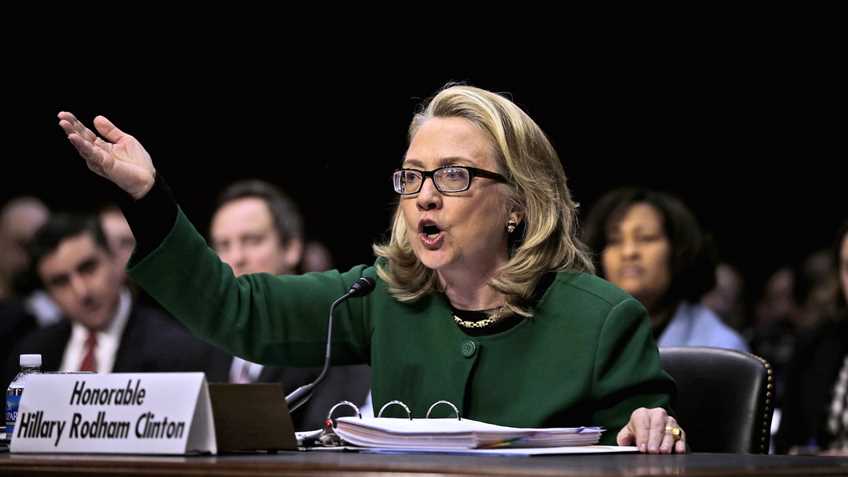 To divide, divert and confuse defenders, fighter pilots flying sorties commonly take off from multiple airfields, then proceed along sinuous, seemingly unconnected routes, making carefully timed turns and following a precisely choreographed three-dimensional vector plan that allows them to converge—like the sun’s rays through a magnifying glass—over their target at the final instant, with devastating results.

Now that Hillary Rodham Clinton has formally declared her intention to assume the office of president of the United States, you can bet she’ll calculate, triangulate and endlessly re-vector her position on your right to keep and bear arms in much the same way—just as she’s done for years.

Before anyone believes Hillary’s promises and proclamations—that she supports the Second Amendment, that she grew up shooting, that she hunts ducks (with a rifle, no less!) or that she doesn’t want to take anyone’s guns away—everyone who values their right to keep and bear arms should be warned:

Hillary can claim to support the Second Amendment. She can parade around with her 24/7 Secret Service security and pretend to care about the freedom and safety that the Second Amendment alone guarantees to our families. And she can pose as just an ordinary, down-home, Arkansas duck-shootin’, Cope’-dippin’ good ol’ gal.

But if you look beyond the tortuous and snaky convolutions her statements to various audiences have undergone over the years, you’ll see Clinton’s votes, positions and political platforms all lead to the same conclusion.

For proof, just look at a few of Clinton’s statements, positions and votes over the years.

In 1999, in remarks to the National Education Association, Clinton said, “It does not make sense for us at this point in our history to turn our backs on the reality that there are too many guns ...”

Not “too many criminals.” Not “too few prosecutions.” Just “too many guns.”

So: What does she plan to do about “too many guns”? Ban them, of course. As Clinton vowed in a Democratic primary debate in 2008, “I will also work to reinstate the assault weapons ban”—a position she reiterated as recently as last year.

Where she can’t flat-out ban firearms, she’ll do her best to reduce their availability and further limit who can own them. As Clinton wrote in her book “Living History” in 2003, “Bill and I announced a proposal to raise the legal age of handgun ownership to 21, and limit purchases of handguns to one per month.”

Beyond bans and limits on firearms, Clinton is happy to wage cultural war on the Second Amendment, much in the spirit of her husband’s deputy attorney general, Eric Holder, whocalled for brainwashing American youth against guns. As Hillary Clinton told a group of New York school students in 1999, “It is really important for each of you [kids] to make sure you stay away from guns. If you have guns in your home, tell your parents to keep them away from you ...”

If Clinton plans to ban semi-automatic firearms, as her husband did and as she has repeatedly proclaimed, how would she find them in order to confiscate them?

Simple—through the intrusive tool of a national gun registration scheme, in which every gun owner would be licensed and every firearm would be registered in a federal computer database searchable by name, address, firearm and serial number.

That’s why federal gun registration has been specifically outlawed by federal law for decades. And it’s why gun registration has been considered the holy grail—the queen on the chessboard and the key to the kingdom—by every gun-ban group, every genocidal regime and every would-be tyrant around the world since King George sent his redcoats to seize the colonists’ arms at Lexington and Concord. That’s not hyperbole. It’s history.

So it’s no surprise that Hillary Clinton is on record favoring gun registration and owner licensing since before her husband left the White House.So despite the serpentine twists and turns of her admitted agenda over the years, Hillary Clinton’s apparent ultimate aim is as direct and undeviating as an argon laser.

In June 2000, after U.S. Senator Charles Schumer, D-N.Y., sponsored legislation requiring anyone seeking to purchase a gun to obtain a state-issued photo gun license, Clinton said, “I stand in support of this common-sense legislation to license everyone who wishes to purchase a gun.” Going beyond even that, Clinton added, “I also believe that every new handgun sale or transfer should be registered in a national registry.”

Now Clinton’s public position has taken another of its many snaking twists and turns. She’s backed off from admitting she supports national gun registration—but her agenda unswervingly leads to that same endgame.

Now Clinton proclaims her support for the focus group-tested, “new and improved” anti-gun scheme of “universal” background checks. But as even Barack Obama’s own Justice Department has admitted, the effectiveness of “universal” checks depends on “requiring gun registration.”

So despite the serpentine twists and turns of her admitted agenda over the years, Hillary Clinton’s apparent ultimate aim is as direct and undeviating as an argon laser:

“Universal” background checks ... which depend on universal gun registration ... which inevitably, invariably, leads to gun confiscation.