If a picture is worth a thousand words, you should be skeptical about what this picture from "Moms Demand Action" has to say.

The photo, the caption for which claims that it shows "hundreds" of anti-gun protesters, was taken a half-mile or so from the NRA Annual Meeting in Nashville over the weekend.

However, so was this photo, which shows that there were only about 100 protesters. And that includes the unfortunate children of some anti-gun adults who selfishly dragged them along for show. 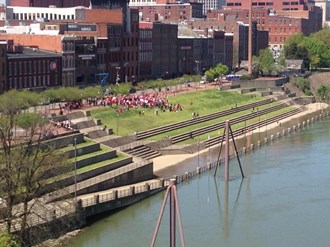 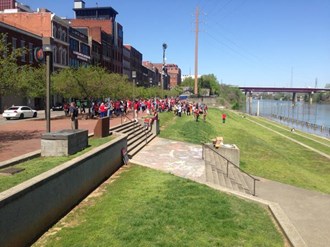 What gives? Well, just as the Wizard of Oz had his Toto, the little anti-gun group’s deception has been exposed by an eagle-eyed observer on gunfreezone.net. As he explains, the anti-gunners exaggerated the size of their piddly protest by staging their photo with one handful of them standing on higher ground, well behind the other handful, trying to conceal the optical illusion-inducing gap separating the two. Other photos posted by The Blaze further show how few people turned out to protest for gun control.

A normal person might wonder why the anti-gunners went of their way, trying to make people think there were 400 protesters—the number they had predicted they would attract—when there were only about 100. After all, either number pales in comparison to the nearly 80,000 Americans who attended the NRA convention. But anti-gunners are so in the habit of lying, they can’t help but to do so, even when there is nothing particular to be gained.

No matter. The numbers speak for themselves. Last weekend, Nashville was NRA, and NRA was Nashville. The anti-gunners were noticed only because they called attention to themselves in disgrace.

You Can't Get There from Here: Obama Administration Shrugs Off Woes of International Travelers