New Lawmakers Inform President of their Opposition to the U.N. Arms Trade Treaty 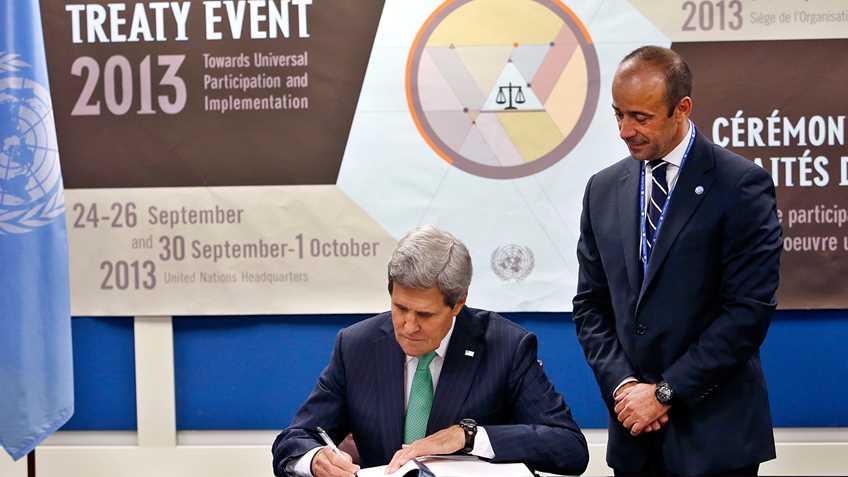 On Monday, a group of 12 freshman Senators expressed their opposition to ratification of the United Nations Arms Trade Treaty in a letter to President Barack Obama.  Secretary of State John Kerry signed the UN ATT on behalf of the U.S. on September 25, 2013. In their letter, the new Senators cited an October 15, 2013 letter to the president signed by 50 Senators from the 113th Congress that outlined their concerns regarding the treaty in detail. Further the group wrote, “we pledge to oppose the ratification of this treaty, and we give notice that we do not regard the U.S. as bound to uphold its object and purpose.” Altogether, 55 Senators in the 114th Congress have made clear that they oppose the UN ATT.

The freshman Senators were led in their effort by two veteran opponents of the treaty, Senators Jim Inhofe (R-Okla.) and Jerry Moran (R-Kans.). In joint press releases Tuesday, the pair further explained why staunch Senate opposition to the ATT is vital to American gun owners.

Senator Moran noted, “Throughout this process, it has been disturbing to watch the Administration reverse U.S. policies, abandon its own ‘red line’ negotiation principles, admit publicly the treaty’s dangerous ambiguity, and hastily review the final treaty text.” Senator Inhofe made clear that “the president continues to mislead the U.N. by keeping the United States as a signatory nation of a treaty the Senate will not ratify. As threats to our security and that of our allies continue to grow, serious questions surround the treaty regarding its implementation and its effect on our ability to aid and arm our allies, and raises serious concerns regarding our Second Amendment rights.”

In a portion of the release summarizing the six broad reasons for opposing the ATT given in the 2013 letter, the Senators Inhofe and Moran listed as one of their concerns: “The treaty includes only a weak non-binding reference to the lawful ownership, use of, and trade in firearms, and recognizes none of these activities, much less individual self-defense, as fundamental individual rights. This poses a threat to the Second Amendment.” This embodies much of the reason NRA’s opposes the treaty and has worked to limit its potential effect on American gun owners since the push for the ATT began in 2003.

In an analogous move, 34 new members of the U.S. House of Representatives sent a letter to the president adding their names to the list of House lawmakers that oppose the treaty. The effort was led by longtime ATT opponent Representative Mike Kelly (R-Pa.). The House letter makes clear that language in the treaty “implies that treaty supporters seek to use it to impinge on the lawful ownership, use of, and trade in firearms.” Further, the letter explains, “we oppose the passage of implementing legislation that is necessary for [the treaty] to have any domestic effect. Lastly, as members of the House of Representatives, which is particularly invested with the power of the purse, we oppose the use of any funds to implement the Arms Trade Treaty.”

Considering the president’s recent abuse of executive authority in other gun control efforts, the staunch Congressional opposition to the ATT exhibited in Monday’s letters is more important than ever. In recent months the president has shown a willingness to act unilaterally on a number of policy fronts, most notably for gun owners, a proposed ban on popular rifle ammunition. Such strong opposition in the Senate helps to ensure that the treaty will never be formally ratified. However, Congressional opposition is also needed to combat any attempts by the president to unilaterally enact policies that he believes would help the U.S. better conform to the treaty.