Polls Find Broad Increase in Support for the RKBA 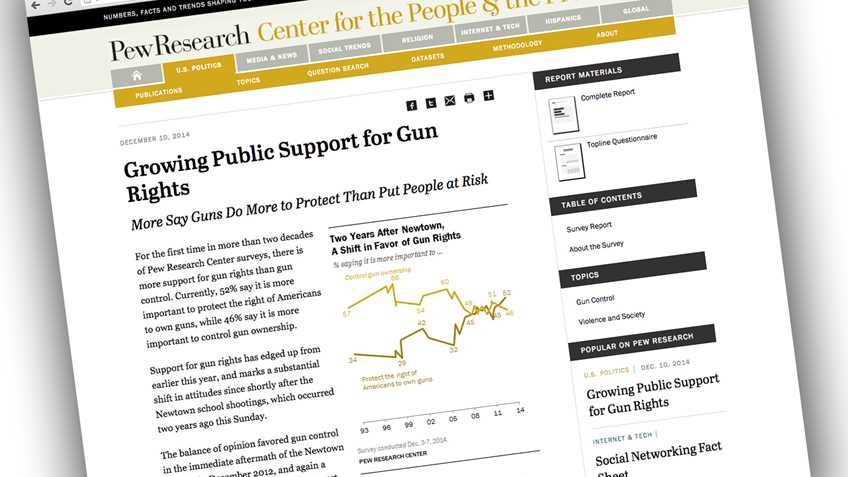 Support for the right to keep and bear arms has sharply increased, and support for restricting gun ownership has sharply decreased, over the last two years, according to the results of a new poll by the Pew Research Center for the People and the Press.

The poll, conducted earlier this month, found that 57 percent of Americans believe that gun ownership does more to protect people from crime, while only 38 percent believe guns do more to put people at risk.

Viewed in conjunction with Pew’s previous polls on the same topic, the percentage of Americans who believe that gun ownership protects people from crime has risen by nine points during the last two years, a period during which President Obama, Michael Bloomberg and other gun control supporters have campaigned hard for restrictions on guns. By comparison, the percentage believing gun ownership puts people at risk has risen only one percent.

Perhaps the most shocking of the polls’ findings, for gun control supporters who have convinced themselves that time is on their side, support for gun ownership rights increased eight points, while support for restricting gun ownership decreased seven points, among persons ages 18-29.

Asked by the Washington Times to comment on the polls’ findings, Ladd Everitt, of the Coalition to Stop Gun Violence (formerly the National Coalition to Ban Handguns), said the wording of the survey might have influenced the results.

Sorry, Ladd. Americans of nearly every description are embracing the Second Amendment at historic levels, even as its opponents pour historic amounts of money and effort into suppressing it. These results support what we’ve said many times before: American freedom is not for sale.