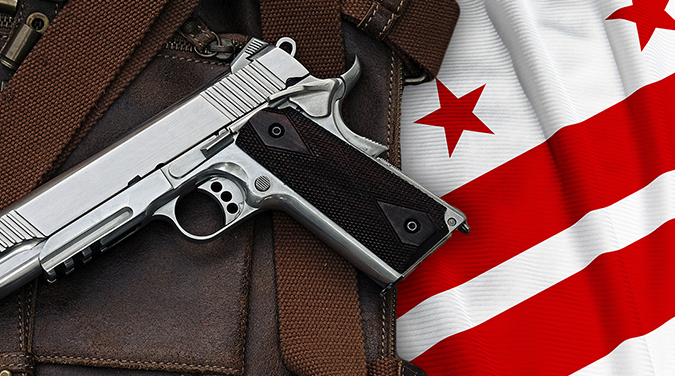 On July 26, the United States District Court for the District of Columbia handed down its decision in Palmer v. District of Columbia. In keeping with a string of recent right to carry victories in the federal courts, the ruling struck down D.C.’s total ban on the carrying of firearms outside the home for self-defense.

Judge Frederick J. Scullin authored the opinion, in which he conducted a two-step analysis to determine the validity of the laws in question. First, he examined whether the Second Amendment right encompasses carrying outside the home. After answering the first question in the affirmative, he then turned to the matter of whether the challenged laws impermissibly violate that right.

In the opinion, Scullin relied heavily upon the Heller and Peruta decisions in finding that the scope of the Second Amendment right extends beyond the home. He quoted from a section of Peruta, which states, “both Heller and McDonald identi[ied] the ‘core component’ of the right as self-defense, which necessarily ‘take[s] place wherever [a] person happens to be,’ whether in a back alley or on the back deck.” Scullin added: “Based on its historical review, the Court found support for the proposition that the Second Amendment secures an individual right to carry in case of confrontation [which] means nothing if not the general right to carry a common weapon outside the home for self-defense.”

In determining whether D.C.’s carry ban violates the Second Amendment right, Scullin relied on Moore v. Madigan, which stated, “[a] blanket prohibition on carrying gun[s] in public prevents a person from defending himself anywhere except inside his home; and so substantial a curtailment of the right of armed self-defense requires greater showing of justification than merely that the public might benefit on balance from such a curtailment, though there is no proof that it would.” In concluding his analysis, Scullin added, “In light of Heller, McDonald and their progeny, there is no longer any basis on which this Court can conclude that the District of Columbia’s total ban on the public carrying of ready-to-use handguns outside the home is constitutional under any level of scrutiny.”

For a brief period, D.C.’s Metropolitan Police Department, acting on the advice of the D.C. Attorney General’s Office, had suspended enforcement of the laws enjoined by the court’s opinion. Pictures emerged of individuals who took advantage of this historic opportunity to exercise their right publicly to carry handguns in D.C.

By Tuesday, July 29, however, the court had issued an order staying the effect of its decision for 90 days to allow D.C. to revisit its laws and to allow the plaintiffs to file arguments against a longer stay pending appeal. The court’s order effectively reinstated the status quo that existed before its ruling, meaning that D.C.’s laws against carrying firearms in public could continue to be enforced.

On August 18, D.C. officials requested additional time to react to the decision, asking the court to “grant a stay pending appeal here or, in the alternative, for 180 days … for District officials to craft responsive legislation.”  The court granted a more limited stay and then on October 18 rejected the District’s motion to reconsider the case.

The District nevertheless has continued to drag its feet and has grudgingly enacted a highly-restrictive “may-issue” concealed carry licensing regime.  That system is only temporary, but the D.C. Council is already moving to enact a more permanent (and equally strict) law. Among other things, the District requires that applicants show an employment-based need to carry or “a special need for self-protection distinguishable from the general community ….” In response, the plaintiffs in the case have asked the court to enjoin any further enforcement of the ban on carrying a handgun because the “may-issue” system enacted by the council is inconsistent with the court’s prior holding that the Second Amendment protects a general right to carry firearms outside the home for self-defense.

All the while, the District has continued to insist that the court erred in finding that the Second Amendment protects a right to carry a firearm in public for self-defense, or if any such right exists, that the District has sufficient justification for its infringement. In the latter regard, the District emphasizes what it calls D.C.’s unique character as the seat of the nation’s government.

Media reports as of late October indicated that D.C. officials would appeal Judge Scullin’s ruling. If that proves to be true, the jurisdiction that prompted the Supreme Court to recognize the Second Amendment’s individual right might just set the stage for the high court to rule favorably again on the scope of that right. Gun controllers are slow learners, but their stubbornness has been instrumental in moving the Second Amendment needle in the right direction.