New numbers reported by the FBI suggest that Americans may be buying firearms at a slightly higher rate in 2014 than they did in 2012, following a record number of checks during the “surge” brought on by President Barack Obama’s re-election in November 2012 and his subsequent campaign for gun control.

Because Americans bought guns at an unusually high rate in 2013, some commentators have compared the 2013 numbers to those in 2014 and on that basis claimed that gun purchases are in serious decline.  However, that’s like saying that a professional football team’s offense is waning, because after racking up 30 points in the first quarter and 40 points in the second quarter, it has scored only 24 points in the first eleven minutes of the third quarter.

Thus far in 2014, there have been 8.33 million checks for the purchase of firearms, compared to 8.29 million for the same period in 2012, and smaller numbers in previous years.  These figures don’t include checks conducted for the purposes of purchase or carry permits, or several relatively uncommon categories of checks, nor do they indicate how many firearms were transferred as a result of the checks.  NICS check numbers don’t indicate gun sales as accurately as firearm manufacturing and import statistics, but they are more up-to-date in general and they are updated on a monthly basis. 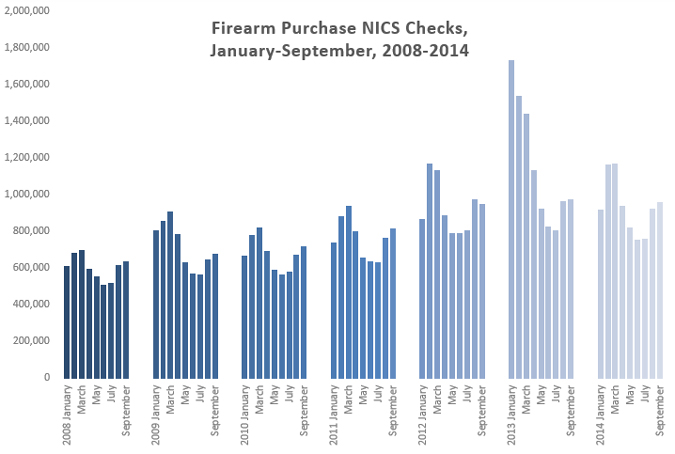