Mark Kelly Lies About Gun Sales Before I-594 Vote 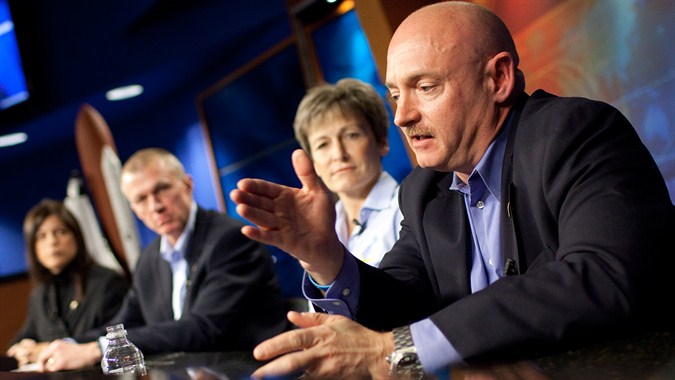 On Tuesday, five weeks before voters in Washington State will decide whether to require “universal” background checks on firearm transfers, gun control advocate Mark Kelly lied on national television about how many such transactions occur without a background check.  Asked by CNN, Kelly said (at 3:30 in the video), “right now 60 percent of all gun sales go--occur--with a background check.  Why do we allow the 40 percent, the other 40 percent, to happen?”

Kelly and his wife, former Congresswoman Gabrielle Giffords, are the co-founders of the gun control group, Americans for Responsible Solutions.  On their group’s website, they make the “40 percent” claim in its most common form, saying “up to 40 percent of all gun transfers . . . take place without a background check.”

However they choose to word it, the claim is false, and even the media have been saying so for more than two years.  In July 2012, the Tampa Bay Times faulted Michael Bloomberg for claiming “There’s a loophole where you can sell guns without a background check at a gun show.  Forty percent of guns are sold that way, same thing on the internet.”

Bloomberg said that the “40 percent” figure came from a study co-authored by gun control supporter Philip Cook in 1997 (a year before the national instant check system became operational).  However, Times’ PolitiFact reporters Jon Greenberg and Molly Moorhead asked Cook if he considered the “40 percent” figure to be a reliable estimate of secondary market gun sales currently.  Cook’s response, as Greenberg and Moorhead reported, was “I have no idea. This survey was done almost 20 years ago.”

Unfortunately, anti-gun activists are not only willing to say just about anything to get “universal” checks imposed, they are willing to say it often, because they believe it’s the stepping stone to the gun control restrictions they ultimately seek.

Eight months after Bloomberg’s “40 percent” claim was refuted, President Obama repeated it during a White House event promoting his multi-faceted gun control agenda.  But this time it was one of the most the anti-gun newspapers in the country that declared it false.  Noting that Professor Cook and his 1997 study’s co-author, Jens Ludwig, had written “we don’t know the current percentage -- nor does anyone else,” the Washington Post’s FactChecker, Glenn Kessler, rated Obama’s claim “Three Pinocchios.”

Shamelessly, Obama still uses the “40 percent” claim on the White House website’s gun violence page and within his Now Is The Time gun control plan.  Similarly, the increasingly tiresome Bloomberg, who is underwriting the I-594 campaign, repeats the claim in propaganda published by his anti-gun “Mayors” and “Everytown” groups here, here, here and here.  The figurehead of his anti-gun “moms” group, Shannon Watts, repeated it on NBC’s “Meet the Press 24/7” in April.

Kelly is a former astronaut, so we could poke fun at him for being “Lost in Space” and for “astronomically” exaggerating the figure for private gun transfers, and we could urge him to “return to Earth” with his rhetoric.  For Lost in Space fans, we could even say that his figure “does not compute.”

However, what Kelly, Giffords, Bloomberg, Watts and Obama are trying to do is not a joking matter.  They are trying to deceive the public into supporting something that they know couldn’t possibly prevent criminals from getting guns, but that could pave the way for worse gun control restrictions in the future.

No amount of gun control propaganda changes the fact that most criminals get guns by stealing them, buying stolen guns on the black market, and by getting straw purchasers to go through background checks to buy guns for them.  Requiring more checks can’t change that, anti-gun activists know it, but they push for “universal” checks anyway because they believe that background check systems can eventually be morphed into registries of gun sales and, over time, registries of gun owners.

That, along with the inability of any background check system to prevent criminals from getting guns, is why defeating “universal” check restrictions and the candidates who support them should be an ongoing priority for gun owners throughout the United States.