Michael Bloomberg’s gun control operatives, currently organized under the umbrella of “Everytown for Gun Safety,” are trying to mislead legislators and the general public with a list of firearm-related incidents titled, “School Shootings in America Since Sandy Hook.” As of a June 10, 2014 update, “at least 74” such incidents are said to have occurred.

The list’s invocation of Sandy Hook and its accompanying photograph of a grief-stricken woman suggest that it documents only crimes similar to Sandy Hook, i.e., the murder of multiple students and/or teachers in their schools.

That suggestion, however, is false.

Everytown’s list stretches the parameters of the term “school shooting” past any commonly understood notion of that term. The current list includes crimes, some involving gangs, that simply happened to take place on or near school grounds; incidents where no one was injured; suicides; accidental discharges; at least one victim who may have been shot off-site and stumbled onto school grounds; defensive force; and even an off-campus crime spree that ended with police shooting the perpetrator after he ran onto the grounds of a college.

Of course, any “shooting” is a serious matter, and we do not mean to minimize the gravity of these incidents, whatever their details. Nevertheless, Everytown uses emotionally manipulative tactics to portray these incidents as something they are not.

Everytown’s list is so problematic that an investigation by CNN determined that only 15 (20%) of the incidents involved “a minor or adult actively shooting inside or near a school.” Most of the cases involved other circumstances that bear no resemblance to the Sandy Hook incident that Everytown invokes in its title. Even Politifact characterized the claimed total of 74 as “mostly false.” Its analysis quotes a former member of the FBI’s Behavioral Analysis Unit as stating “[t]here is an ocean of difference” between what average people consider a school shooting and various episodes in the Everytown accounting.

Based upon news reports concerning the episodes on Everytown’s list, which reports do not necessarily reflect the final outcome of law enforcement investigations or court proceedings:

*  Forty-six incidents (62%) involved perpetrators who were not associated with the schools.

*  Twenty-five incidents (34%) had no victims who were associated with the schools;

*  Seven incidents were suicides with no other victims;

Everytown’s attempt to portray school shootings as a pervasive and increasingly common danger ignores the truth of national trends. The Bureau of Justice Statistics (BJS) recently reported that the annual number of school-associated violent deaths, and the annual number of homicides and suicides of students ages 5-18 at school, were lower during the 2010-2011 school year than at any time in the last 20 years. Also, BJS reported that during the 2010-2011 school year there was only about one homicide or suicide for each 3.5 million students enrolled and that only two percent of youth homicides take place at schools. 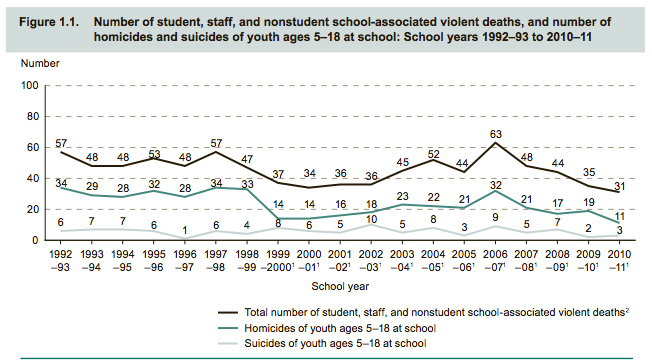 This is not the first time Bloomberg’s gun control apparatus has stooped to such tactics to mislead the public and lawmakers about firearm-related violence. Last year, Bloomberg’s Mayors Against Illegal Guns (MAIG) included the name Tamerlan Tsarnaev in a list read aloud during a bus tour which purported to tally gun violence victims “since Newtown.” Tsarnaev, however, had been killed in a shootout with police while fleeing capture in connection with the Boston Marathon bombing. An investigation later revealed that one in twelve persons on the original list used by MAIG were suspects in a crime. While MAIG offered a “sincere apology,” Bloomberg apparently hasn’t learned his lesson.