For the past six years we've chronicled in these pages how President Barack Obama has surrounded himself with radical gun-ban proponents in his cabinet. So his recent nomination of Dr. Vivek Hallegere Murthy for United States Surgeon General came as little surprise to anyone.

The National Rifle Association's strong opposition to the nomination also shouldn’t have surprised anyone. After all, the association is dedicated to the preservation of the Second Amendment rights of law-abiding American citizens. Always has been; always will be.

So why the media outrage over the situation? To put it simply, the national media has become so corrupt that they relentlessly attack anyone who dares challenge President Obama on any issue. And they’ve become so anti-gun that they automatically oppose anything the NRA does.

Anti-Gun To The Core

The surgeon general has the important tasks of providing the American public with information to be better informed when making health-related decisions and directing much of the federal government’s public health efforts. For these roles to be carried out effectively, the public must trust that the surgeon general’s actions are based on empirical and scientific evidence, rather than political or ideological motives.

In this regard, Murthy's record of political activism in support of radical gun control measures raises significant concerns about his ability to objectively examine issues pertinent to America’s 100 million firearm owners and the likelihood he would use the office of surgeon general to further his pre-existing campaign against gun ownership.

“The American people deserve a surgeon general who will carry out the mission of the office unmotivated by political or ideological goals,” Cox wrote. “Given Dr. Murthy's lengthy history of hostility toward the right to keep and bear arms, along with his calls for the full weight of the federal government's health apparatus to be used to target lawful gun ownership, there is little reason to believe that he would not work to further a gun control agenda if confirmed as surgeon general.”

You see, Murthy isn't just your average anti-gunner. He is on record as strongly advocating a plethora of new anti-gun laws that would greatly curtail the rights protected by the Second Amendment.

In 2008, Murthy co-founded the organization Doctors for Obama to support Obama's first presidential campaign and his plans for health care reform. A year later, the group changed its name to Doctors for America, and has since been used to organize support for President Obama and a variety of the administration’s political causes. The group's website currently lists Murthy as president.

In his capacity as president of Doctors for America, Murthy has offered his support for a wide array of gun control policies that have been repeatedly rejected by the American people and their elected representatives. Most instructive is a Jan. 14, 2013, Doctors for America letter to Congress, advocating for several firearm restrictions, that was signed by Murthy. A nearly identical Jan. 9, 2013, letter, which was sent by Doctors for America to the head of President Obama’s gun control task force, Vice President Joe Biden, also carried Murthy's signature.

“In a proposal that would turn a fundamental, constitutionally protected right into a privilege for the few, the letter to Congress urges mandatory licensing ‘for anyone purchasing guns and ammunition—including mandatory firearm safety training and testing,’” Cox said in the letter. “Under Dr. Murthy's scheme, further regulations would place ‘limits on the purchase of ammunition,’ and establish a ‘mandatory waiting period of at least 48 hours.’”

In the letter, Murthy also advocated for a federal ban on the sale of popular semi-automatic firearms and their ammunition. In an example of letting his ideological agenda outweigh the wealth of empirical evidence, Murthy and his group also proposed a “buyback” of these firearms to “reduce the number … that are currently in circulation.”

Another of Murthy’s proposals would strip vital privacy protections put into place to protect firearm owners and prevent the fracturing of physician-patient relationships. The letter called for removing the provision in the Affordable Care Act and other federal policies that prohibit physicians from documenting gun ownership.

Equally troublesome are Murthy's calls for the federal government to use its involvement in health and medicine to further a gun control agenda. Murthy's letter asked Congress to remove restrictions barring the Centers for Disease Control from funding anti-gun advocacy research.

The Senate Response NRA was so serious about stopping the nomination that Cox even let it be known the association would "score" the vote, meaning it would be among the votes used to determine a legislator’s NRA Political Victory Fund rating.

Typically pro-gun Republicans had already come out in opposition to the Murthy nomination. In fact, Kentucky Republican Sen. Rand Paul wrote a letter to Majority Leader Reid saying Murthy has disqualified himself from being surgeon general "because of his intent to use the position to launch an attack on Americans’ right to own a firearm under the guise of a public health and safety campaign."

“While the Senate has not yet scheduled a vote on Dr. Murthy, I have already told the White House I will very likely vote no on his nomination if it comes to the floor,” Begich wrote to his constituents.

Senate Democrats' passage last fall of the so-called “nuclear option,” which requires a simple majority vote, had all but ensured Obama's nominations would no longer be in jeopardy. Since the Senate Democratic caucus has 55 members, there is very little Republicans can do to stop a nomination.

Yet in mere days after the NRA's opposition was announced, the tide had begun to turn. Talk of as many as 10 Senate Democrats in opposition to the nomination began appearing in media reports.

Consequently, Sen. Majority Leader Reid announced his decision to delay a vote on the nomination at this time. Many speculate that such a vote won’t come until after the 2014 midterm elections.

At Reid’s announcement, the White House, still reeling from the previous month's failure to win Senate support for its nominee to lead the Justice Department's civil rights division, immediately began to backpedal. Jay Carney, White House press secretary, said that while he believes Murthy will eventually be confirmed, officials are “recalibrating” their approach to Murthy’s nomination.

And in an interview published by the New York Daily News, an unidentified Senate aide said Sen. Reid’s office had reached out to the anti-gun group Mayors Against Illegal Guns (MAIG), but had received no help from the organization in support of the nomination.

“MAIG thinks it's their fight, but it's not clear what they're doing about it,” the aide told the News. “The NRA treats every fight like it's Gettysburg, and that's why they win. Wish our side did the same.”

Predictably, the NRA's success in forcing postponement of the Senate vote on Murthy's nomination sent the media into an apoplectic rage. Reporters and columnists seemingly worked overtime to express their dismay that 5 million law-abiding American gun owners could band together to wield enough clout to halt, at least temporarily, one of President Obama’s nominations. 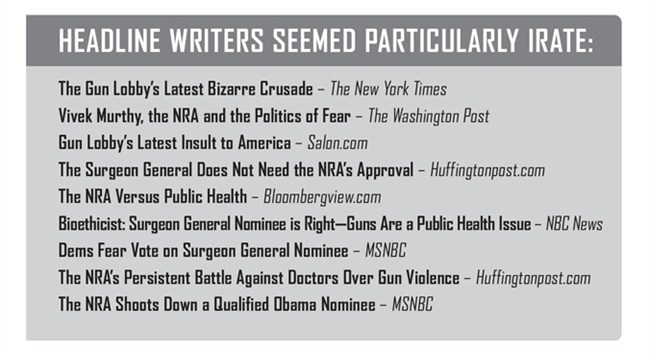 Ironically, anti-gun media outlets even turned on each other over coverage of the story. Witness Mediamatters.org, which took exception to The New York Times for mentioning NRA's charges against Murthy:

If you thought the headlines were bad, you should see what came next. In story after story, NRA was battered, belittled and besmirched.

“The National Rifle Association has mounted an outrageous campaign to torpedo President Obama’s nomination of an outstanding young doctor to be the next surgeon general of the United States because of his attitudes on gun control,” The New York Times proclaimed.

“The National Rifle Administration knows the power of fear. After all, its entire business model is based on it,” mocked The Washington Post.

“However, let’s not allow the facts about guns to distract us from the real motivations behind the NRA's tantrums. This is an election year, and Senators who support Dr. Murthy are likely to find themselves the target of the NRA’s fear-mongering tactics,” complained Huffingtonpost.com.

“The extreme gun-rights movement makes expansive claims about the benefits of gun ownership. Few of those claims pass even the crudest standards of scholarship,” slandered Bloombergview.com.

“That the National Rifle Association is poised to scuttle the president’s choice for surgeon general is both depressing and absurd,” bemoaned MSNBC.

Short on facts and long on vitriol, media outlet after media outlet took shots at NRA, never failing to actually look at Murthy’s written record of anti-gun radicalism. In doing so, however, the national media inadvertently pointed out what they really want to hide—when the chips are down, NRA is a political force to be reckoned with.

What they’ve all missed, though—and they’ve missed it for many years—is the most important fact of all: The NRA isn’t just the “gun lobby.” The NRA is you, me and 5 million other law-abiding Americans just like us who want nothing more than to see our right to keep and bear arms left alone by those who, like President Obama and Surgeon General nominee Murthy, wish to “fundamentally transform” America.

At press time for this issue, a vote on the Murthy nomination is still on hold. What will happen in the long run with the nomination remains to be seen. But the controversy highlights a fact we’ve often pointed out in these pages over the past 14 years—elections matter.

With the 2014 elections quickly approaching, we as NRA members must do our part to ensure election of gun rights supporters to both the Senate and the House of Representatives. And we must make sure that our friends, coworkers and family members also understand the importance of joining with us to protect the Second Amendment at this critical time.