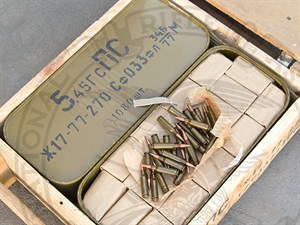 The NRA is aware of BATFE’s recent actions to restrict importation of 5.45 x 39 ammunition.  According to information BATFE provided to NRA, these actions are based on BATFE’s determination that the availability of a handgun in this caliber triggers so-called “armor piercing” ammunition provisions of federal law, which generally prohibit manufacture and importation.

NRA strongly disagrees with BATFE’s view of this matter, and we have long sought clarity on BATFE’s widely-varying approach to this issue.  We have attended meetings with BATFE, submitted written comments, and issued FOIA requests, all in an attempt to better understand the process by which BATFE exercises its considerable discretion under this broadly-worded federal law.  We have also worked with members of Congress to draft legislation to simplify the underlying federal statute and remove BATFE’s broad discretion in this area.

We have additionally been working with members of Congress to resolve the current problem of embargoed imports.  NRA has coordinated with Congressman Matt Salmon (R-Ariz.) to issue an official inquiry from his office to BATFE, asking if 7N6 projectiles have, in fact, been banned from import under new BATFE policy and asking for any explanation supporting such a ban.  At the prompting of NRA, Congressman Blake Farenthold (R-Texas) asked BATFE Director B. Todd Jones if BATFE had a new policy regarding “7N6 Russian surplus ammunition” during a hearing before the House Oversight and Government Reform Committee on troubling issues raised by recent BATFE field operations.  Jones replied that he would “look into” the issue and asked Congressman Farenthold to provide “more context.”  Further, NRA is working with members of Congress to submit additional questions to Director Jones regarding this issue.

We encourage you to contact your representatives in Congress and ask them to urge BATFE to reconsider its classification of 7N6 as armor piercing ammunition or to grant 7N6 a “sporting purposes” exemption, as it has been imported and safely used for lawful purposes for many years. You can reach your member of Congress by calling 202-225-3121 or by using our Write Your Reps tool.

If this situation illustrates anything, it is how freedom and the rule of law are imperiled when government bureaucrats are given free reign over constitutionally-protected conduct.  Remember this and act on that memory as this year's critical midterm elections approach.  Only you can tell Congress that enough is enough and that arbitrary, unexplained actions by BATFE will not be tolerated.