On Monday, the Senate announced that Sen. Dianne Feinstein's (D-Calif.) gun and magazine ban legislation (S. 150) will not be a part of the Senate’s base gun control bill, but that Feinstein will be allowed to offer it as an amendment to the gun control bill, the primary element of which is a proposal by Sen. Charles Schumer (D-N.Y.) that would criminalize the private transfer of firearms between law-abiding Americans.  The legislation is expected to be considered the week of April 8.

Feinstein’s legislation, which proposes to ban nearly every semi-automatic shotgun and detachable-magazine semi-automatic rifle, several other categories of firearms, and any ammunition magazine holding 11 or more rounds, will not be included in the Senate’s gun control bill at the outset, out of concern that it would decrease the chance of Schumer’s legislation being approved.

Also aimed at boosting Schumer’s effort, New York City Nanny-in-Chief Michael Bloomberg’s anti-gun group, MAIG, is running an ad showing a few law enforcement agency employees, who are supposed to impartially enforce laws adopted by legislatures, instead saying they “demand” that Congress pass the law that Schumer is proposing. As Bloomberg said today--not while ranting about guns, large soda pops, greasy hamburgers, or the retail display of cigarette packs, but commenting on the inevitability of drones in America’s skies--“everybody everybody demagogues on all these things.”

Feinstein said that she was “disappointed” that she will have to offer her gun and magazine ban as an amendment to the Senate bill, but that she won’t “lay down and play dead.” On Wednesday, Vice-President Joe Biden told NPR News “I think the president and I are going to continue to push, and we haven’t given up on it.” White House Chief of Staff Denis McDonough confirmed Biden’s point, telling CNN “We’re going to find the votes.” 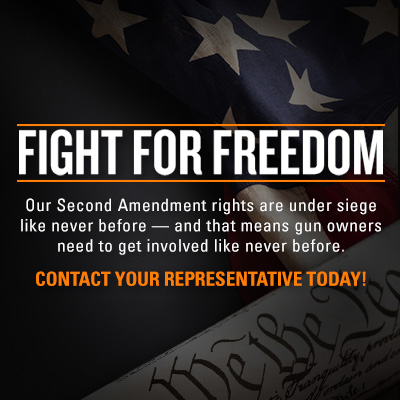 There is also strong indication that gun control supporters in the Senate may now try to push the magazine portion of Feinstein’s bill. CBS News reported on Wednesday that “some advocates for gun control want the ban on high-capacity clips to be put up as a separate amendment--essentially acknowledging it has a better chance of passing if it’s not tied to the assault weapons ban.” CBS quoted Sen. Chris Murphy (D-Conn.) as saying “I believe we need to have a separate floor vote on a high capacity magazine restriction, and I look forward to working with other senators in the coming weeks to develop a reasonable restriction on large volume magazines.”

Also on Wednesday, Colorado’s governor, Democrat John Hickenlooper, signed into law a ban on magazines that hold over 15 rounds, an awkwardly worded ban on tubular shotgun magazines that hold 28 inches of shells, and an ever more awkwardly worded ban on a combination of detachable and fixed shotgun magazines holding more than eight rounds. The state has yet to issue an interpretation of the two linguistically challenged components of the ban.

In response, Magpul Industries, manufacturer of some of the most highly-regarded AR-15 magazines made today, has established its Boulder Airlift program, “to ensure that responsible Colorado residents who want to own standard capacity magazines have the opportunity to do so” from the company’s website before the ban takes effect on July 1st. Magpul has already promised to leave Colorado because of the ban, saying “We will start our transition out of the state almost immediately, and we will prioritize moving magazine manufacturing operations first. It is disappointing to us that money and a social agenda from outside the state have apparently penetrated the American West to control our legislature and Governor, but we feel confident that Colorado residents can still take the state back through recalls, ballot initiatives and the 2014 election to undo these wrongs against responsible Citizens.”

Please contact your elected officials today, and respectfully urge them to protect our Second Amendment rights. To identify and contact your legislators in Washington, D.C., you can use the "Write Your Reps" feature at www.NRAILA.org, or you can reach your member of Congress by phone at 202-224-3121.