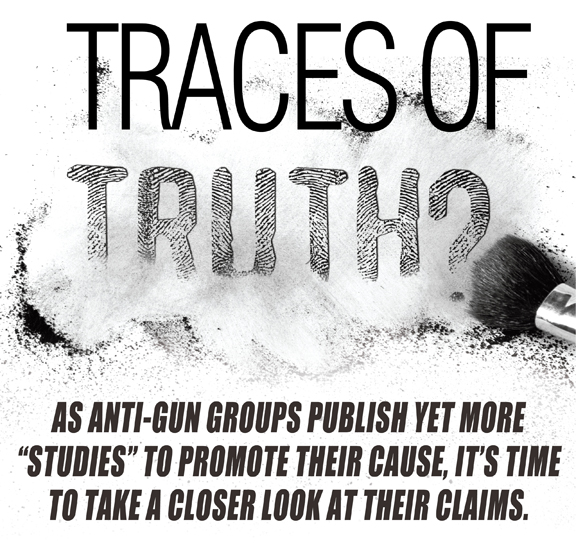 Have you ever wondered where gun control supporters have been getting their information when they say "studies show" that gun control reduces crime, or that new laws would prevent crime?

After all, studies conducted by or for the U.S. Congress, the National Institute of Justice, the National Academy of Sciences, the Library of Congress and the Centers for Disease Control and Prevention have found no evidence that gun control reduces crime in this country or abroad. And surveys of convicted felons (reported by the Bureau of Justice Statistics) undercut two of the restrictions that gun control groups most want to impose; those studies show that only tiny percentages of criminals use "assault weapons" or get guns of any sort from gun shows.

Furthermore, annual statistics reported by the FBI show that the nation`s violent crime rate has been cut by more than a third during the last two decades, down to a 35-year low. That drop happened during a period when many restrictions on buying and carrying guns were eliminated at the federal, state and local levels.

So again, what`s their evidence? Generally, gun control supporters deliberately avoid statistics collected under the Uniform Crime Reporting program run by the FBI, which uses crime information submitted by state and local governments. And they also avoid studies conducted by anyone other than fellow gun control supporters.

Instead, they often base their claims on Bureau of Alcohol, Tobacco, Firearms and Explosives (BATFE) traces of firearm sales records. They do this even though BATFE states on its tracing reports that "Not all firearms used in crimes are traced and not all firearms traced are used in crime. . . . The firearms selected [for tracing] don`t constitute a random sample and should not be considered representative of the larger universe of all firearms used by criminals."

For example, in the late 1980s and early 1990s, state and local law enforcement agency reports showed that "assault weapons" were used in only about one to two percent of violent crime. But, because "assault weapons" were a politically hot topic, police departments were more likely to request traces on these guns than on other guns taken from criminals. In a 1992 report on the limitations of the tracing system, the Congressional Research Service noted that traces requested by Detroit police in 1990 had "focused specifically upon `assault weapons.`" Not long after that, NRA-ILA research personnel visited the BATFE`s Tracing Center in West Virginia, where they were told that all of the firearms the New York City Police Department had requested to be traced in a recent year were semi-automatics.

Because "assault weapons" were disproportionately traced in those days, politicians who wanted to ban them claimed that the guns were disproportionately "used in crime." Typical of the one-liners that ban supporters wrote into press releases and repeated any time the cameras were rolling, former Congressman Butler Derrick, D-S.C., claimed the guns were "16 times more likely to be traced to crime than other firearms."

Things haven`t changed in the decade and a half since then. In September, when New York City Mayor Michael Bloomberg`s gun control group, Mayors Against Illegal Guns (MAIG), released a "study" that claimed to show a correlation between "weak" state gun laws and the acquisition of guns by criminals in other states, The Baltimore Sun misinformed readers that MAIG had identified states that accounted for half of all guns "traced to crime scenes in other states."

If "traced to crime" doesn`t sound right, there`s a reason: Traces don`t trace guns to crimes. A trace is not some sort of "CSI"-like forensic procedure comparable to test-firing a gun to see if the rifling marks it makes on a bullet match those found on a bullet recovered at a crime scene. Most traced guns are never sent to BATFE for examination.

In the real world, a trace is a two-part paperwork exercise which, if successful, identifies a firearm`s first retail purchaser. First, a law enforcement agency submits a firearm`s make, model and serial number to BATFE. Second, BATFE asks the firearm`s manufacturer or importer to identify what distributor bought the gun, then asks the distributor what local dealer bought the gun, and so on until the agency identifies a retail buyer.

That`s it. The tracing system has never been intended to lead to general conclusions about criminal activity involving guns. As the Congressional Research Service said in a 1992 report, "The ATF tracing system is … designed to help law enforcement agencies identify the ownership path of individual firearms. It was not designed to collect statistics." (Emphasis added.)

The main purposes of traces are to find the source of specific guns involved in specific crimes, and to identify people involved in illegal trafficking of firearms. For example, if traces on several guns used by several criminals to commit several unrelated crimes reveal that all of the guns were recently bought by the same person, it`s a safe bet that the BATFE and local authorities will probably be giving that person a closer look.

But for gun control supporters, the main purpose of traces is propaganda. In 1981, Cox Newspapers—no relation, I assure you—used trace figures to claim that the inexpensive handguns they called "Saturday Night Specials" were "the overwhelming weapon of choice among modern criminals," a view disputed in those days by the Police Foundation and, separately, by criminologist Gary Kleck, who found the guns to have been used "in only 1 to 3 percent of all violent crimes."

In 1989, Cox Newspapers again used traces, this time to characterize "assault weapons" as "the favored weapon" of criminals, even though they accounted for only 7 percent of firearms that BATFE had traced in the previous three years.

After "assault weapons" were banned from importation through a series of agency actions in the late 1980s and early 1990s, and banned for domestic manufacture and sale under the 1994 crime bill, gun control supporters again misused traces when they returned to pushing bans on "Saturday Night Specials." In 1996,

Clearly, there are many problems with using the tracing system for purposes other than those for which it was designed. Yet gun control supporters today rely on traces for their propaganda more than ever before.

For example, in its September 2010 "study," MAIG said that of guns traced by agencies in Maryland, 11 percent had originally been sold in Virginia, and smaller percentages had been sold in Pennsylvania, North Carolina and West Virginia. MAIG likes to imply that most interstate movement of guns involves illicit trafficking, so it only indirectly noted that many of these guns could have been brought into Maryland legally, whether recently or many years ago. The solution, MAIG claims, is for all states to have 10 specific state-level gun control laws the group favors.

As it turns out, there is no correlation between a state's crime rate and whether it has any of the 10 state-level gun laws the group advocates. In fact, murder rates average 70 percent higher in major U.S. cities where seven or more of the 10 MAIG-supported laws apply, than in cities where none of those laws are in force. And while BATFE considers firearm trafficking most likely to be indicated when a gun ends up in a criminal's hands within two years of its original sale, firearms traced by BATFE are 11 years old, on average.

Only briefly noted by MAIG is that most traced guns (70 percent nationally) were originally sold in the same state where they're eventually traced, and that those originally sold in other states generally come from neighboring states, regardless of their laws. (For example, restrictive California is the largest source of guns traced to out-of-state sources by agencies in Oregon, Nevada and Arizona.) Finally, guns sold in the 10 states that MAIG says are most responsible for interstate gun trafficking, are actually only one-third as likely to end up being traced from other states.

Traces are conducted on firearms, not on baseballs, spark plugs or frying pans. But that's about where the relevancy of traces to gun control restrictions ends. Unfortunately, as long as reporters lift their "news" stories from gun control groups' press releases, MAIG and its allies will continue to mischaracterize traces without fear of being held to account by anyone—other than well-informed gun owners.

Virginia: AG-Elect Jason Miyares to Focus on Punishing Criminal Actions Instead of Law-Abiding Gun Owners
Have we become too paranoid about mass shootings?
Widespread Ignorance: Americans Wrongly Believe Most Gun Deaths in US Are Homicides and Mass Shootings