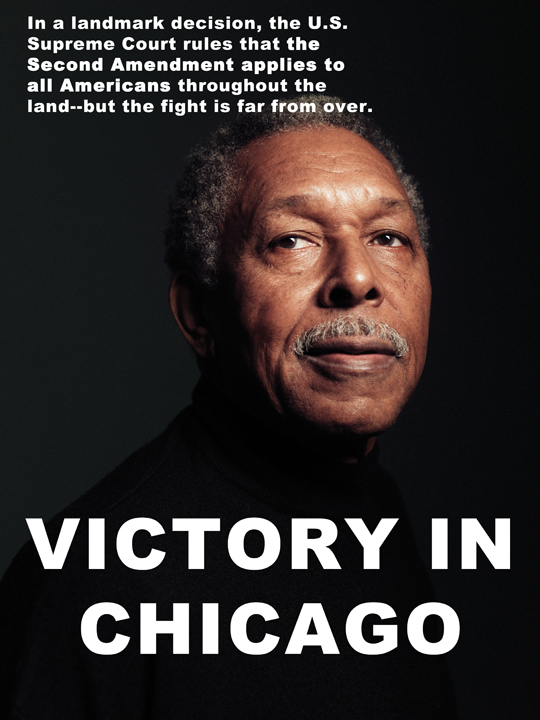 Former Solicitor General Clement effectively rebutted this call for a “watered down version” of the Second Amendment during his oral argument on behalf of NRA, and the Court agreed: “[I]ncorporated Bill of Rights protections ‘are all to be enforced against the States under the 14th Amendment according to the same standards that protect those personal rights against federal encroachment.’”

The Court also rejected Justice Breyer’s arguments. Breyer first argued that the right to arms should not be incorporated because it is not recog-nized as fundamental by “popular consensus.” As the Court pointed out, there’s no legal rule that requires a “consensus” to support a right--and even if there were, the “friend of the court” brief joined by 58 senators and 251 House members, and another brief by 38 state attorneys general, clearly show a consensus in support of the right.

Second, Justice Breyer argued that the right does not protect minorities or persons neglected by those in power--a strange claim that (as the Court noted) several pro-gun briefs submitted by women legislators and by representatives of minority groups rebutted in detail.

Third, Justice Breyer complained that enforcing the Second Amendment would limit experimentation by states. (Justice Stevens had a similar complaint.) But as the Court said, “... this is no more remarkable with respect to the Second Amendment than it is with respect to all the other limitations on state power found in the Constitution.” The whole point of the Bill of Rights is to stop runaway “experimentation.”

Finally, the Court rejected Justice Breyer’s claim that incorporating the Second Amendment would force judges to assess the costs and benefits of firearm restrictions. On that point, the Court pointed out that it had “specifically rejected” Justice Breyer’s suggestion of an “interest-balancing test” in his dissenting opinion in Heller.

That point is worth a closer look, because it reveals the strategy that opponents of our Right to Keep and Bear Arms plan to use. Justice Ginsburg said in a December 2009 speech that dissenting opinions should be used to guide a “future, wiser” Court--and pointed to the Heller case as an example.

In McDonald, Justice Breyer made clear that this is his plan when he pointed to recent criticisms of Heller by academics who disagreed with the opinion’s analysis of history. He asked, “If history, and history alone, is what matters, why would the Court not now reconsider Heller in light of these more recently published historical views?”

For gun owners, the bottom line isn’t history--it’s politics. If gun owners want to avoid the kind of “future, wiser” Court that would reverse both Heller and McDonald, they need to pay close attention to elections--starting right now.

After all, while the Supreme Court sets itself apart from the “political branches,” the “political branches” that nominate and confirm Supreme Court justices are the branches that NRA members and other gun owners can directly influence. Case in point: NRA members helped elect President George W. Bush. President Bush nominated Chief Justice Roberts and Justice Alito, who held in favor of our Right to Keep and Bear Arms in Heller and McDonald. On the other hand, President Obama nominated Justice Sotomayor, who joined a dissenting opinion in McDonald, saying the Second Amendment right is not fundamental. Clearly, elections matter.

So, while McDonald is a great victory for NRA, gun owners and all who care about freedom, it’s yet another reminder that freedom isn’t free. Without your commitment in the past, this victory would have never happened. Without your energy in the future, it could be reversed. We must remain vigilant in protecting our rights for decades to come.