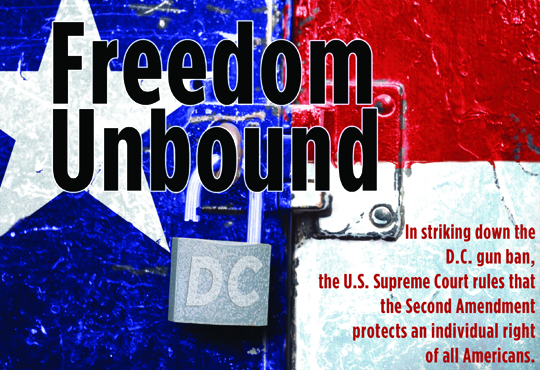 The Constitution is making a comeback in our nation’s capital.

June 26, 2008, was a great day for America--the day the United States Supreme Court declared the D.C. gun ban violated the Second Amendment. And it could not have happened without the citizen-activists of the National Rifle Association.

The 5-4 decision in District of Columbia v. Heller was the very last one announced at the end of the Supreme Court’s 2007-08 term. Justice Antonin Scalia, recognized by his colleagues as the court’s expert on firearm law and policy, wrote the majority opinion, which was joined by Chief Justice John Roberts, and by Justices Clarence Thomas, Anthony Kennedy and Samuel Alito.

The opinion held that the Second Amendment guarantees an individual right of all Americans, and is not limited to members of the militia or National Guard. The D.C. ordinances that ban handguns, and that prohibit self-defense in the home with any gun, violate the Second Amendment, the Supreme Court ruled.

Justice John Paul Stevens authored a dissenting opinion, joined by Justices David Souter, Ruth Bader Ginsburg and Stephen Breyer. In it, they argued that the Second Amendment protects only a miniscule individual right, which applies, at most, to actual militia duty.

Justice Breyer wrote an additional dissent, which was also joined by the other three dissenters. They contended that even if the Second Amendment protects all law-abiding citizens, the handgun ban should be upheld because it is “reasonable.”

Yet Justice Scalia’s majority opinion was impressively well informed on the Second Amendment scholarship of the past three decades, and stole the spotlight. Scalia cited the research of Stephen Halbrook, Eugene Volokh, Joseph Olson, Clayton Cramer, Joyce Malcolm and many other scholars.

After setting forth the facts of the case, Scalia’s opinion began with a meticulous textual analysis of the words of the Second Amendment. This analysis was supplemented by careful attention to the many early American and English sources that demonstrated the meaning of the various words.

Justice Stevens’ dissent made a frantic effort to read the Second Amendment as militia-only, but it was heavily dependent on implausible inferences and leaps of reasoning. For example, Justice Stevens noted that in the late 18th century, the phrases “keep arms” and “bear arms” were often used to refer to arms possession and use in military bodies such as the militia. But as Justice Scalia demonstrated, there are also many examples of both phrases being used to refer to owning and carrying guns for other purposes, such as self-defense and hunting.

Having analyzed the text of the Second Amendment, the majority opinion detailed the interpretation of the Second Amendment in the first half of the 19th century. Quoting the words of St. George Tucker, William Rawle and Joseph Story, Justice Scalia showed that virtually every legal scholar of the time, along with state and federal courts, recognized the Second Amendment as protecting an individual right to have guns for various purposes, including self-defense.

As Justice Scalia explained, after the Civil War, Congress passed the Freedmen’s Bureau Act of 1866, the Civil Rights Act of 1871 and then the Fourteenth Amendment with the explicit purpose of stopping southern state governments from interfering with the Second Amendment rights of former slaves to own firearms to protect their homes and families. All of the scholarly commentators of the late 19th century--including the legal giants Thomas Cooley and Oliver Wendell Holmes, Jr.--recognized the Second Amendment as guaranteeing an individual right.

Quite significantly, the Heller majority observed that the Constitution does not grant a right to arms. Instead, the Constitution simply recognizes and protects an inherent human right: “It has always been widely understood that the Second Amendment, like the First and Fourth Amendments, codified a pre-existing right,” the opinion stated. “The very text of the Second Amendment implicitly recognizes the pre-existence of the right and declares only that it ‘shall not be infringed.’”

The 1876 Cruikshank case had made the same point. The Heller opinion quoted with approval the words of the greatest legal scholar of the 18th century, William Blackstone, who wrote that the right to arms in the English Declaration of Rights protected the “natural right of resistance and self-preservation.” Similarly, the Heller majority quoted the 1846 Georgia Supreme Court decision in Nunn v. State, which “construed the Second Amendment as protecting the ‘natural right of self-defence.’”

The Stevens dissent placed great reliance on its claim that the Supreme Court’s 1939 decision in United States v. Miller had conclusively found that the Second Amendment has no application outside of the militia. But it seems questionable whether Justice Stevens, or the other justices who joined his dissent, had read Miller carefully. The dissent described Miller as “upholding a conviction …” .

To the contrary, the Miller case came to the Supreme Court after a federal district court dismissed an indictment. The accused criminals in Miller had never been put on trial, let alone convicted.

As Justice Scalia explained in the majority opinion, the Miller opinion actually turned on whether the particular type of gun was protected by the Second Amendment, and did not declare that only members of the militia had a right to arms. Besides, the reasoning in Miller was cursory and opaque.

Significantly, as detailed in a law review article cited by Justice Scalia, Miller was apparently a collusive prosecution in which the defendant’s lawyer and the trial judge cooperated with the U.S. attorney’s scheme to send the weakest possible Second Amendment case to the Supreme Court as a test case, thus ensuring that the National Firearms Act of 1934 would be upheld. In the case, the defendant’s lawyer did not even present a brief to the Supreme Court.

In response to Justice Stevens’ assertion that “hundreds of judges” have relied on the anti-individual rights interpretation of Miller, Scalia fired back: “Their erroneous reliance upon an uncontested and virtually unreasoned case cannot nullify the reliance of millions of Americans (as our historical analysis has shown) upon the true meaning of the right to keep and bear arms.”

Perhaps the gun ban that is most clearly unconstitutional under Heller is another D.C. law that was not at issue in the case: D.C.’s semi-auto ban.

D.C. outlaws any self-loading rifle or handgun for which there exists a magazine holding 12 or more rounds. For example, the Colt 1911 comes with a standard 7-round magazine.