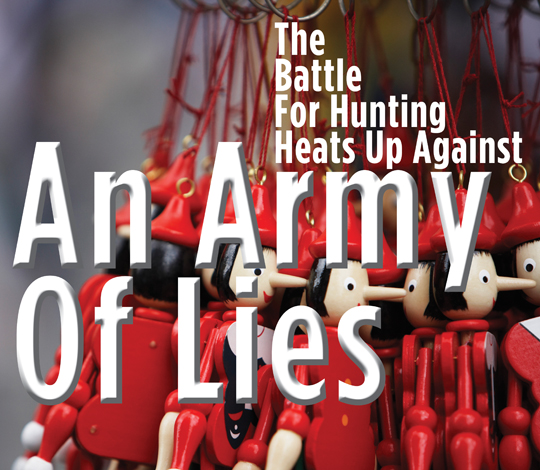 When Wayne Pacelle, head of the anti-hunting Humane Society of the United States, recently wrote a column stating that hunters have more in common with his group than with the National Rifle Association, he told one lie too many, prompting a quick and thorough rebuttal from NRA staffers involved in promoting hunting.

Wayne Pacelle, president and CEO of the Humane Society of the United States (HSUS), recently made some blatantly false accusations about the NRA.

You can read the full text at here, but among his claims is that the NRA “defends terrible wildlife abuses,” “deviates from ethical standards of hunting” and attempts to hide these practices from the public.

Pacelle also states, “What the HSUS attempts to do in the hunting arena is hold the hunting community to its own professed standards, and to put a stop to hunting practices at odds with the core notions of fairness and, particularly, inhumane or wasteful killing.”

Note to Pacelle: Hunters do not need you telling us how to meet our standards or what our notion of fairness is supposed to be.

To put Pacelle’s comments in perspective, let’s examine where the HSUS truly stands on hunting.

The truth is that HSUS is out to ban all hunting. They just can’t be honest about it because even they know their positions are too extreme for public acceptance. But their actions prove it.

The HSUS lobbies against liberalizing youth hunting laws. What is “cruel and extreme” about kids spending quality time in the outdoors with their parents in an activity that the National Safety Council says is one of the safest forms of recreation in America?

HSUS also helped ban dove hunting in Michigan and spent millions of dollars to do so. Doves are the most hunted game bird in America—does that make all dove hunters “cruel and extreme”?

The HSUS often talks about “canned hunting,” then uses it as a springboard toward banning regular hunting. Pacelle’s own legislation in Colorado this year would prohibit hunting if any fence impairs an animal’s movement. This includes cattle fences—in a state with hundreds of thousands of acres of huntable ranch land.

The HSUS also opposes aerial predator control, which is not a method even used by typical hunters at all—in fact, it is an essential management tool used by state wildlife agencies. Without aerial control of wolves in Alaska, for instance, moose and caribou populations would be decimated. Professional wildlife managers know this.

And most recently, HSUS officials have even called for a nationwide ban on lead shot.

To address some of Pacelle’s attacks on NRA specifically:

He highlights the Bear Protection Act (H.R. 5534), which NRA opposed, as a shining example of how we “defend wildlife abuses.” (By the way, the bill was pulled off the calendar in April, but we expect it to resurface again in the future.)

“On Capitol Hill,” Pacelle says, “NRA has lobbied against the Bear Protection Act, but it has not called on its members to fight the bill. If it did, I am quite sure many of them would disagree with the idea that an anti-poaching bill is at odds with NRA principles.”

Let’s set a few things straight. First, we were very open about our position on this bill and we did “call on our members” to fight it. NRA posted an article about it on www.NRAhuntersrights.org on April 25, and we sent out an e-mail alert about it to our members on April 21.

Second, Pacelle would have you believe that the Bear Protection Act was a groundbreaking bill designed to protect bears from poaching and ban the interstate and international trade of bear gallbladders. Further, the group attempts to create the public perception that bear populations in America are somehow in jeopardy, when nothing could be further from the truth—black bear populations are not only stable, but are growing virtually everywhere.

In the April 21 e-mail alert we sent to NRA members, we explained the true intent of the bill. We said, “The Humane Society of the United States (HSUS) and other radical anti-hunting/animal ‘rights’ groups are lobbying Congress to pass H.R. 5534, the so-called Bear Protection Act, as an important step in their strategy to ultimately ban all bear hunting in America.”

And in our April 25 article we stated:

“In fact, bears in this country are already protected from poaching by state wildlife regulations, and interstate movement of viscera from or into a state where possession, use or sale is illegal, is already subject to prosecution under the Lacey Act. Congressional testimony from the Association of Fish and Wildlife Agencies and the U.S. Fish and Wildlife Service shows that the demand for bear gallbladders is not a significant force for poaching American bears, and international import and export laws are working … Further, the law would jeopardize law-abiding hunters who may want to transport an intact bear from the state where it was taken to another state for processing. The bill could have made such an act a federal offense.”

For the record, no one opposes poaching more than NRA. We made that clear in a letter to Congress urging defeat of the bill:

“The National Rifle Association supports managing our wildlife to healthy and sustainable levels, and we are just as concerned as anyone about the theft of those resources. As an organization that represents millions of sportsmen and wildlife conservationists, we oppose the illegal trade of bear viscera and fully support effective efforts to eliminate poaching of bears.”

Furthermore, while Pacelle has not singled them out for attack yet, a number of groups joined NRA in opposition to the bill, including the Association of Fish and Wildlife Agencies, which represents state game management agencies and the conservation experts who work for them. Other groups joining the NRA included:

• The National Assembly of Sportsmen’s Caucuses

These are all pro-hunting groups—meaning pro-conservation and pro-scientific wildlife management. So apparently, Pacelle thinks all these groups “defend terrible wildlife abuses,” too.

Still another claim Pacelle makes is that the NRA “says that any attempt to restrict any form of hunting is part of a scheme to end all hunting.” In the case of groups like the HSUS and PETA, we make that statement because it’s true. Again, Mr. Pacelle, if it’s not true, tell us what form of hunting the HSUS does support.

Pacelle makes several other bogus accusations about the NRA, but one is particularly laughable. He actually claims that the HSUS “is often more in line with hunters than either the NRA or the U.S. Sportsmen’s Alliance, which claim to support the modern system of wildlife management, but in practice oppose the imposition of any new limits or restraints.”

In fact, NRA’s model language for state constitutional “Right-to-Hunt” amendments confirms that hunting is a right “subject to reasonable regulations.” If Pacelle were right, we’d never agree to this language.

The “limits and restraints” that Pacelle is really talking about would put an end to hunting.

Let’s stick with bears as an example. Two minutes on the HSUS’ website will unearth its opposition to critically needed bear hunting in Maryland, and its praise of Gov. Jon Corzine for helping end bear hunting in New Jersey—where bears have become a dangerous nuisance because the state will not allow hunting to control and manage the bear population.

Then, keep searching the HSUS website, and there’s Pacelle’s famous quote to the Associated Press: “If we could shut down all sport hunting in a moment, we would.”

By the way, if you’re one of those hunters Pacelle speaks of who is more “in line” with the HSUS than the NRA, we’d really appreciate it if you’d let us know. Just send an e-mail to [email protected]. We’d love to know how many of you are out there.

“The National Rifle Association supports managing our wildlife to healthy and sustainable levels, and we are just as concerned as anyone about the theft of those resources.”