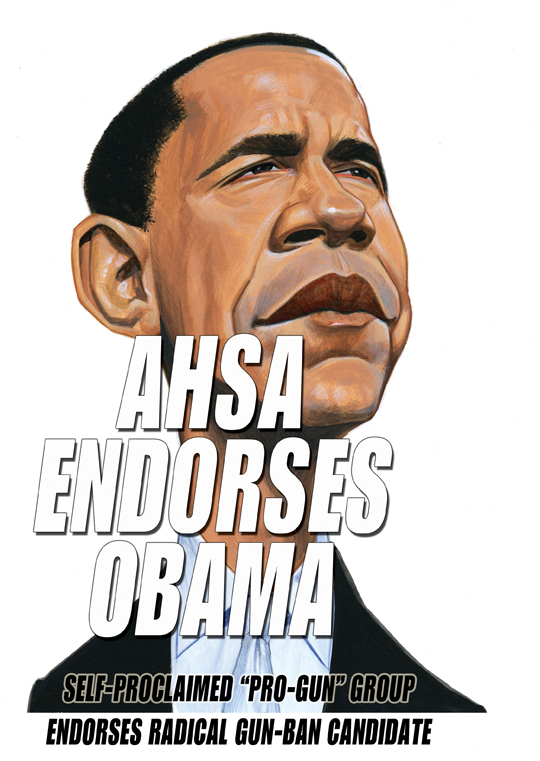 AS THIS UNUSUAL CAMPAIGN SEASON has unfolded, we`ve seen the candidates ratcheting up their politically expedient rhetoric in an attempt to distinguish themselves as the "candidate of choice" for every constituency, while testing the far reaches of credibility in the process. We`ve heard blatantly anti-gun politicians claim to be supportive of the Second Amendment. We`ve seen hypocrisy, and we`ve heard double-speak and insults to our intelligence.

Rather than talk openly about their desire to ban guns, register gun owners and regulate firearm sales, anti-gun politicians talk about their "support" for sportsmen. Rather than admit they oppose the individual right protected by the Second Amendment, they claim they "support firearm ownership for hunting."

This is all an effort to mislead and divide the gun owning community and to dilute gun owners` political impact. To achieve their goals, new organizations have been formed with names designed to confuse gun owners and hide their real agenda. The American Hunters and Shooters Association (AHSA) is one of those groups.

As we`ve reported in the past, AHSA was created to provide political cover for anti-gun politicians by allowing them to claim support from a "sportsmen`s" group. In truth, the anti-gun credentials of AHSA`s leadership is well documented. For instance, AHSA president Ray Schoenke has a long history of giving political donations to some of the nation`s most anti-gun politicians, including Al Gore, John Kerry, Barbara Boxer, Bill Clinton, Dianne Feinstein and Ted Kennedy. In 2000, Schoenke donated $5,000 to Handgun Control, Inc. (now the Brady Campaign) and the Ray and Holly Schoenke Foundation also made donations to the Brady Campaign.

AHSA Board member John Rosenthal remains the leader of Stop Handgun Violence, a Massachusetts anti-gun group. And one of the leading organizers of AHSA is Bob Ricker, who has served as a paid witness against gun manufacturers in a number of reckless lawsuits designed to bankrupt this industry.

And that`s just the tip of the iceberg. AHSA recently did the last thing one would expect of a "pro-gun" group, they endorsed Democratic candidate Barack Obama for president!
In a statement on the AHSA website titled "Obama: He `gets it,`" Schoenke announced the endorsement, saying that Senator Obama`s voting record has clearly demonstrated his commitment to the Second Amendment!

"Are you kidding?" Chris W. Cox, NRA-ILA executive director, asked incredulously. "Obama`s hostility toward the Second Amendment is so well known and well documented that in the 2004 elections, NRA`s Political Victory Fund (NRA-PVF) issued Obama a well-deserved `F` grade. Obama is anti-gun. Period. And no amount of sugar coating or spin by AHSA will change that fact."

The AHSA statement closes with the line, "Senator Obama will be a strong and authentic voice for America`s hunters and shooters and it is with great pleasure that we endorse his candidacy." While typical of the rhetoric coming out of AHSA, that line is nothing less than ridiculous.

"AHSA would be more correctly called the `American Association for the Protection of Anti-Gun Politicians,`" Cox concluded. "No gun owner or sportsman should take the group seriously or fall prey to its lies and deceptions, as clearly demonstrated by their endorsement of Barack Obama."