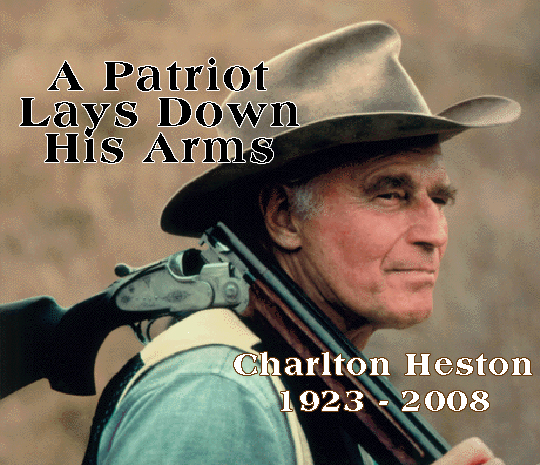 The man who brought the heavens down to Earth through the power of his God-given talent is gone away now—gone to join those whom he portrayed with such persuasion. Charlton Heston, actor, advocate for individual rights and voice of reason in a time of turbulent political manipulation, relinquished the power of his rich baritone to the angels and, following a long battle with Alzheimer’s Disease, slipped gently into that good night.

Born John Charles Carter in 1923, Heston was a man of the people, yet with the power to persuade kings. As a boy he grew to love the rugged life of the nation’s Midwestern outdoors. In his writings, Heston fondly recalled frosty morning woodstoves, the deep silence of forests seemingly without end, of “a deer on the license” harvested under a bracing autumn sky.

In time, Heston developed a flair for theater arts, a passion that followed him through high school and college. But the realization of that passion wouldn’t come easy. He worked in the steel mills to make ends meet. He survived formative years as a starving artist in New York’s Hell’s Kitchen.

When able-bodied men were needed to battle the Axis threat of global domination during the Second World War, Heston volunteered for the U.S. Army Air Force. He married his college sweetheart and remained a loving husband until the end. He won an Oscar and became the universal voice of the scriptures. He marched for civil rights and stood steadfast in his defense of constitutionally protected individual rights. And always, both as a vigorous activist in his physical prime or as an aging advocate for political common sense in a time of turmoil, Heston remained a man of character, anchored by his fiercely defended, unshakeable beliefs.

Maybe it was that instantly recognizable voice, maybe his physical bearing or maybe just the undeniable presence of a consummate actor who naturally commanded center stage. Whatever the reasons, Heston seemed destined to star in biblical dramas. He became Cecil B. DeMille’s Moses and America’s original action hero in “Ben-Hur,” the role that won Heston an Academy Award. Few who’ve seen the movie will ever forget the excitement of the chariot race that catapulted the daring young actor to fame—and won him a lasting place in the hearts of an adoring public.

Over a lengthy career, Heston remained in demand for a variety of roles ranging from Marc Anthony in Shakespeare’s “Julius Caesar” to earthy cowboy “Will Penny” to an aging simian in a sequel to the science fiction classic “Planet of the Apes.” His documentaries on the Holy Land are still cherished by millions. Yet even as a young actor in the prime of his career, and with so much professionally on the line, Heston was always his own man, ready to do moral battle. 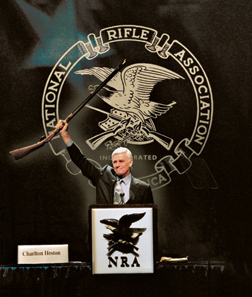 This willingness to draw such a firm barrier between what he perceived as right and wrong was as much a part of Heston’s persona as his love of good literature, especially the work of authors who weren’t afraid to throw a punch at society’s sacred cows. Heston sensed the righteousness of certain causes and never hesitated to become their gladiator. He fought against racial prejudice both in Hollywood and in the streets of America long before the cause earned Hollywood’s stamp of respectability. Heston sought equality for stagehands just as dutifully as he marched beside civil rights leader Dr. Martin Luther King, Jr. Considering the turbulence of those times, both on the streets and in the studio, his actions demanded a large leap of faith, as well as ample courage.

Heston once again made headlines and aroused the ire of the entertainment industry when, years later, the rap music movement flooded the American scene. Heston found himself appalled by the violence and degradation erupting throughout the lyrics. One of the most shocking was the album “CopKiller” by the rapper called Ice T. TimeWarner, a multimedia conglomerate Heston held stock in, distributed the record.

Hollywood’s Moses didn’t hesitate. He drove straight to a TimeWarner board meeting, demanded to be heard from the floor and began reading the lyrics aloud in a voice that caused every head in that room to swivel. He read lines that urged assaults on police officers, words that advocated the rape of young girls. And when he finished, those who only moments before had regarded Ice T as simply more lucrative business as usual, hung their heads in shame.

It wasn’t long before Time dropped Ice T from their recording label, and Heston received death threats for what he’d done. As time passed, he laughingly recalled that maybe that board meeting wasn’t in his best business interests, but he remained proud of the outcome. Not many contracts or interviews with TimeWarner would follow. Even so, the first salvo in the continuing struggle to clean up rap and hip hop lyrics belongs to a giant of a man who loved good poetry—and condemned lyrics brimming with violence and hatred.

During the 1990s, Heston viewed the world from his position as veteran actor and activist who’d enjoyed a long and lucrative career spiced by an unquenchable desire to speak out in behalf of those downtrodden. He could have slipped into his twilight years in comfort, enjoying the limelight now and then, living the good life, basking in the glow of celebrity.

But something happened that would resurrect the fire in Charlton Heston’s fighting heart. Over the years Heston, a Kennedy Democrat, watched as his party drifted to the left of the ideals that originally summoned him to serve. When grassroots activism began to wilt in favor of soaring elitism, the actor who loved to play roles depicting the common man began to drift to the right, and with that drift adopted a new party.

The newly-born Republican found his anchor in the tenet of conservative values when the NRA’s Wayne LaPierre urged him to consider speaking out in behalf of the nation’s Second Amendment right to keep and bear firearms. Heston recalled a trip to China, one in which young dissidents, who stood unarmed in front of tanks, told him how wonderful it must be to live in a country where all the people, and not just a powerful few, are blessed with the right to arm themselves against tyranny.

This was a time when pressure from the Clinton administration, along with allies in the media, were working overtime to not only gut the Second Amendment, but also demonize NRA supporters who defended it. Attacks on both firearm ownership and the NRA were vicious, and rarely factual. Sadly, though, they were accomplishing the desired effect. Congress, with its perennial finger testing the political winds, perceived that the feared NRA could be crumbling and that gun bans might equal future votes. The situation was dire, and pro-gun forces realized that a voice of uncommon stature was needed, a voice that could be captivating as well as reasonable. A call went out, and Charlton Heston stepped forward to fulfill what would be his last, and undoubtedly his finest, role. 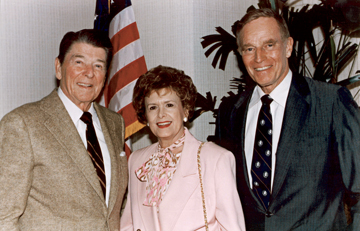 Few at the time realized the impact he would have on that turbulent stage. Within weeks the world saw the man they knew as Hollywood’s Moses standing on the most violent corners of America’s most dangerous streets, his booming words reminding listeners that