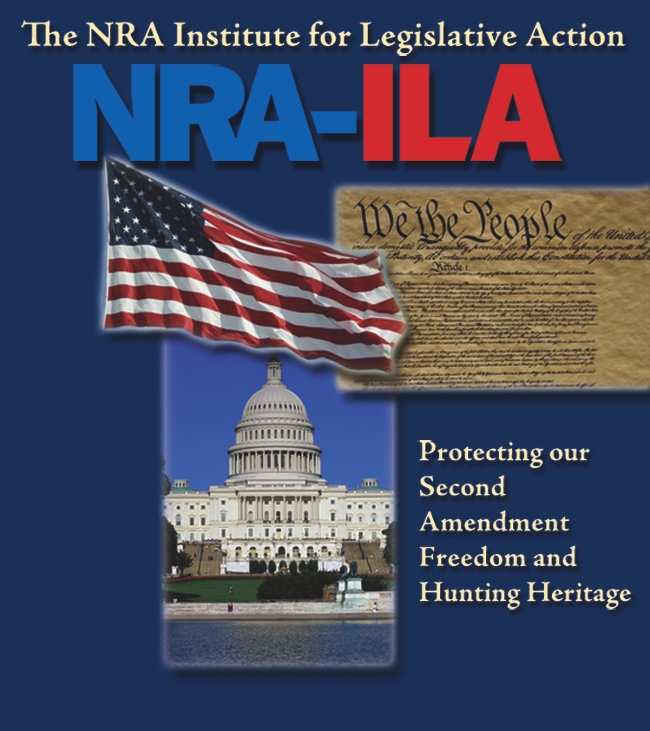 What is NRA-ILA?
A Message from the NRA-ILA Executive Director

“The NRA-ILA shall have sole responsibility to administer the legislative, legal, informational and fundraising activities of the Association relating to the defense or furtherance of the right to keep and bear arms…”

The NRA Institute for Legislative Action (NRA-ILA), established in 1975, is the NRA’s lobbying and political arm. Our reputation as the largest and most effective defender of the Second Amendment freedom and hunting heritage of law-abiding Americans is well known.

Less well known is the full scope of our activities, and the record of success we continue to build. NRA-ILA is a single-issue organization, but that includes every issue that directly or indirectly affects ﬁrearms ownership and use. These topics include not only Second Amendment rights, but also hunting, wildlife conservation, law enforcement issues, product liability, and criminal justice reform.

Even less well known is the fact that NRA-ILA operates almost exclusively on donated funds, above and beyond the regular membership dues paid by NRA members. Without the contributions made by hundreds of thousands of donors, ILA simply wouldn’t have the resources to undertake the critical efforts in which we engage every day.

After you read about these activities, it is my hope that you will join our supporters on the front lines in defense of freedom.

From the halls of Congress to town halls on Main Street, NRA-ILA maintains a vigilant watch over our Second Amendment freedom. When politicians propose pointless restrictions on our Right to Keep and Bear Arms, NRA-ILA is there. We do the research and come armed with the facts. We explain the real-world impact of gun control schemes to lawmakers who might not know otherwise.

Most importantly, our ability to ﬁght successfully for the rights of America’s law-abiding gun owners is a direct reﬂection of the support of NRA’s nearly four million members. When restrictive legislation is proposed at any level of government, we marshal our grassroots supporters to make their voices heard. NRA members are alerted, and they respond in droves with letters, faxes, emails, phone calls and personal visits.

Politicians understand the need to be responsive to the voters who elected them. NRA-ILA’s power does not come from Washington, D.C. Our power comes from millions of supporters from every corner and community of the nation, who are ready, willing and able to take an active role in the legislative and political process. That’s why NRA has won the number one slot in Fortune magazine’s “Power 25” list of the most influential lobbying groups in America.

Legislative action is a constant war, fought on multiple battleﬁelds simultaneously. And like any successful campaign, it takes resources to win.

Political Action
If They Don’t See the Light, We’ll Make Them Feel the Heat

The NRA Political Victory Fund (NRA-PVF) is a federally registered Political Action Committee. NRA-PVF is one of the most important tools in the NRA-ILA arsenal, and is funded solely by the generous contributions of NRA members. Thousands and thousands of small contributions add up to fund one of the largest PACs in operation today.

Unlike many other PACs, however, NRA-PVF does not limit its scope to simply making direct contributions to campaigns. The PVF war chest is deployed by NRA-ILA’s top strategists in every election cycle to communicate powerful messages to the general electorate.

It’s all on the line every Election Day. Not just in top-line presidential races, but also in senatorial, gubernatorial, and congressional races…not to mention nearly ten thousand elections for state legislative seats.

If a lawmaker can affect our freedoms, NRA-PVF is watching. And when a lawmaker threatens our rights, PVF stands ready to strike.