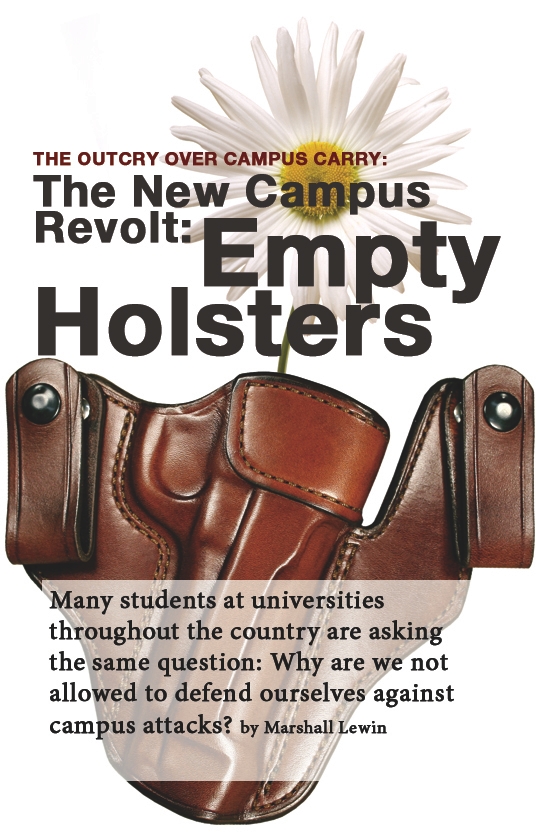 Should you have less freedom and safety than anyone else simply because you go to college?

Should society trust you less than your brothers and sisters of equal age simply because you attend college and they don’t?

If you’re mature enough and responsible enough to cast a vote, fight a war, own a gun, carry a gun and exercise every other right of citizenship that every other adult citizen enjoys, then why should you be disarmed and defenseless at institutions of higher learning?

In the aftermath of last April’s massacre at Virginia Tech, in which an armed maniac killed 27 students and five faculty members before killing himself, more and more students are asking life-and-death questions like these of their politicians and professors.

In late October, that movement took to the streets in the form of so-called “empty holster protests” at over 110 college campuses in 38 states and the District of Columbia.

Led by a group called “Students for Concealed Carry on Campus,” students wore empty holsters to protest state laws and student codes of conduct that prohibit them from exercising the Right to Carry on campus--even if they have Right-to-Carry permits.

“As a college student and a concealed handgun license holder, when I step onto campus I am left unable to defend myself,” group founder Chris Brown, a political science major at North Texas University, says on the organization’s website. “My state allows me to carry a handgun in public, but there is some imaginary line drawn around college campuses for silly reasons. And those silly reasons are getting people killed, raped and robbed.”

Or, as one of the group’s leaders notes in an e-mail signature evoking the tragedy at Virginia Tech, “Campus policies left students shooting back with camera phones. Life’s worth more than pictures.”

Yet many state legislatures and college administrators don’t seem to think that students’ lives--or the lives of faculty, staff and visitors--are worth as much as their own.

Even though 40 states have fair Right-to-Carry laws, 36 states ban carrying firearms at schools, while 20 of those specifically outlaw firearms on college campuses.

Even before the shootings at Virginia Tech, many were calling for the Right to Carry to be restored on college campuses. Ironically, a bill that would have required colleges in Virginia to allow Right-to-Carry permit holders to exercise that right on campuses failed in committee not long before the Virginia Tech tragedy.

After that crime, four states proposed bills to allow concealed firearm license holders to carry on college campuses. Such bills failed in Alabama and South Carolina, but at this writing a bill is still pending in Michigan and Ohio.

Additionally, Louisiana’s legislature defeated a proposed ban on firearms in college dorms and Maine rejected legislation that would have allowed colleges to prohibit firearms.

While lawmakers delay, debate and defend the status quo--in which college students basically are accorded the status of second-class citizenship--too many of those students are becoming victims of crime.

In a one-week period in late September alone:

Yet despite proclaiming their intention to stop “gun violence,” the gun-ban lobby doesn’t seem to have much sympathy for the victims of college campus disarmament. In response to a question regarding the empty holster protest, Peter Hamm, spokesman for the Brady Campaign, mocked, “You don’t like the fact that you can’t have a gun on your college campus? Drop out of school.”

Not to be thwarted, however, some college students aren’t giving up the fight as easily as the gun-ban lobby would hope.

When a friend proposed the idea of carrying empty holsters to show how lawful students had been disarmed, Michael Flitcraft, a 23-year-old sophomore at the University of Cincinnati, says he took the idea and ran with it.

Soon dozens of students, and ultimately over 100 colleges, joined in the empty holster protest.

While drawing attention to the injustice of denying college students their constitutional rights, the protest also helped educate the public and open a constructive dialog on many campuses.

“People are under the impression that this is going to suddenly put guns in the hands of college students,” said Scott Lewis, a media coordinator for Students for Concealed Carry on Campus. “We have to explain that, ‘No, this isn’t going to change the laws on who can get a gun, and it’s not going to make it legal to carry a gun while under the influence. It’s just going to give people on college campuses the same rights that they already have anywhere else.’”

“I had somebody tell me, ‘I’d just be terrified if I knew somebody was carrying a gun.’ So I asked them, ‘Why?’” said Jay Adkins, a senior at East Tennessee State University who helped organize the empty holster protest at his school.

“They had this idea that guns would just randomly go off, or that people would break out into gunfights all the time,” Adkins said. “But when you confront them with the facts that people do this in regular society every day, all the time, and nothing happens, they realize that college students can be just as responsible as any other adults.

“We’re all adults. We just want people to realize that we don’t suddenly become less responsible when we walk onto a campus.”

Even if the media are biased in their coverage--the protest did draw some very negative press comments--many involved believe the publicity helps their cause more than the bias hurts it.

“If it’s big enough to get the media’s attention and warrant a story,” said Flitcraft, “then it’s going to get the word out. And that can only help.”

The Siren Song of Security Schemes

In the wake of the mass murders at Virginia Tech, colleges have adopted various official responses while basically steering away from any serious, open-minded discussion of the firearms option.

Virginia Tech installed sirens last spring that, ironically, got their first use on the day of the April 16 tragedy.

Technology companies are now selling schools mass notification systems based on e-mail, text-messaging, phone calls, RSS computer feeds, PA systems and digital billboards. One such company, Omnilert LLC, reported that the number of schools using its systems jumped from 25 to over 200 after the Virginia Tech tragedy.

For its part, the International Association of Campus Law Enforcement Administrators--whose members bank on being the only armed presence on campus--has warned that allowing students who have Right-to-Carry permits to carry on college grounds “has the potential to dramatically increase violence on our college and university campuses.”

Indeed, despite assurances from some university authorities that everything is on the table when it comes to campus security, the options offered almost never include the only option that can even the odds by meeting force with equal force--good people carrying firearms to protect themselves against violent criminals.

Though the gun-ban lobby will never admit it, and the anti-gun media are loath to report it, even though guns are banned at schools throughout most of the United States, firearms in the hands of peaceful, ordinary citizens have proven decisive in stopping some school shootings.

Of course, the gun-ban lobby loves to raise the specter of minor disagreements escalating into free-for-all shootouts among Right-to-Carry permit holders. But after crying “Wolf!” for so many years as state after state adopted Right to Carry--and seeing their dire predictions fall flat each and every time--the gun-ban lobby lost its credibility.

Consequently, gun haters shifted their story line from tragedy to comedy, ridiculing Right-to-Carry permit holders as juvenile would-be John Waynes or James Bonds, before suggesting, with infinite parental patience, that things don’t work like they do in the movies, and that armed good guys would never be able to shoot as well as armed bad guys.

What’s worse, though, is what such mockery and derision represent: an attempt to stifle the exchange of ideas and debate about a serious issue. In other words, hardly the kinds of things one would hope to “learn” at today’s “institutes for higher learning.”

As Scott Lewis pointed out in The Washington Times, “Whenever proponents of concealed carry point to its success throughout the nation, as well as studies showing that concealed handgun license holders are significantly less likely than non-license holders to commit violent crimes, they are answered with mockery, rather than intelligent discourse. In the world of academia and intellectual free expression, some issues are apparently not open for discussion.”

In the end, the issue isn’t so much whether the good guys prevail, or whether free speech is upheld. What really matters is whether the God-given right of self-defense is acknowledged and respected by the powers that be.

As Andrew Dysart, a senior at Virginia’s George Mason University who organized that school’s chapter of Students for Concealed Carry on Campus, argued, “There’s no guarantee to know either way whether the Right to Carry could have changed anything at Virginia Tech. But I believe those students should have been allowed at least the choice to have a chance of saving themselves. That’s what’s at issue here: whether or not students should have that option.”