Will State Constitutions Protect the Future of Hunting? 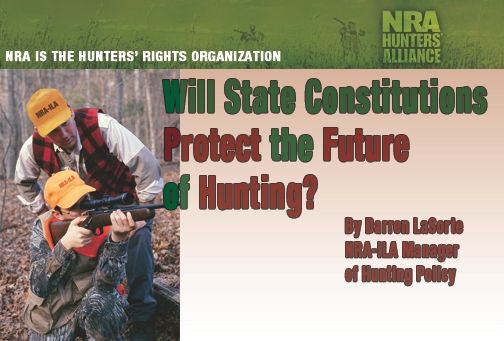 Over the last few years, NRA-ILA has been working diligently to change the course of the well-intended campaign to enshrine the Right to Hunt in state constitutions. Voters in eight states have overwhelmingly approved these constitutional amendments since 1996. Vermont, the only other state with a constitutional protection of hunting, has had its provision since 1777.

The language in the eight state constitutions amended during the last decade generally recognizes that the people have a right to hunt pursuant to laws and regulations. While NRA-ILA has supported the adoption of these provisions, we have concluded that a more aggressive approach is necessary in order to provide truly meaningful protections against the anti-hunting zealots who are conspiring daily to put an end to our proud and honorable heritage. Because it’s been done one way in the past does not mean that it cannot be improved in the future. After all, we often have only one bite at the apple when it comes to amending a state constitution.

This new approach provides specific protections against the kinds of prohibitions most likely to be sought by Wayne Pacelle’s Humane Society of the United States (HSUS) and others. It is hard to argue that including more specific language in a constitutional amendment is bad, especially in an age when many judges seem to believe that their personal political agenda trumps the plain language of constitutions. Addressing specific issues limits the potential for mischief from the bench.

Make no mistake about it; the threat to our sporting heritage posed by HSUS’ Pacelle and the young anti-freedom crusaders his $120 million-a-year organization is funding is real. They are hoping that the continuing population shifts from rural to urban America and the associated changes in values will soon provide for a political climate that will allow the majority of non-hunters to crush the hunting minority—relegating us to political insignificance. For the time being, however, polls show that hunting is supported by a healthy majority of Americans. They understand that America’s hunters are the nation’s true conservationists and ethical wildlife managers who provide an essential public service.

Pacelle has told the Associated Press, “If we could shut down all sport hunting in a moment, we would.” He wasn’t concealing his agenda when he told the Bozeman Daily Chronicle, “Our goal is to get sport hunting in the same category as cock fighting and dog fighting. Our opponents say that hunting is a tradition. We say traditions can change.”

Borrowing from the playbook written by those who have been campaigning for decades to strip honest, law-abiding Americans of their Right to Keep and Bear Arms and right to self-defense, Pacelle has chosen an incremental approach. As his quote to the Associated Press indicates, he well knows that he cannot end all hunting tomorrow. Instead, he campaigns to end it one species, method or jurisdiction at a time.

HSUS lobbies elected officials and bankrolls ballot initiatives to end hunting for species like dove, cougar, bear and deer. It claims that bow hunting is inhumane and causes far too much suffering to remain legal. Of course, this suggests that other hunting implements such as rifles are somehow acceptable to the group when nothing could be further from the truth. It told the Washingtonian “[T]here is no rational basis for maintaining a moral distinction between the treatment of humans and other animals.” Using hounds and trapping are a couple of the methods of taking game routinely targeted by the group.

To HSUS, hunting is never an appropriate means of managing overpopulated species. It would rather see the government use expensive and unproven contraception methods to control deer populations or harass marauding bears with loud noises and rubber bullets, as is currently being done unsuccessfully in New Jersey to the tune of nearly one million dollars per year. Of course, the harassed bears simply move from the garbage can where they are being annoyed to one where they are not. Such inadequate efforts endanger lives by enhancing the probability of vehicle/animal collisions and encounters with aggressive predators.

Our hunting heritage faces many threats; therefore, it is important that state constitutions offer meaningful protection against those threats. It is time that Right to Hunt amendments address these specific threats in order to ensure, to the extent possible, that activist judges don’t interpret the provisions to mean nothing, as some of them have had a history of doing with regard to our Right to Keep and Bear Arms.

As is the case with the general provisions adopted by the voters in eight states since 1996, NRA-ILA’s model language refers to the people’s right to hunt and fish, subject to laws and regulations. However, our model language requires that the restrictions be “reasonable.”

The intent is to ensure that science and objective management practices, not emotion and politics, drive the development of hunting regulations. Examples would include the adoption of hunting seasons and bag limits, distinction between male and female animals, imposition of penalties against violators and the assessment of license and tag fees for conservation and enforcement efforts.

In order to defend, for example, against future proposed bans on the hunting of doves or bears, use of archery tackle, or dogs for hunting, the model language provides specific protections for the hunting of “traditionally pursued” species using “traditional methods.” To protect against states turning to taxpayer funded sharpshooters, blow horn-armed agitators, and contraception methods first as a means of wildlife management, the model language also explicitly states that public hunting and trapping is the preferred means of controlling wildlife. This does not rule out other practices where appropriate.

Together, the NRA-ILA model language offers real protections against clear and present dangers posed by Pacelle and his clan. If you’re a hunter in Tennessee and a politically motivated dove hunting ban is proposed—like the one HSUS successfully helped to pass in Michigan—would you rather have a constitutional provision that generally recognizes your right to hunt pursuant to laws and regulations, or one that recognizes your specific right to hunt doves (traditionally pursued species)? Our model language offers far less room for an activist court to find reasons to side with ban advocates.

Opposition to the NRA-ILA model language is coming from some disappointing sources. Game commissions and agencies in Arkansas and Tennessee have officially opposed proposed amendments that have been introduced in the state legislatures. One official with the Tennessee Wildlife Resources Agency (TWRA) might have been too frank in 2005, when he argued that the agency would oppose any constitutional right to hunt because it might need to ban certain types of “unpopular hunting for political reasons.” His example at the time was hunting with hounds, but how long before the same supposed justification could be used to ban bow hunting after HSUS engages in a well-funded and sophisticated Nashville media campaign depicting the “inhumane aspects” of this traditional method?

Unwittingly, the official could not have advanced a more compelling argument in support of a truly meaningful Right to Hunt amendment. Unfortunately, government entities rarely, if ever, voluntarily relinquish power once they have acquired it. The ability to ban certain types of hunting for political reasons is one power TWRA will indeed lose if the model language is adopted. This would be a very good thing for hunters and for TWRA, whether it knows it now or not.

Other opposition has come from “sportsmen’s” organizations that are too closely aligned with the game commissions and agencies. If they support the adoption of any Right to Hunt amendment, it is the general language of the past. These are the versions that might protect hunters against an outright prohibition of all hunting but, unlike the NRA-ILA model language, very well could allow bans on the hunting of certain species or prohibitions of certain methods. After TWRA’s unqualified opposition to any right to hunt in any form, it should concern hunters in the Volunteer State that it is now neutral regarding the general language. This suggests that the agency believes that the general language does nothing to curb its current power.

These organizations and their agency or government partners also contend that the risk of legal challenges to common game regulations is too great if a Right to Hunt is adopted. While this has not been the case in any of the nine states with existing constitutional provisions, little is ever gained without some risk. Regardless, the real risk is for the good guys to do nothing.

Some citizens, elected officials, game commissioners and even sportsmen argue that the effort to enshrine the Right to Hunt in state constitutions is not necessary. In many states, they feel secure in the ability of future generations to head to their favorite duck blind or deer stand.

Fortunately, James Madison and the rest of our country’s founders did not hold a similar shortsighted belief when they wrote and ratified the First and Second amendments to the U.S. Constitution, as part of the Bill of Rights.

In 1789, no one questioned the freedom of the press or the individual citizen’s right to free speech or to keep and bear arms. After all, the combination of these thoroughly exercised rights won that generation, and our country, its freedom.

As we saw earlier this year in Washington D.C., James Madison’s words, written more than 200 years ago, were used by the U.S. Court of Appeals to strike down some of the most draconian firearm laws in the land—laws that left citizens defenseless against criminals for more than three decades.

In the same vein as the attacks on the rights of citizens to keep and bear arms over the last many decades, attacks on the hunting traditions of the people of Tennessee, Arkansas and the rest of the states will come. You need only ask the sportsmen in states such as Maine, New Jersey, Michigan, Colorado, California, Oregon, Florida, North Carolina, Maryland, Arizona and Alaska. They have all weathered the assaults, some better than others.

It is time to exercise some of the same foresight associated with the adoption of the Second Amendment and the Right to Keep and Bear Arms constitutional provisions found in 44 state constitutions. It is time to begin adopting new and improved amendments recognizing our Right to Hunt.

Man has been hunting since the beginning of time, at least as we know it. This was well documented on the walls of caves and, more recently, through science. The only question is whether we will be hunting until the end of time. Legislators and voters who will be considering meaningful constitutional amendments safeguarding the Right to Hunt hold the answer. NRA-ILA will be working hard with your help to ensure all future generations will enjoy the thrill of the hunt and all the benefits it brings.