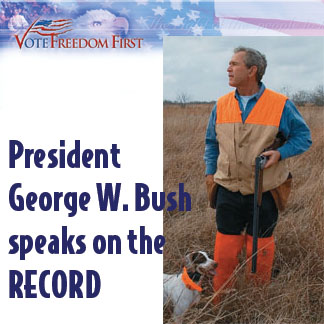 NRA: In the early days of your Administration, you had to engage a United Nations that actively sought to import international gun controls to America. What can you tell us about the response you sent the U.N.?

President Bush: In the United States we have a long tradition of hunting and sport shooting. The Vice President and I both love to hunt and fish. I understand that some countries do not have that kind of tradition, but we objected to having the United Nations try to impose international regulations that would violate the Second Amendment and infringe on our sovereignty. My Administration objected strongly.

NRA: Also early on in your Administration, Attorney General John Ashcroft stated his view "that the text and the original intent of the Second Amendment clearly protect the right of individuals to keep and bear firearms." This was a clear reversal, was it not, of the Clinton Administration's position?

President Bush: It was a clear reversal. It was a position that needed to be reversed—the prior Administration had taken the position that the Second Amendment only applies to state militias and doesn’t protect an individual right to bear arms. My opponent issued a press release earlier this year supporting that exact same position. I know that’s not what the Constitution says. The Constitution gives people a personal right to bear arms. So we did reverse the Clinton Administration’s position, and I think that was the right thing to do.

NRA: When you ran for Governor of Texas, you promised to fight for a Right-to-Carry law. You fulfilled that promise. Why did you think enacting the law was important?

President Bush: I signed the Right-to-Carry law when I was Governor because I knew it would make Texas a safer place, and it has. In fact, just this year I signed legislation allowing law enforcement officers to carry concealed firearms as they travel throughout the United States to better protect the Nation from criminals.

President Bush: We are making real progress. In the past three years, Federal gun prosecutions have increased 68 percent. We have devoted over $1 billion to Project Safe Neighborhoods, which is my strategy for bringing together Federal, state, and local officials to fight gun-related crime. And I think it proves what I’ve been saying all along, which is that the best way to crack down on criminals who use guns is to vigorously enforce existing gun laws. We did it, and it’s working.

NRA: Both you and Vice President Cheney are life-long hunters and fishermen. Has that fact helped guide your Administration policy of expanding access to federal lands for hunters and anglers?

President Bush: Yes. When I came into office, I wanted Federal lands policy to take a different direction—that is, I wanted balance, allowing responsible recreational activities while conserving and protecting our natural resources. As a life-long hunter and fisherman, I felt it was important to provide sportsmen with access to federal lands and provide a strong commitment to protect the lands they use.

Because I trust sportsmen—who, by the way, are the original conservationists—I expanded hunting and fishing access at more than 60 National Wildlife Refuges, and my Administration signed an agreement with 17 major sportsmen’s organizations to improve hunting and fishing access to Federal lands. There are some who oppose these efforts—animal rights activists are currently challenging public hunting programs on 37 National Wildlife Refuges. I think this effort is misguided, so my Administration is opposing their lawsuit. Over 30 of our hunting and fishing conservation partners have voiced their opposition to this lawsuit on our behalf.

In addition to providing greater access, I have initiated a conservation agenda. I signed the Healthy Forests Restoration Act into law, which is reducing the risk of catastrophic wildfire in national forests. Earlier this year I also announced a new national goal to create, improve, and protect at least three million wetland acres over the next five years. As part of that effort, I recently announced a set-aside in the Conservation Reserve Program to help protect 250,000 acres of grasslands, which are home to several species of birds, including the northern bobwhite quail. By expanding this program, we hope to see the quail population increase by about 750,000 a year. USDA will offer early re-enrollments and extensions for farmers whose contracts start expiring in 2007, which is especially important in the Prairie Pothole Region—an area that is vital to duck populations.

NRA: A top NRA priority this year was passing the "Protection of Lawful Commerce in Arms Act," which had broad bi-partisan support, because most Americans realize that attempting to hold the American firearm industry responsible for the acts of violent criminals is wrong. The Bush Administration strongly supported this legislative remedy, but your opponent in this year's election helped defeat the bill. Any comment?

President Bush: I don’t think it’s right to take the manufacturer or seller of a product that is legal and that isn’t defective and hold them liable just because the user committed a crime or engaged in unlawful activity. If we start holding entire industries responsible for the actions of criminals, we risk Americans losing confidence in our laws, and we’ll diminish our basic constitutional liberties. Junk and frivolous lawsuits like that are an abuse of the legal system. They kill jobs and hurt the economy.

I strongly supported passage of the Protection of Lawful Commerce in Arms Act because it would prevent frivolous lawsuits against gun manufacturers and protected the thousands of workers that they employ. I thought the legislation struck just the right balance—it got rid of the frivolous lawsuits while carefully preserving the right of every American to have their day in court if a product was really defective or if a gun manufacturer or distributor really did something that was wrong.

My opponent flew back from the campaign trail to Washington to vote against that Act—one of the only two votes he cast all year long. He has received more money from trial lawyers than any other Senator in the last 15 years and, of course, he picked a trial lawyer as his running mate.

NRA: Your opponent says he believes "in the right to bear arms as it has been interpreted in our country." Why do you think he finds it necessary to add that qualifier?

NRA: Exactly what principles will guide you in your selection of nominees to the federal bench, including, of course, the United States Supreme Court?

President Bush: I will appoint qualified men and women to the Federal bench, men and women who will strictly interpret the Constitution and not legislate from the bench. When I make a nomination I take a close look at their qualifications and a close look at their judicial philosophy. But I don’t think it’s right to use litmus tests like my opponent would—it’s just not appropriate to ask a judge exactly how they would rule in future cases. If you take a look at my nominees and the job they’ve done, you’ll see they have an excellent record of strictly interpreting the Constitution and applying the law properly.

NRA: Mr. President, we deeply appreciate the valuable time you have given us. Do you have any final words for our members?

President Bush: I would just remind your members that their votes matter. This is a historic moment in history. We’re helping to change the world for the better by spreading freedom. It’s hard work, but it’s necessary work, and it’s work that will succeed, because I believe that freedom is the Almighty God’s gift to each man and woman in this world.

This young century is going to be liberty’s century. By promoting freedom at home and abroad, we’re going to build a safer world, a more hopeful America. By reforming our systems of government, more Americans will be able to make their own choices and realize the dreams that are available in this country. We’ll continue to spread ownership and opportunity to every part of our country. We’ll pass the values of our Nation on to a new generation, and we’ll work for peace and freedom. So the choice is clear. I need your members’ help, and I’m asking for their vote on November 2.