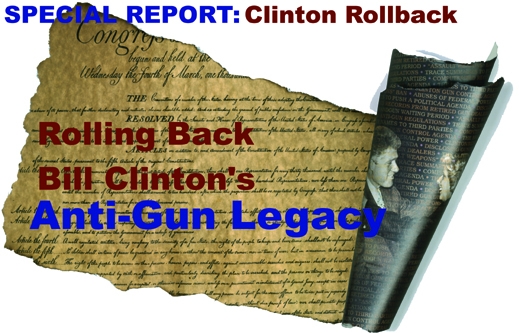 Reversing anti-gun regulations imposed by the
Clinton-Gore-Reno Administration is a major
victory for law-abiding Americans who
exercise their Second Amendment rights.

The omnibus appropriations bill passed by the Senate in January contains several important reforms in federal gun laws to protect the privacy of people who lawfully exercise their constitutional rights. Most of the reforms undo abuses of federal power introduced in the Clinton era.

First, the bill--which passed the House in 2003 and was sponsored by Rep. Todd Tiahrt (R-Kan.)--requires that federal records on lawful gun purchasers approved by the National Instant Check System (NICS) be destroyed within 24 hours. When Congress created the NICS in 1993, it added an amendment to require destruction of records on law-abiding gun owners: "No department, agency, officer, or employee of the United States may . . . use the system established under this section to establish any system for the registration of firearms (or) firearm owners . . . ."

The 1993 law reinforced the Firearms Owners' Protection Act of 1986 (FOPA), which prohibited the creation of a registry of gun owners. FOPA mandated that no "system of registration of firearms, firearms owners, or firearms transactions or dispositions be established." Thus, the new 2004 law brings the federal government into compliance with long-standing federal statutes.

Second, the "Tiahrt amendment" reinforces existing provisions in federal and local gun laws prohibiting the release of those records that are allowed to be kept on gun owners. Federal law requires that dealers inform federal law enforcement any time a person purchases two or more handguns in a five-day period. Current law requires the federal government to keep private the names of lawful purchasers.

In early 2003 the Supreme Court was on the verge of hearing a case involving the city of Chicago's attempt to obtain the name of every multiple handgun purchaser in the United States. After the case had been briefed, but before oral arguments, Congress passed an appropriation with a very specific prohibition on the release of purchaser names. In light of the appropriation language, the Supreme Court sent the case back to the lower courts.Sometimes the Bureau of Alcohol, Tobacco, Firearms and Explosives (BATFE) traces a particular gun at the request of law enforcement. The trace may involve an attempt to find the owner of a stolen gun or to learn more about a gun seized from a criminal or it may involve a gun seized for a paperwork offense (such as failure to register the gun in some jurisdictions). BATFE traces can be useful in some cases, but they are not representative of the broad universe of guns used in crime.

The Tiahrt language requires BATFE to disclose the necessary caveats in published summaries of firearm trace data--thus preventing BATFE from using trace summaries to push a political agenda, as it did during the Clinton years.

The appropriations bill also forbids disclosure to the public (but not to law enforcement) of particular trace records. Chicago had sought these records, too. As the Solicitor General argued in his Supreme Court brief, many of the people whose names are in the trace database are innocent of any wrongdoing; for example, they may be listed on the trace forms because they were witnesses to the crime in which the traced gun was used. Accordingly, their privacy should not be violated by disclosing their names to third parties.

Because the federal Freedom of Information Act has no restrictions on who is seeking the information--or why they want it--if Chicago had prevailed in the Supreme Court, and if Congress had failed to act, then anyone (including burglary rings or anti-gun lobbyists) could have obtained the name of every multiple handgun purchaser and every person named in a trace request.

When a person buys a gun from a retail dealer, the dealer is required to fill out federal Form 4473, which contains a record on the gun buyer's identity, and the model and serial number of the gun. According to current federal law, the forms may be inspected at any time pursuant to a law-enforcement investigation. The forms may also be inspected as part of annual administrative review of a gun dealer's compliance with record-keeping requirements.

Gun dealers are required to retain the forms for 20 years. When a gun dealer goes out of business, he must send the forms to BATFE. Under the Clinton Administration, BATFE began creating computerized records of the forms from retired dealers. This computer database violates the 1986 law against creation of gun-owner registries. Accordingly, the Tiahrt language prohibits the expenditure of funds for the computer database.

By enacting these reforms, Congress has taken an important step toward undoing the damage of the Clinton years. The rest of the Clinton gun-control agenda appears to be dwindling, too. The Brady handgun waiting period expired in 1998 and was replaced by NICS, which is now registration-free. Many Capitol Hill analysts believe that the federal ban on so-called "assault weapons" (cosmetically incorrect guns) will sunset by its own terms on Sept. 13, 2004.

Thus, on Sept. 14, 2004, Bill of Rights activists may wake up to find that the Clinton anti-gun legacy has been almost entirely erased. As President Ford once said, in a different context, "Our long national nightmare is over."