The Bias Against Guns 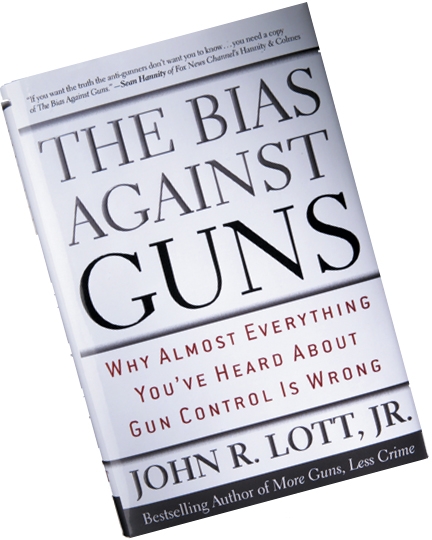 Lott looks at the firearm debate from the perspective of an economist--;the tradeoff between the costs vs. the benefits of civilian firearm ownership--and he finds the benefits far outweigh the costs. His outlook is coldly unbiased; he draws logical conclusions from his research and offers public policy suggestions that include repealing harmful firearm laws.

We haven`t seen a rebuke of counter-productive gun laws articulated so compellingly since Lethal Laws, which the mainstream media ignored, was published a decade ago. However, because of Lott`s scholastic and scientific status, his research has been impossible to suppress. His detractors in the anti-self-defense lobby responded predictably with ad hominem attacks. As his research and outspokenness regarding the benefits of private firearm ownership continue to erode the propaganda of the pro-control forces, the hoplophobe hysteria continues to mount.

Both personal and academic assaults have palpably increased over the past year. Lott`s ordeal has led him to conclude: "Over time, I have come to believe that the ultimate objective of most gun control advocates is to gradually eliminate the private ownership of guns."

Lott backs up politically incorrect policy recommendations with science. He notes: "My role as an economist is not to consider whether Americans have a `right` to own guns, to keep them unlocked, to sell them at gun shows, to carry guns with them wherever they go, and so on. My only objective is to study the measurable effect that gun laws have on incidents of violence, and to let the facts speak for themselves." And he does just that, so well that the non-scientifically-minded reader will generally have no trouble following the scientific explanations. Science becomes very simple when your goal is to tell the truth, regardless of the political consequences.

We note, however, that when responding to the latest attempt to discredit the efficacy of relaxed concealed-carry laws, Lott`s style became too scientifically detailed for the average reader to grasp. John Donohue and Ian Ayres are the first researchers purporting to show that right-to-carry laws result in an increase in crime rates; Lott dissects in detail their "unusual" statistical approach. You`ll need to read Lott`s refutation of the Donohue/Ayres analysis several times, although those with a semester of statistics under their belts will surely have an easier time of it.

David Mustard, co-researcher in the original 1997 Lott-Mustard study on the concealed carry of handguns, articulated Lott`s scientific defense in a more readily understandable manner. Mustard`s rebuttal of the specific criticisms directed at Lott can be found in Evaluating Gun Policy (2003), edited by Ludwig and Cook.

Mustard cut to the chase by pointing out that there have been major changes in recent right-to-carry laws that would tend to cloud the statistical picture as presented by Donohue and Ayres, such as increased fees, increased training requirements, a greater number of "gun-free" zones, and stiffer penalties for those who carry in forbidden zones. He noted: "To the extent that these more restrictive laws reduce the carrying rate and the opportunities for self-defense, laws implemented later may be less efficacious."

The Bias Against Guns contains a section wherein Lott provides ironclad documentation of the media bias against firearms, and the media`s concerted efforts at non-reporting of the utility of guns in the hands of ordinary citizens. While acknowledging the needs of the media in reporting the news, and that bad news sells, he proceeds to provide example after example where a clear bias against guns is undeniable, especially when it concerns children. He adds: "The notion that gun control laws might be counterproductive is never given any credence."

Lott describes government bias in firearm research, and offers clues on spotting such bias. For example, an immediate tip-off is whether or not the research considers the benefits of firearm ownership. His discussion on causation and correlation helps the reader to identify many of the fallacies of firearm research.

Lott devotes a great deal of discussion to government funded research about children and guns, and skillfully debunks the conventional wisdom that children and guns never mix. He describes studies that are designed to incite fear of firearms among the populace. In assailing ". . . the eagerness of the government to affect the debate in a biased, potentially dangerous way," Lott chides that "flawed biased studies like these endanger lives." In addition to research on the 10 most-used guns in crime, Lott suggests that government should also address the question of the 10 most-used guns for self-defense.

Our prediction is that you will plow through this book in a day or two. If you`ve written letters to the editor in the past, you`ll have lots of ammunition to poke fun at those who call for more "reasonable" laws. And if you haven`t done so yet, when you decide that the time has come, you will not only have the facts you need at hand, but will be able to state the case forcefully, just as Lott has done.

According to Lott, "The issue with guns isn`t whether there are benefits or costs. Clearly both exist. Rather, the question is which of these two effects is greater." And his question, and not-so-surprising answer, has thrown a monkey wrench into the plans to disarm civilians. Readers who understand human nature and the mechanism of deterrence will find validation for everything they have intuitively known. As Lott has done in the past, he does so again with an unparalleled intensity.

Buy The Bias Against Guns quickly. If the hoplophobes have their way with the First Amendment as they already have had with the Second Amendment, there may be a one-month waiting period for purchase of the book. And in New York City and California, it might even be banned!