“Assault Weapon”— The All Purpose Pejorative

“Assault weapon” is a meaningless and politically elastic term.

Demonstrating that the agenda drives the definition, President Biden’s nominees to lead the Bureau of Alcohol, Tobacco, Firearms and Explosives (ATF) both refused to commit to any intelligible definition. David Chipman, Biden’s initial and unsuccessful choice for ATF director, famously flubbed a straightforward request to define an “assault weapon” during his Senate confirmation hearing. After telling Sen. John Kennedy (R., La.) that he believed in banning “assault weapons,” Chipman was unable or unwilling to say what he meant by that phrase.

Biden’s followup nominee, Steven Dettelbach (confirmed as ATF director on July 12) said at his hearing that he, too, called for a ban on “assault weapons,” but when pressed for details admitted, “I haven’t gone through the process of defining that term” (here, starting at 2:18:09). Senator Tom Cotton (R., Ark.) responded that “it’s very telling that you’re nominated to lead the ATF, and you don’t have a definition of assault weapon… Point is that there is really no such thing as a category of weapons known as assault weapons.”

Earlier this month, the Associated Press Stylebook tweeted out an “AP Style Tip” on the usage of “assault rifle” and “assault weapon.” The AP Stylebook, described as the “definitive resource” for journalists and other communication professionals, provides “fundamental guidelines” for navigating “complex and evolving language questions.”

The tweet was a reminder that two years ago, a stylebook revision recommended that using the terms “assault rifle” and “assault weapon” to describe firearms be avoided. These are “highly politicized terms that generally refer to AR- or AK-style rifles designed for the civilian market, but convey little meaning about the actual functions of the weapon.” The “preferred term for a rifle that fires one bullet each time the trigger is pulled, and automatically reloads for a subsequent shot, is a semiautomatic rifle.” An automatic rifle “continuously fires rounds if the trigger is depressed and until its ammunition is exhausted.” “Where possible,” those reporting on guns should “state what the gun does.”

One consequence of the sloppy, arbitrary, and misleading language that gun control advocates have used to describe ordinary hunting and sporting firearms is the complete lack of public consensus on what “assault weapon” means. A 2013 survey that asked adults to “describe an assault weapon” in just a few words yielded an astonishing range of inconsistent, contradictory and downright peculiar answers. Some respondents thought it meant “automatic weapons” exclusively. Other responses included descriptions like “fires rapidly” (27%), “fires multiple rounds” (17%), “powerful/dangerous gun” (15%), “military-style weapon” (13%), “semi-automatic” (7%), “any weapon, i.e. knife or gun” (8%), and pretty much anything and everything (“a gun, a bat, a stick,” “a gun,” “shotgun,” “rifle,” “ones that can shoot longer bullets,” “anything that is not a pistol,” “a weapon that was conceived illegally,” and “well just what it says the word assault” – the long list is here).

The AP Stylebook approach, we hope, is a step towards eliminating this confusion and promoting greater precision in language, fairness, and a heightened recognition of bias in reporting on firearms.

Voters should keep all of this in mind as the Biden Administration pushes forward on yet another gun control bill, H.R. 1808, the Assault Weapons Ban of 2021, which would generally make it a crime to knowingly import, sell, manufacture, transfer, or possess a “semiautomatic assault weapon.” The crux of the bill is a contrived, expansive definition of assault weapon that goes beyond what was covered in the 1994 assault weapon ban, and would outlaw a wide range of currently lawful semiautomatic rifles, pistols and shotguns, including a blanket ban on all “AR-15 types” of rifles, regardless of features, and any “copies, duplicates, variants, or altered facsimiles with the capability of any such weapon” (whatever that means).

There are many excellent reasons why you should oppose this bill, as we’ve explained separately, but we can add one more. Ignoring the indiscriminate and arbitrary labeling of firearms as “assault weapons” now paves the way for a future in which not just all guns, but knives, scissors, bats and spoons are “assault weapons,” too.

IN THIS ARTICLE
Assault Weapons and Semi-Autos
TRENDING NOW 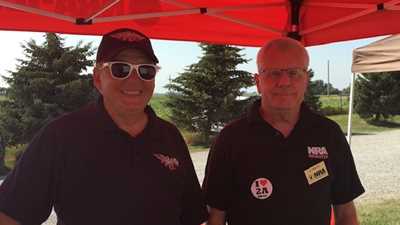