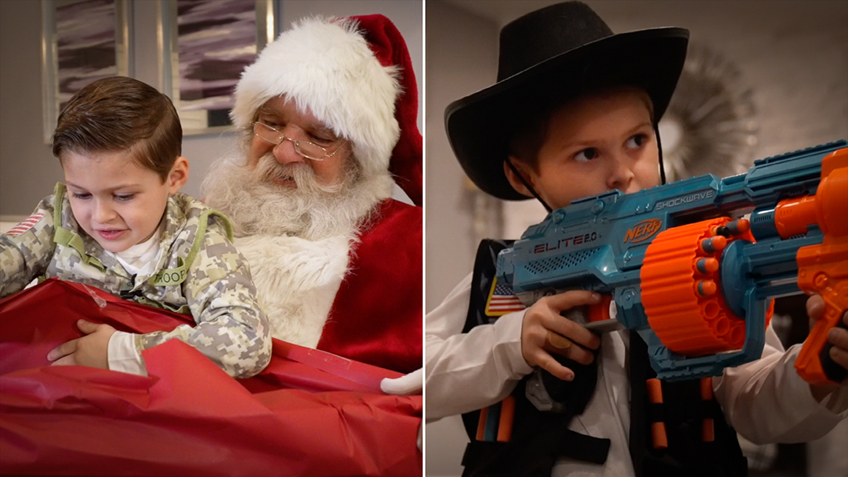 Anti-gun activists have polluted a dizzying range of human endeavors with their personal politics. Over the years, we have seen education, entertainment, medicine, media, law, banking, technology, religion, sports, game shows, even shoe sales – to name but a few – explicitly leveraged to promote the gun control agenda.

But last week may have been a new low, as the classic tradition of the department store Santa became the latest platform for a joyless scold to pontificate against guns. Even worse, the unfortunate soul on the receiving end of the propaganda was a young child reduced to tears by the bizarre encounter.

In the footage, the boy sits on a bench across from a man in a Santa suit situated at a table behind a partition of wrapped boxes and Plexiglass. The lad is obviously nervous, as is common in these encounters.

When the man asks the boy what he wants, the child’s voice is barely audible, and he has to repeat his request.

The bearded man is unmoved. “Nope, not even a Nerf gun,” he says flatly.

Shocked, the child pivots toward his mom in obvious confusion.

Meanwhile, the not-so-jolly elf continues his lecture. “Nope, if your dad wants to get it for you, that’s fine, but I can’t bring it to you.” He then suggests some other options for what he himself considers acceptable toys.

The boy, however, realizes something is terribly wrong. There is no allegation he’s on the Naughty List, and yet “Santa” is flatly denying a reasonable, common, and lawful request, obviously endorsed by the child’s own parents.

Distraught, the boy bursts into tears.

“Don’t cry,” the man orders, as the child’s mother attempts to console him.  “You’ll still get it,” she reassures him quietly. The boy, however, is devastated that the gift he most wants won’t come from Santa and dissolves even further into tears.

His mother, however, posted the video on social media, and it quickly went viral. According to a follow-up post, viewers had offered to ensure the boy got his Christmas wish.

To its credit, the mall where the incident occurred quickly realized the obvious distress the boy had suffered and the brewing public relations fiasco it was facing. The next day, it dispatched a Santa surrogate more in tune with his duties and the spirit of the season to visit the boy at his home and bring him a special gift. Video of the scene shows the boy thrilled to receive Nerf’s top-of-the line Ultra Pharaoh Blaster, replete with enhanced optics, detachable magazine, muzzle brake, and special edition gold foam “Ultra darts” with extended range.

The mall also noted in a public statement that the imposter Santa had resigned. “The Santa company,” the mall emphasized, “will continue to remind all Santa’s how important it is to not impose personal opinions during visits with the children.”

“We thought it was very kind and we’re grateful for their quick response to restore my son’s faith in Santa,” the boy’s mom wrote in an edited version of her original social media post. A friend noted in a follow-up post that the boy’s family would be glad to pass along to children in need any Nerf guns or other toys sent in response to the incident.

Thus, in true Christmas form, it seems what started as a bad situation is resolving into a positive example of goodwill and generosity. Yes, Michael, there is a Santa Claus!

And, for the record, the real Santa and his helpers have a long track record of fulfilling the wishes of good boys and girls without bias or political discrimination. Countless Americans will fondly remember receiving that special toy gun, air rifle, or .22 under the Christmas tree.

Watch how the NRA responded to the incident below.