Austin Tong was an average college kid working on his degree from Fordham University in New York City when, last week, he posted a couple pictures on Instagram that made him the target of an irrational Internet mob and a scurrilous university investigation. The pictures he posted – which nearly got him kicked out of school – were of a retired police captain who was recently killed by looters, and one of him holding an AR-15.

His posts prompted a hateful reaction from intolerant “keyboard warriors” who despise the police and the Second Amendment. Fordham University officials then opened an investigation and charged him with intimidation, making threats, disorderly conduct, and a hate crime – all for posting a picture of himself with a lawfully purchased and owned firearm and one of a slain police officer.  Now he has been banned from campus, asked to write a letter of apology, and told he must complete implicit bias and multicultural sensitivity training in order to graduate with his degree.

Today is the deadline for Austin to make his decision. He plans on saying no. And, if the university wants to kick him out, he says they’re going to have a legal fight on their hands.

Stories similar to Mr. Tong’s are happening all over America. The NRA will stand and fight for every citizen’s rights. Please consider joining or donating today to support Mr. Tong, and the NRA cause.

You were born in China and immigrated to the United States. How did that happen?

America is the land of opportunity and I think everyone around the world knows that. My parents, who came first, wanted to make a better life for themselves and their family. They knew America was a free country and people come here because of everything the country has to offer. That’s why we moved to New York.

I’ve always had an interest, mostly thanks to video games, but I never really thought about buying one before. But after recent events I thought it would be a good way to keep me and my family safe.

I’ll admit I wasn’t always a believer, but as time went on, I began to appreciate the rights we have as Americans more and more. And that’s how I got into trouble – because I expressed that appreciation.

What was it like to receive a midnight visit from the Fordham Safety Officers?

Well, I posted the pictures, received the backlash, and a few hours later received a call from the officers saying they were a few minutes away and wanted to talk. I looked out my door and saw them standing outside my home. One came in and one stayed with the car. It was basically about 20 minutes of questions about the firearm, why I posted the pictures, and what I was trying to say.

I’m a good guy, a good person, so while I was a little shook by the visit I knew I’d done nothing wrong. I knew people would probably criticize the post, but I wasn’t expecting the level of backlash, the death threats, the calls for expulsion, or that the entire school would get involved. I was shocked, appalled, and disappointed. But I didn’t do anything wrong and that’s why, if they carry through with their threats, we’re going to sue.

We’ve read about the horrible comments you received, including the death threats, but have all the reactions been negative?

No, not at all. There were a ton of nasty comments after the initial post but once the word really got out, where the NRA really helped a lot, I started hearing from the media, other Instagramers, and people from the firearm community.

That’s why I’m doing this. At first this was my case by now I think of it as the country’s. I don’t know what’s going to happen when I don’t comply with Fordham’s demands. I don’t’ know what’s going to happen to my future but after receiving all those messages from people around the country and around the world – people from all backgrounds and political parties – I knew I had to do more. They were telling me their stories, similar stories, how they were silenced or too scared to share their stories. That should never happen – not here in America.

That’s why I’m doing this. That’s why I’m standing up. When there’s no free speech then America isn’t America anymore. That’s what drives me. It’s empowering what the NRA did, what people across the country have done, and I think we’ll have a great case for protecting free speech.

Did the reaction from Fordham officials surprise you?

It did because the guy who charged me, the dean of students, he knows me. And the safety officers said I wasn’t a threat or being intimidating. They said there’s nothing wrong with me yet they’re still trying to kick me out of school.

I’m shocked and surprised because they know me. They know who I am. And I expected more from this esteemed university. 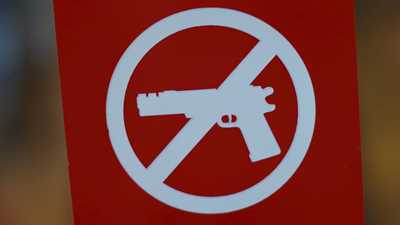