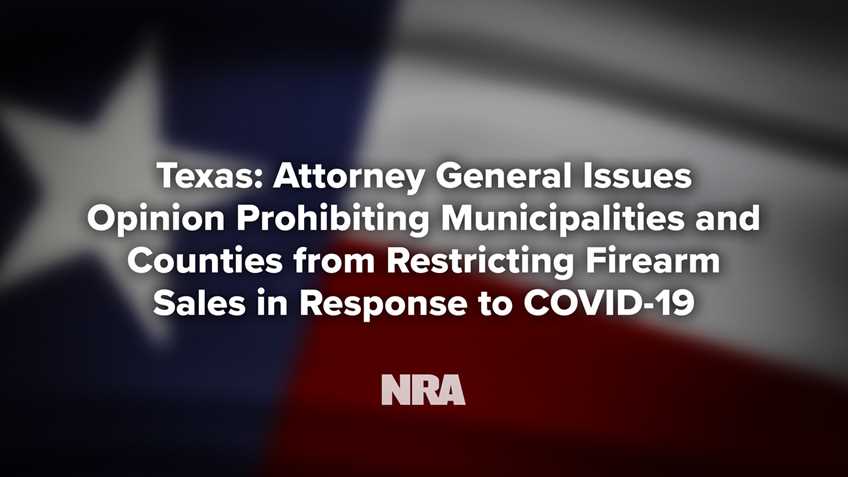 On Tuesday, March 24, pro-Second Amendment State Representative Dustin Burrows (R-Lubbock) requested an opinion from Attorney General Ken Paxton on whether city and county officials can prohibit the sale of firearms through an emergency order or declaration by excluding firearm manufacturers and retailers as "essential businesses."  Over the course of this week, local officials from Austin, Lubbock and Waco, as well as Bexar, Dallas, Harris, Tarrant and Travis counties adopted (and in some cases modified) such orders forcing some gun stores to close and denied law-abiding Texans the right to purchase a firearm for protection during these uncertain times.

Today, General Paxton issued Opinion No. KP-0296 stating that Section 229.001(a) and 236.002(a) of the Texas Local Government Code prohibiting municipalities and counties from adopting regulations related to the transfer of and commerce in firearms, and that these emergency stay-at-home or shelter-in-place orders may not regulate or restrict the sale of firearms.

Thanks go out to Representative Burrows for his timely request and to General Paxton for protecting the Second Amendment in the Lone Star State by issuing this critical opinion affirming that the state firearms preemption statute overrides these local orders.

Also, thanks go out to State Representative Travis Clardy (R-Nacogdoches) and State Senator Pat Fallon (R-Prosper) for sponsoring and passing House Bill 3231 during the 2019 legislative session, legislation which strengthened and made important clarifications to Texas' state firearms preemption statute, and to Governor Greg Abbott for signing the measure into law.

Your NRA-ILA will closely monitor the response of local governments to this opinion and keep you updated.