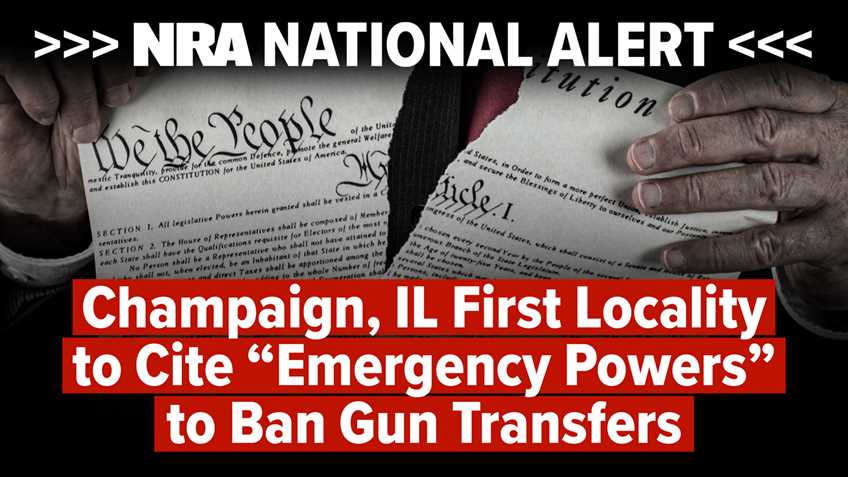 As uncertainty about the COVID-19 outbreak continues to swirl, it is clear that anti-gun extremists and elected officials will use fear of the unknown to advance their agenda to undermine our firearms freedom.  Not surprisingly, it didn’t take them long to try and quietly pass and implement gun control schemes while Americans are focused on ensuring the health, safety and welfare of themselves and their families.  ​

Today, an ordinance has passed in Champaign, IL, to empower the mayor to “[o]rder the discontinuance of selling, distributing, dispensing or giving away of … firearms or ammunition of any character whatsoever.”  This action must be swiftly opposed and NRA members in the area have been alerted and are responding to the threat.

The ordinance in Champaign serves as a warning bell to law-abiding gun owners nationwide.  We must be on high alert for any attempts to destroy the Second Amendment in jurisdictions throughout the country.

We don’t have to guess that when emotions are running high, some politicians will exploit the situation to overstep their bounds. We know this.  We’ve seen it time and time again, including in New Orleans after Hurricane Katrina, more recently in the U.S. Virgin Islands, and even in a North Carolina city in the face of unusually harsh winter weather. This is hardly an exhaustive list of such abuses.

This is exactly why the NRA has supported legislation to prevent government officials from using their “emergency powers” as a pretext for disarming the citizenry.

In 2006, then-Congressman Bobby Jindal (R-LA) led the fight to protect America’s gun owners against these abuses by introducing H.R. 5013 in the House, a final version of which was signed by President George W. Bush in October of that year. Now codified at 42 U.S.C. § 5207, the law prohibits persons acting under color of federal law, receiving federal funds, or acting at the direction of a federal employee from seizing or authorizing the seizure of lawfully-possessed firearms during a state of emergency.

The majority of U.S. states now have similar laws to prevent state and local officials from using the exercise of their “emergency powers” as a pretext to infringe the right to keep and bear arms. And even in the absence of such laws, the Second Amendment still applies by its own force.

That’s why we are asking gun owners to be alert to any attempt to leverage the fear and uncertainty around the COVID-19 outbreak to assail Second Amendment rights. If you learn of any such attempt, please contact us immediately at nra.org, [email protected], or (800) 392-8683. If possible, please include a link or reference to the proposed bill or rule in question.

We will continue to monitor the situation in Champaign, as well as the rest of the nation and alert our members accordingly.

Now, more than ever, it is essential for Americans to work together to successfully resolve the current crisis that faces the country.  Every person can play a part by keeping a cool head, staying informed with reliable sources of information, and following directives in your locality about hygiene and social distancing.

Rest assured that your NRA will do its part, too, by remaining vigilant against opportunistic actions against your rights and freedoms during this difficult time.