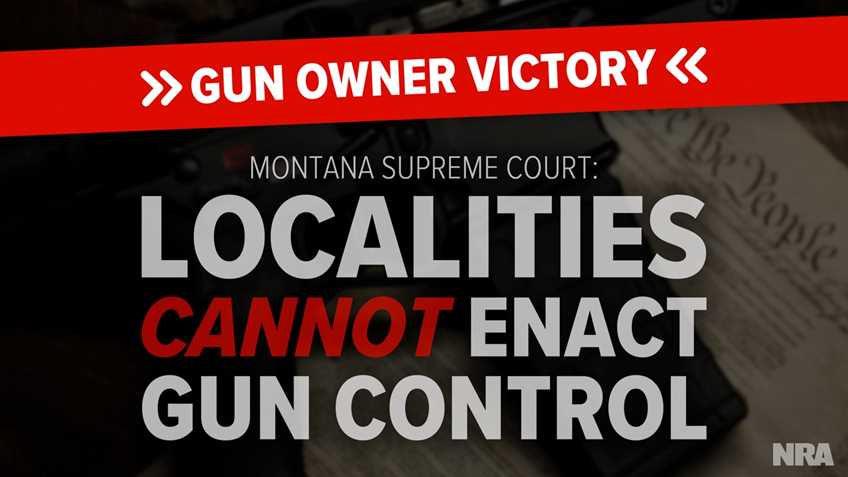 FAIRFAX, Va.–  The National Rifle Association's Institute for Legislative Action (NRA-ILA) today applauded a decision by the Montana state Supreme Court protecting the rights of law-abiding gun owners in that state. In an NRA-backed case, the justices held, in a 5-0 decision, that the City of Missoula's attempt to impose extreme gun control measures was a clear violation of state law.

"This is a huge victory for Montana gun owners and everyone who cherishes freedom in Big Sky Country," said Jason Ouimet, executive director, NRA-ILA. "The unanimous ruling from Montana’s Supreme Court confirms that politicians cannot usurp a constitutional framework by contemptuously enacting gun control at the local level.”

Montana, like more than 40 other states, has a preemption law restricting local governments from passing gun control measures that are more restrictive than state law. Preemption laws protect law-abiding gun owners from dealing with a confusing patchwork of laws that can make it nearly impossible to carry a firearm for home and self-defense.

The City of Missoula's gun control ordinance would have criminalized virtually all private firearms transfers in the city, even between relatives, friends, and co-workers.

Earlier this month, in an NRA-backed case, a Washington court similarly ruled that the state preemption law prohibits local governments from regulating the storage of firearms.

The NRA has led the fight to enact state preemption laws across the country to ensure uniformity in state gun laws.

"These cases underscore the peoples’ need for judges who will faithfully interpret the law in defense of their freedom,” Ouimet concluded.

Have we become too paranoid about mass shootings?