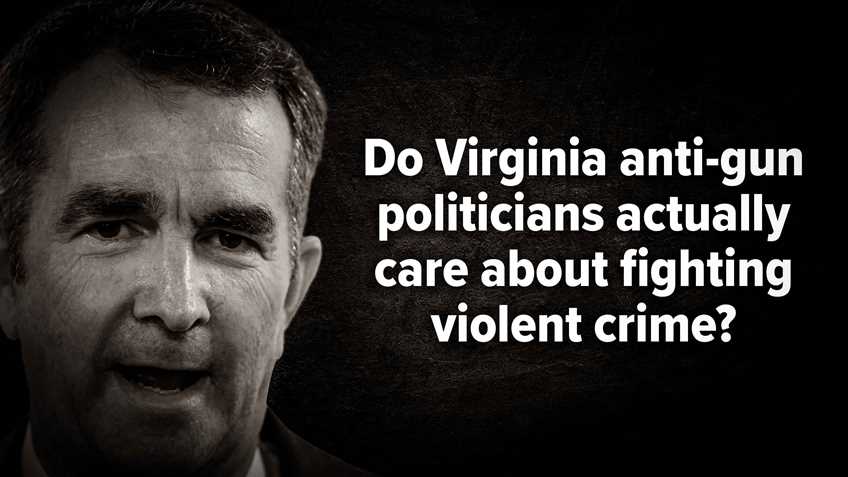 Virginia’s anti-gun politicians are serious about attacking law-abiding gun owners, but are indifferent about actual gun crime. As highlighted in a recent report in the Washington Free Beacon by Stephen Gutowski, the Virginia Department of Justice Services (DCJS) has chosen to forego almost $700,000 in federal grants to combat gun violence in order to make a political statement about U.S. immigration policy.

According to a U.S. Department of Justice memo, DCJS formally declined $665,673 in federal grant funding to avoid complying with 8 U.S.C. 1373 and 1644. The statutes makes it so that in order to receive certain federal funding, the DCJS is required to share pertinent information with federal immigration authorities.

The money had been allocated for use in Project Safe Neighborhoods (PSN). Started in 2001 under President George W. Bush, PSN is a collaborative effort, utilizing the resources of federal, state, and local law enforcement, prosecutors, and community leaders to target violent crime at the local level. Specific priorities are identified based on the local environment, and solutions are developed, with the primary objective of going after the most violent offenders and putting them in prison.

Following a high-profile shooting in Virginia Beach in May, embattled Governor Ralph Northam said violence perpetrated with guns was “an emergency here in Virginia,”and called a gun control-focused special session of the General Assembly. Northam later admitted that none of the gun control proposals he supported would have stopped the Virginia Beach shooting.

The irony of the PSN grant refusal, given the governor’s professed concerns, wasn’t lost on House of Delegates majority leader Todd Gilbert. Gilbert told the Free Beacon, “Attorney General [Mark] Herring and Governor Northam have said the loss of lives in Virginia to guns is an emergency, yet they’re willing to walk away from grant funding for a program that has been proven to work”Gilbert added, “They’re willing to put politics above saving lives. These programs work. They save lives.”

Unfortunately, the glaring hypocrisy of Virginia’s executive branch wasn’t the only news to come from the state’s anti-gun politicians this week. Richmond Mayor Levar M. Stoney continued to flout Virginia’s firearms preemption statute by announcing that he will propose an ordinance forcing law-abiding gun owners to report lost or stolen firearms at the upcoming City Council meeting on October 14.

No locality shall adopt or enforce any ordinance, resolution or motion, as permitted by § 15.2-1425, and no agent of such locality shall take any administrative action, governing the purchase, possession, transfer, ownership, carrying, storage or transporting of firearms, ammunition, or components or combination thereof other than those expressly authorized by statute.

At the very least, Stoney’s proposed ordinance would implicate the “possession”and “ownership”of firearms.

Moreover, lost or stolen reporting laws re-victimize law-abiding gun owners who are unfortunate enough to be the victims of a property crime. To place an additional burden and the threat of prosecution on crime victims in a moment of adversity is the ruthless act of a callous state that exhibits no regard for the hardship victims face as they put their lives back together.

With this week’s events, the Old Dominion’s anti-gun politicians have once again shown that they have little interest in targeting actual violent crime or respect for the rule of law.