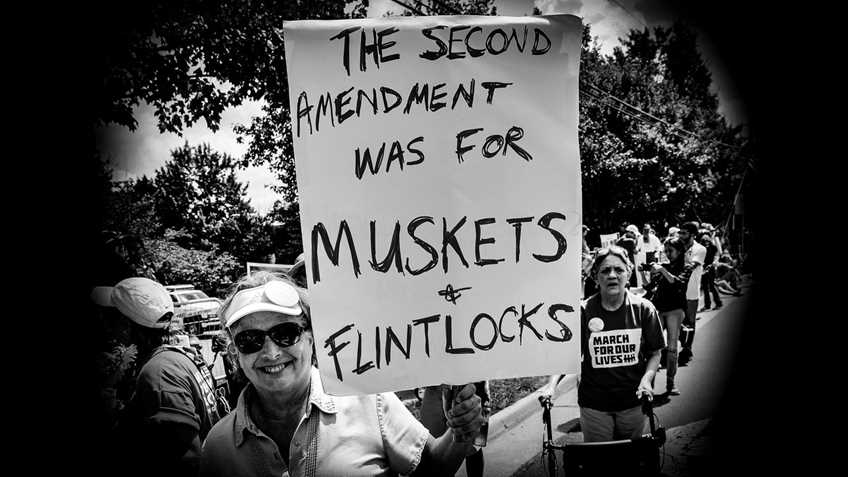 This week, March for Our Lives – the gun control group that arose in the wake of the criminal mass attack at Marjory Stoneman Douglas High School in Parkland, Fla. – released a lengthy plan outlining its vision for firearm regulation in America. Reduced to its essence, the plan is to discourage gun ownership through numerous layers of red tape, fees and government mandates.

Perhaps to their credit, March for Our Lives are more forthcoming in their proposals than disingenuous anti-gun groups who falsely profess commitment to the Second Amendment (see, for example, this week’s article on “Gun Owners for Safety”). No one can come away from reading the entire March for Our lives ”plan” with anything but the impression that the group wants to end gun ownership as America currently knows it. Even the anti-gun mass media has had to admit it is “sweeping,” “ambitious,” and “far-reaching.”

Boasting the Orwellian title of “A Peace Plan for a Safer America,” the agenda is actually a disarmament plan against law-abiding gun owners.

The centerpiece of the plan is the ever-trendy concept of a massive ban on semi-automatic firearms, coupled with a program to force formerly law-abiding owners of those guns to surrender them to the government or face punishment.

The plan doesn’t get into the specifics of which guns would be banned, how much compensation would be offered for their surrender, or what would happen to those who did not comply with this “full mandatory” scheme, but the goal would be “a reduction of our domestic firearm stock by 30%.”

Needless to say, however, any plan that by its own terms aims to have the U.S. government collect and destroy nearly 1 in every 3 guns in America must contemplate harsh treatment for anyone who doesn’t comply. Americans are not known for just casually surrendering their lawfully-acquired property and essential freedoms.

Even those who weren’t forcibly required to surrender their guns would still be subject under the plan to programs to “encourage” the “voluntary” civilian relinquishment of “handguns and other firearms.”

The plan also targets those still stubborn enough to want to legally acquire or keep a gun or ammunition. That would require a “multi-step approval process, overseen by a law enforcement agency, that requires background checks, in-person interviews, personal references, rigorous gun safety training, and a waiting period of 10 days for each gun purchase.”

Some version of this process, moreover, would have to be repeated each year that the person wanted to keep the gun.

And, of course, licensees would have to pay substantial “annual licensing fees” to atone for the high cost of “gun violence” they themselves are not committing.

Besides the licensing process, which would apparently allow licensing officials some discretion to deny even otherwise qualified applicants, mandatory disqualifiers for gun ownership would also be greatly expanded.

Young adults (ironically, the same demographic being used to market the “Peace Plan”) would be automatically prohibited. Anyone who was considered to have a “propensity for violence” would also be ineligible, a category that could be established by court records, misdemeanor convictions, and apparently even intemperate speech that did not rise to the level of a prosecutable offense.

Those who passed this rigorous licensing process, however, would still not be out of the woods. The plan would provide ongoing mechanisms of disarmament, either by license revocation or through a “federal policy” of “extreme risk protection orders” filed by family members or others who objected to the person having a firearm.

As if this weren’t enough, the plan would create a new National Director of Gun Violence Prevention, answerable only to the U.S. President, to marshal the vast resources of the federal government in support of the plan’s gun control agenda. Among other things, this official would be responsible for “educating” the pubic to reject the idea that “guns are safe products” and ensuring Americans understand that “the presence of a firearm in your home dramatically increases your chance of death.”

Characterizing “officer-involved shootings” as a “leading cause of death for young American men,” the plan even takes aim at police use of firearms and deadly force. The aforementioned director would also be tasked with promoting “stricter policies on the use of force” and directing the U.S. Department of Justice to conduct civil rights investigations of local police departments to exact “consent decrees” that subject the departments to federal oversight.

Ironically, at the same time the plan calls for additional restrictions on law-abiding gun owners and the police, it also insists on more lenient treatment of convicted criminals through criminal justice, pretrial, and sentencing reforms. The goal, in contrast to the increased surveillance and management of gun owners and police officers, would be to “lower the footprint of the criminal justice system” in everybody else’s lives.

And it just goes on an on. Most of the worst (and often discredited) thinking in gun control over the last 40 years is included in some form or fashion. For example, the plan calls for:

How would any of this be consistent with the Second Amendment?

The plan has thought of that, too. The very concept of an individual right to keep and bear arms, as articulated by the U.S. Supreme Court in District of Columbia v. Heller, would undergo a “serious rethinking.”

The U.S. Department of Justice, for example, would be required to reexamine its own conclusion that the Second Amendment protects an individual right and work toward repudiating the foundations of the Heller decision.

A “different interpretation of the Second Amendment” would also become a litmus test for the “next generation of federal judges.” The president would choose judicial prospects in concert with March for Our Lives to “develop a slate of gun violence prevention champions for federal judicial nominations ….”

Even the U.S. Supreme Court itself would face “reform” under the plan, the better to ensure that “structural limitations” did not stand in the way of the court eventually reversing the “excoriated” and “controversial” Heller decision.

But the plan doesn’t stop there. It even envisions a federally-funded “Safety Corps,” modeled on the Peace Corps, to pay legions of young activists to promote the principles and objectives of the “Peace Plan.”

The “Peace Plan” concludes by calling “on every Presidential candidate for the 2020 election” to endorse it.

So far, none of the candidates seem to have taken the bait.

But if any of them do, March for our Lives will have done the entire American electorate a favor by showing just how far some politicians are willing to go to eradicate America’s constitutional right to keep and bear arms.

IN THIS ARTICLE
March for Our Lives Gun Confiscation
TRENDING NOW