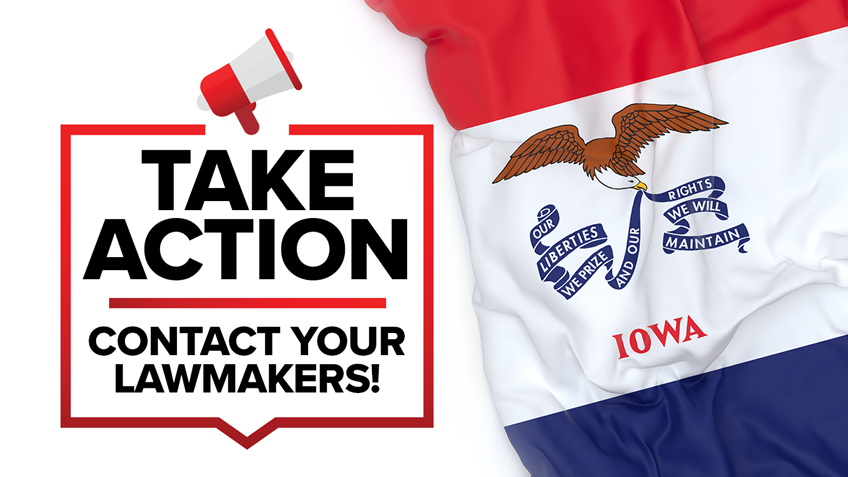 On March 13th, the Iowa state House of Representatives will hear House Joint Resolution 13 to propose an amendment to the state Constitution affirming and recognizing the right of Iowans’ to keep and bear arms as a fundamental individual right.  In addition, House File 636 to reduce arbitrary boundaries where law-abiding citizens are left defenseless and House File 716 to expand the types of cartridges that may be used for hunting are also currently in the House awaiting a hearing.  Please contact your state Representative and urge them to SUPPORT HJR 13. HF 636, and HF 716.  Click the “Take Action” button below to contact your state Representative.

Authored by Representative Matt Windschitl (R-17), House Joint Resolution 13 will need to pass during the 2019-2020 and 2021-2022 General Assembly before a constitutional amendment is put on the ballot for Iowa voters to decide in 2022.  Currently, Iowa is one of six states that do not have a right to keep and bear arms amendment in its state Constitution, including California, Maryland, Minnesota, New Jersey, and New York.

House File 636, introduced by Rep. Windschitl, would allow Iowa Permit to Carry Weapons (PCW) holders to go onto school grounds to pick up and drop off students without having to first unload and lock up their firearms in their vehicles.  In addition, it would also prevent employers from prohibiting employees to store firearms in their locked personal vehicles while on the employer’s parking lot.  So called “gun-free zones” are arbitrary boundaries that only disarm law-abiding citizens and leave them defenseless while doing nothing to affect criminals.

House File 716, introduced by Rep. Windschitl, would allow the use of traditional, “bottle-necked” rifle and pistol cartridges for hunting deer in Iowa, repealing the current restriction that only allows “straight-walled” cartridges.  This would expand hunting opportunities by allowing hunters to use commonly-owned firearms chambered in modern calibers, such as those that have been available to American consumers for over a century.  In addition, HF 716 would ensure that hunting with handguns is protected throughout Iowa.

Again, please click the “Take Action” button to contact your state Representative and urge them to SUPPORT HJR 13, HF 636, and HF 716.

Ocasio-Cortez Says She isn't Putting Moderate Democrats in a Tough Spot. They Disagree