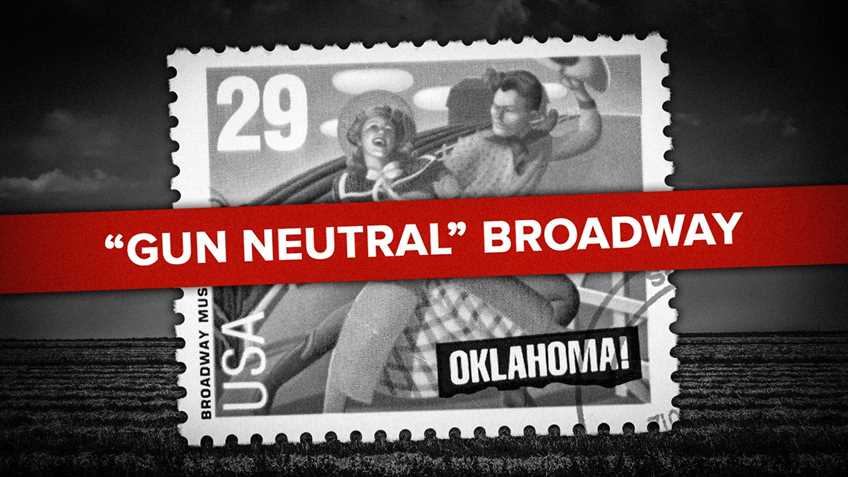 The entertainment industry’s virtue-signaling is as high as an elephant’s eye and it looks like it’s climbing clear up to the sky.

The world of musical theater isn’t exactly known for its depictions of graphic violence that glorify the misuse of firearms. However, that doesn’t mean Broadway is content to be left out of Hollywood’s latest efforts to pander to anti-gun extremists.

This week, producers for the revival of the Rodgers and Hammerstein musical Oklahoma! announced that it would be the first Broadway production to go “gun neutral.” That is, for every prop firearm that appears on stage, the producers will make a small contribution to an anti-gun organization.

Oklahoma! Producer Eva Price announced the move at the Sundance Film Festival in Aspen, Colo. during the “See Change: The Call for Gun Neutral Entertainment” panel. According to a report from WLIW, Price explained, “Just because a particular story calls for the presence of a particular weapon, that doesn’t mean that we have to remain complacent in America’s gun-violence epidemic… Helping to destroy firearms that shouldn’t be in circulation is both a privilege and a responsibility.”

In an October press release the group explained,

For each prop gun that appears in a production, financiers and producers will add a "GUN NEUTRAL" budget line item to cover the cost of destroying real-world guns and to invest in community-based arts programs targeting youth in the most gun violence-ridden communities. An average of $15 per prop gun will be charged.

The concept is reminiscent of the carbon offset schemes popularized by Al Gore and a host of celebrities in the mid-2000s, whereby elites would pay to abate a certain amount of carbon pollution in order offset their lavish lifestyles.

In concert with the Oklahoma! announcement, Gun Neutral campaigners stated,

Gun Neutral is a collective acknowledgement the creative community can and will do more, that we need a shift on this issue, and that the movement must be unshackled from politics to succeed. As we increase our understanding of the consequences portrayals of gun violence promote on screens and stage, we may re-think them. We know we instigate cultural shifts in our work. Now we will start to account for that.

There may be some value in examining how the entertainment industry depicts the misuse of firearms. However, it is hard to find the logic in how charging the producers of a 1943 musical about turn of the 20th century life on the open range $15 per gun prop might achieve any positive end.

Is there a danger that impressionable young minds will turn to violence after viewing mild western gunplay interspersed between box socials and a square dancing? Are fans of mid-20th century musical theater particularly vulnerable to Oklahoma!’s mild violence?

Rather than the type of high-minded soul searching into the role mass media might play in gun violence proposed by the gun indulgence campaigners, the Oklahoma! producers’ decision to go “gun neutral” smacks of anti-gun political pandering and has underscored the disingenuous character of the entire project.

Connecticut: Gun Control to Be Discussed Today in Joint Committee